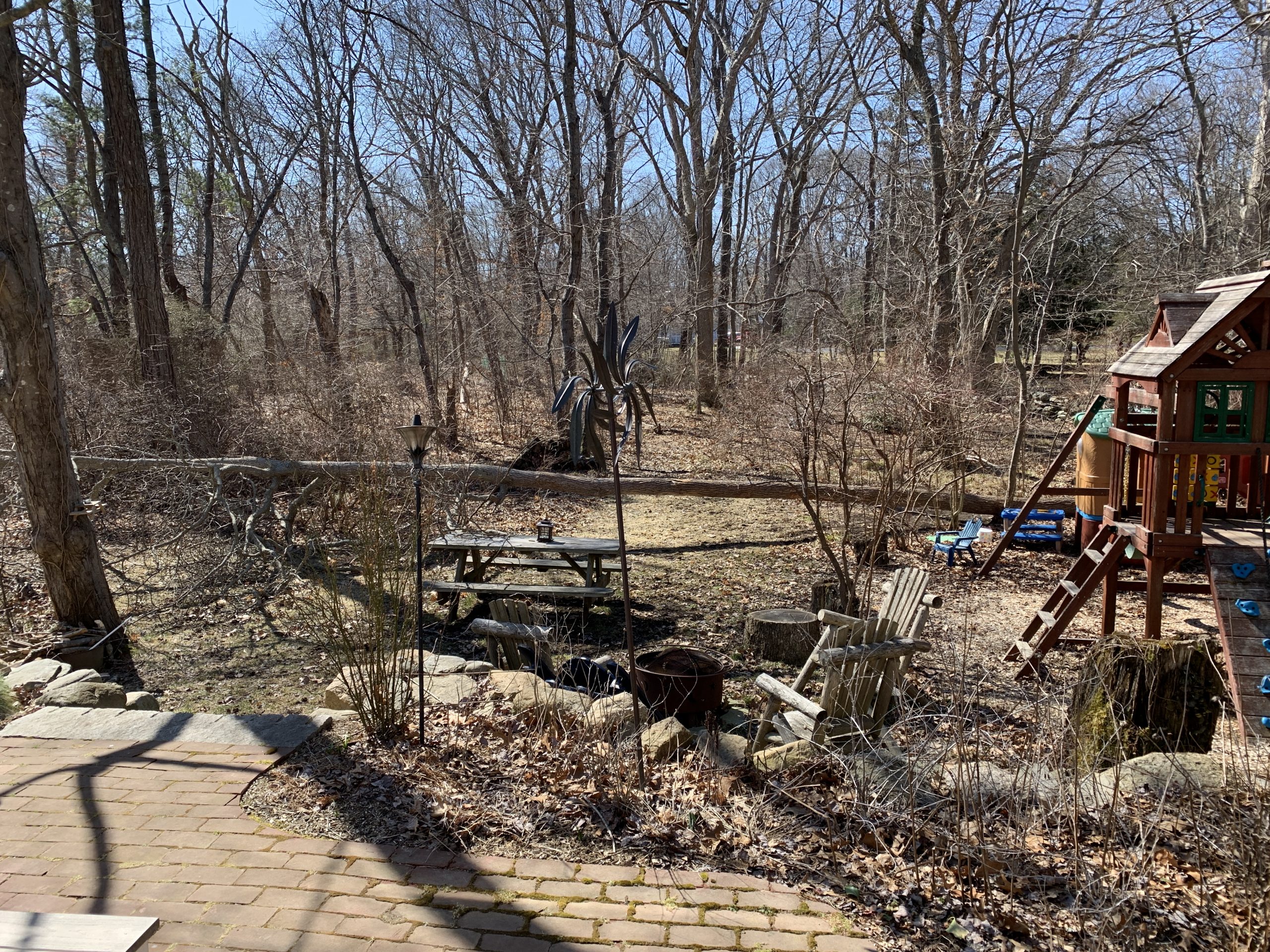 As I fully expected would happen, Mother Nature made her own determination on the fate of my leaning tree last night. The winds were strong, significant, and steady throughout the entire night; by 5AM I couldn’t stand the suspense and got up to take a look; it was down. I tried my best, but deep down I knew how it would end. And as much as I abhor losing a tree, I respect the will of nature.

So I will begin the process of dismantling the tree, probably as early as today. Branches come off first, smallest get removed for the brush pile or wood chipper, the larger ones are next and are cut and kept for burning, and then, of course, the trunk. And it will get piled up in one of my wood splitting spots to dry in the summer sun and then get split for burning. Given that sassafras is not the greatest wood to burn, I will likely intersperse the wood with other wood in the stack.

I am less than a week from my second does of vaccine and am excited about that. As of yesterday, our state has opened up doses to ages 60-64, and under age 60 if you have health issues, which makes my wife finally eligible. But the first wave of appointments posted on the website disappeared in the blink of an eye and I was unable to book hers. I expected the first week to be difficult given the population size vying for the available spots. But they will open another block of appointments Tuesday morning and I am confident I will be able to grab one then for her.

Speaking of the joys of aging, I snuck another medical procedure in this past week as well: an ultrasound of my aorta. When suggested by my doctor, I was flat out caught by surprise. Upon investigation I learned that an aortic scan is recommended for men over 65 who have a family history of aneurisms, and also for those who have smoked in their lifetime. Seeing that I am now 65, am an ex-smoker, and having been adopted and having no medical history, my doctor thought this to be a “good idea”.

It is an easy test, you really jut lay there with your shirt pulled up while the technician runs a probe back and forth and up and down. The only negative is the gel necessary to “couple” the probe to your skin, and not that it’s really a negative because it wipes right off afterwards. It is a very cool procedure. Part of my responsibilities when I was manager of quality was volumetric inspections, which included ultrasound scans. We would examine the full volume of the critical welds in the submarine for defects using ultrasound. (We also used radiographic methods such as X-ray for this purpose.)

The medical industry uses completely different techniques and equipment for their tests, than we did in ours, but the core concept is the same; it sends ultrasonic sound waves out of a probe and using the data provided by the return signal of the sound “bouncing” back, can determine differing densities and structures. Of course, it is much more complicated and technical than that simplified explanation, but that should at least give you an idea on how it works. Sort of like radar, but with different wavelengths and different frequencies. In this case, they also incorporate doppler, which allows the technician to “see” the actual blood flow inside the aorta, represented with vivid blues and reds as it pulses through the blood vessel. Absolutely fascinating to see your body’s precious fluid coursing its way out to feed the network of vessels and nourish the muscles and organs.

The intent of the test is to measure the walls of the aorta to look for a bulge in the vessel, indicating an aneurism. I believe that they also look for interior build-up on the walls of the aorta to determine if there is arteriosclerosis. While performing the scan, my technician commented that I have “a highly photogenic aorta”. So I have that going for me anyway! In any event, the test came back negative, as in no abnormalities, which was good news. I now just have one more medial test to get through, in two weeks or so – the big “B”.

I got out for a magnificent hike a couple of days ago, in fact the same day as my ultrasound scan. It was forecast to hit 60dF that day and I had a plan. The hike is either about nine miles or can go up to almost twelve depending upon the route you choose. It features the most primitive and primeval deep chasms and ravines and numerous water features; a visually stunning hike, one of my absolute favorites. But my goal for this day was the explosive breeding I wrote about just a short time ago in  The March of Spring. And after eight miles of not hearing a peep and with a mile of the end of the hike, I was blessed to witness my third episode of it.

This hike was the same hike where I encountered it for the first time and had absolutely no clue what it was until I got home and researched it. The vernal pond in which it was occurring was not the same one as the first time, and was nowhere nearly as “attended” or as loud as the first, but it was still incredible. They were clucking or chortling or quacking or however you might choose to describe it loudly enough to catch my attention long before the pond was in sight.

They heard, saw, or sensed my approach because as I drew near, there were dozens of splashes in the water as they left the shore, rocks, and branches for the safety of the pond. They did not fill the entire pond and its circumference as in the first one I witnessed; this one was about half of the pond judging by the sound, but still “well attended” to say the least. I did not linger and quickly retreated to allow them their time in peace. But I am so lucky to witness it once again! I wish you all could witness it! And even if not, I hope you get to once again experience whatever thing it is that you hold as special. Stay well dear reader!