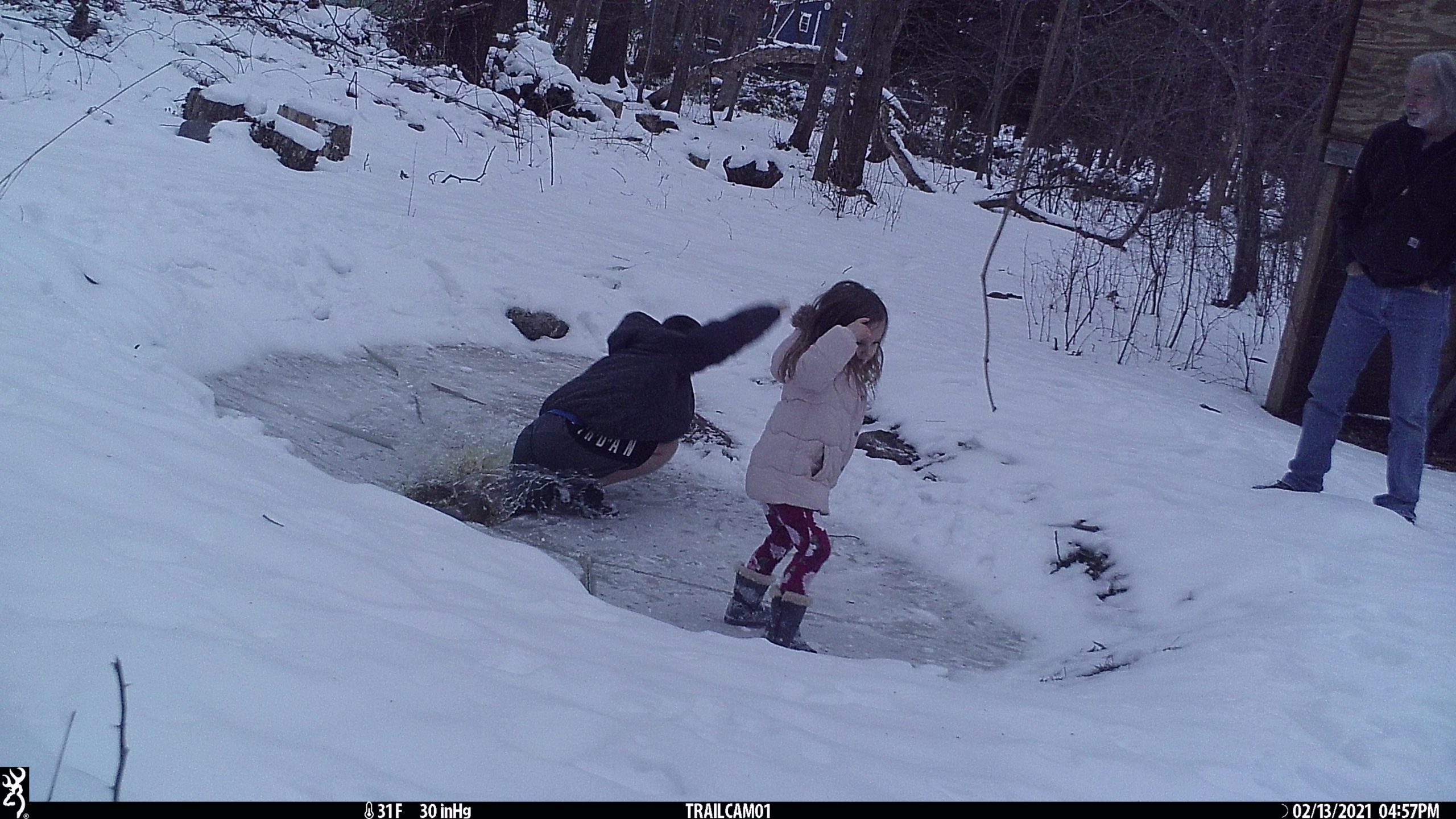 Winter has settled itself upon us like the darkness of a moonless night. The pond has a solid layer of ice, the tree limbs are all bowed with the weight of the snow on their branches, and the cold has interlaced its fingers around us with no intention of leaving anytime soon. My bamboo has gone from 12’ tall to barely 3’ high now, dragged down by the ice and snow with one barely thick stalk snapped.

I pulled the cards from the trail cams and found little by way of visitors: squirrels and rabbits are still out and active, but not much else. I did catch one pass through by a fox, but only the one trip with no repeat passage. I also caught several deer wandering over the stone wall one night, so they are still around. The opossum and racoons have completely disappeared over the last two weeks, with no a single sighting – either on camera or triggering the floodlights out back where they like to feed. To me it means they have all hunkered down, more due to the snow and ice than the cold, I think. And frankly – so have I.

Spring “arrives”, on calendar, in 36 days, and can’t arrive soon enough for me. I’ve lost the ability to really enjoy the cold of winter any more – sadly I’ve tired of it and just can’t seem to enjoy it as I used to. My digits, especially my fingers, really hate the cold and do not tolerate at all now. I still get out to move firewood around and bring it in, but not much more. I had hoped to get in at least a little hiking over the winter but so far, that has not materialized; partly the pandemic but mostly the cold.

Before you flood the comments with exclamations of outrage correctly telling me to practice what I preach, hang on a moment or two! Yes, I do constantly write about how important it is to get out into nature and take a respite from the pandemic, stress, and your daily burdens. And yes, it applies to me as well – I know that. I do get out every day and always take at least a moment to enjoy the gifts of nature. It is truly more about the recognition and appreciation than the act. It goes back to my previous post about having a Twizzlers just to enjoy a short break. But the operative word is enjoy. Taking five minutes to eat a Twizzlers would do no good if I did not like them. Likewise, stepping out into nature will do you nothing if you don’t enjoy being there.

When I was in Facilities, we had a fairly big building: 640’x215’x115’ which was basically seven acres under a massive roof 115’ up in the air. The only way to the roof was a series of metal ladders up one of the main steel columns. It was a decidedly unpleasant climb: extremely dirty with years of metallic dust from welding and burning and grinding. It was tough on the lungs – a 115’ vertical climb with ladder transition platforms in just a couple of places. And if you feared heights it was nearly impossible to go up as you were basically just hanging off a steel ladder on the side of steel column out in space. One or two sections sort of had a cage around the ladder, but the rest did not; a slip and fall would be immediately fatal.

But once you made it to the roof hatch and popped out, you were on a massive seven-acre roof with priceless views of the facility, the airport, and best of all – the bay. The views were simply amazing and no matter what nature of business took me to the roof, and no matter how hot or cold it may have been up there, I made sure to take a walk to the edges on every trip up in order to soak in the view. No matter the wind, the rain, the scorching summer sun or the frigid winter cold; if I went up, I stopped to appreciate the view. It is about taking the time to appreciate; a pause.

As are so many of my posts, this was started two days ago and then supplemented incrementally since the start. Yesterday, Saturday, my grandkids arrived. At one point my eldest decided to check out the ice on the frog pond; it has been a point of fascination for all three of them, but him in particular. After walking on it and sliding on it and running on it, he decided to jump on it. And finally, his childhood rite of passage was achieved as the ice cracked and then broke and he went in.

So first off, he did not go under; the ice parted in three large sheets, all converging on the point of failure. He fell/slid feet-first on one of them towards the opening where he dipped in up to the waist, but more horizontally then vertically. I will add that the spot where it happened was the deepest: probably a bit over his head, so I was immediately on high-alert to jump in and extract him if necessary. But I held back to allow it to play out. A kid needs to go through the ice at least once, in their childhood. It is thrilling, it is exhilarating, it is scary, and it is a huge deal it learning that you can successfully handle a really extreme situation on your own.

He scrambled correctly and in the blink of an eye was standing next to me, laughing his head off. I gave him a huge hug (or two) and told how proud I was of him. And then we ran in to get him dried off and into warm clothes. I will mention here that he was in shorts to begin with so the cold is not so much a big deal to him as it is to many.

Of course, the pond is quite small and I had little fear he wouldn’t be able to get out, should he go in. And a lot of it is shallow – only two or three feet deep. Except where he was which as I have mentioned, is pushing five feet deep at the deepest point. My point is that I knew this was a highly controllable place where I could feel OK about my grandkids falling in (which is an extremely odd thing to say as a grandfather!!)

Personally, I have been through the ice more times than I could ever recall – literally dozens, mostly all between the age of 10 and 16 or 17. The most memorable was going through the ice, on the back side of a pond, at night, alone – all the way to the bottom. That was, in hindsight, a near-death experience. But as a teenager, it was just a fun night on the pond interrupted by getting wet. I first wrote of it in detail in Call of the Wild, one of my earliest posts. Please take a moment to read it if you haven’t yet as it conveys exactly the message which I wanted this blog to deliver, about my love of nature and about our spirits, our souls.

There were no adverse effects of his brief swimming moment aside from the wet clothes and shoes, all of which dried just fine. Shortly I will go out and pull the card from the trail cam that overlooks the pond to see if it caught “the moment”; he’ll enjoy it so if it did catch the break and his fall – it will thrill him to have a picture of it. You’ll already know by now If the camera did catch it because if it did, I will make it the featured image, which you saw at the top of this post! Stay well dear reader!!