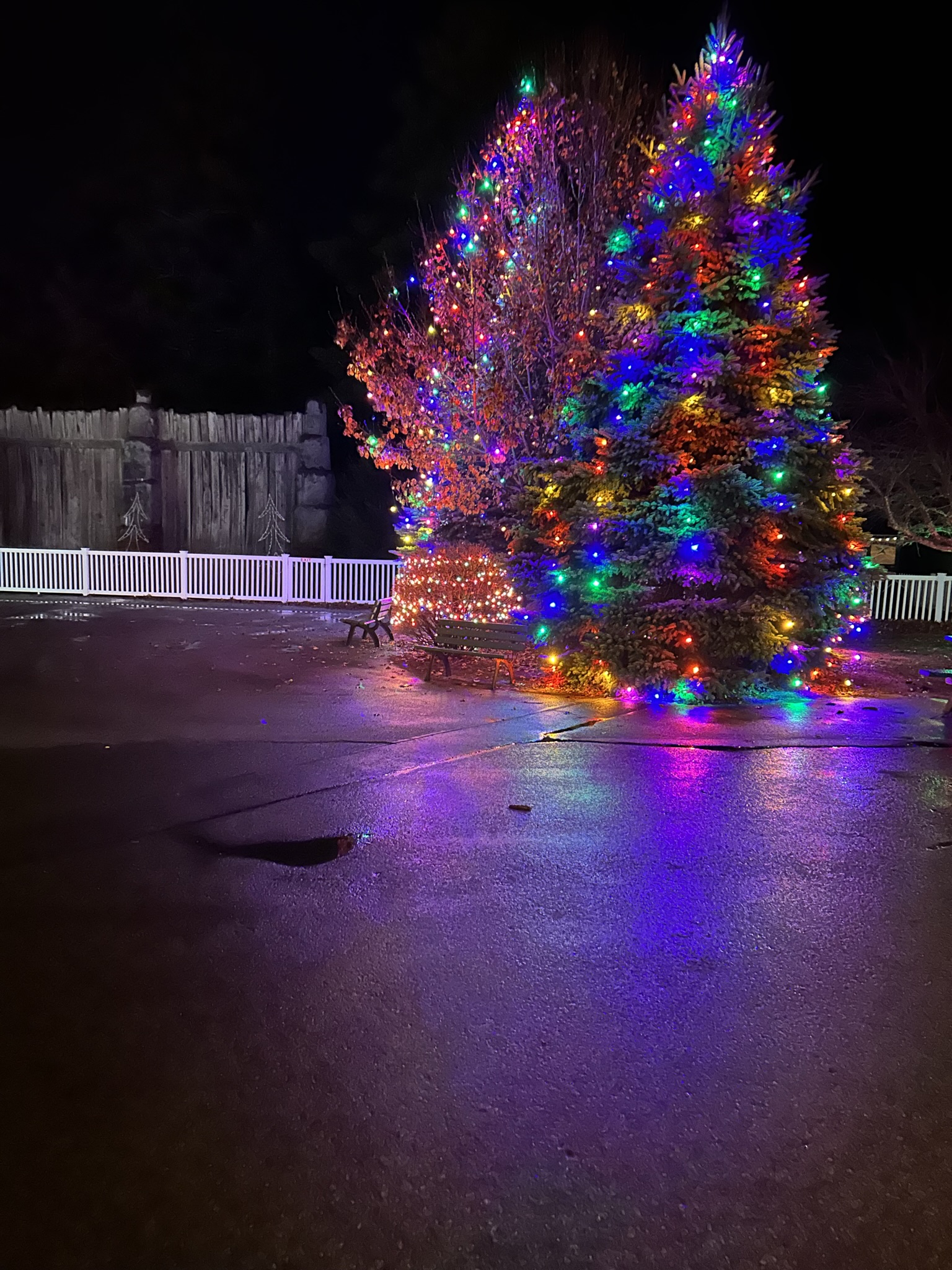 A rare respite, of the unfortunate kind; my daughter and son in law both have COVID. They are almost certain that my grandson does as well, but being under two years old, they’ve opted not to test him. So they are all at home and not in need of child care. Thus, I am off all week and find myself with time to write!

There is a family park about an hour from here called Edaville; it is a sprawling park nestled amidst pines and cranberry bogs. There are rides, a small arcade and play area, Thomas the Train Land, Dino Land, food and snack venues, and an awesome railroad that provides a 15-20 ride through the bogs interspersed with lighted Christmas displays throughout. It is a magical Christmas destination with tens of thousands of lights, music, and squealing children everywhere. I remember going with my wife’s family even before we were married at age 18. We went for a couple of years and then sort of forgot about it. I think it actually closed for a number of years.

Once I had grandchildren I saw an article about it being redone so I took my son and his family and a new tradition was born! We went every Christmas which for a while, included a special Polar Express train ride that featured a cookie, hot chocolate, and a boarding by Santa with personal visit to each child aboard to be gifted with a silver bell. Pure Christmas magic! Once they added Thomas Land and Dino Land they began opening in the summer as well.

It closed in 2020 during the pandemic and has stayed closed since. It reopened for a single day this Spring and then announced it was closed for good and being sold. The leading option for a buyer was a real estate developer looking to bulldoze it all and build houses. Happily, two men stepped up and bought the park with a commitment to preserve its legacy and to operate it far into the distant future. So the park opened again this past Thanksgiving weekend. Thomas Land and Dino Land remained closed until next year; Thomas Land rides and equipment needed maintenance and inspection that could not be done in time for the Christmas opening and Dino Land was always closed in the winter.

So bought tickets for my entire family for this past Saturday. It would be the first time for my newest grandson and we were all so excited. That morning was when my son in law tested positive for COVID. Of course, he couldn’t go and my daughter decided that she and Teddy should stay home as well as even though she tested negative that morning, they could still well have it. And of course her positive test two days later confirmed that fear.

We talked about moving all the tickets to another night so the entire family could go together, but schedules were extremely difficult for everyone. And on top of that, we had no idea when my daughter and family would be well enough go. And of course…..the weather.

So the seven of us decided to go ahead with our plans and we went. We had missed two years due to the pandemic and I think at least one or two years prior due to my failure to organize and plan the trip in time before Christmas (mostly because of the suffocating pressures at work at the time).

Getting the grandkids back there was so very important to me and we were all thrilled to be back. And it was an amazing time, even though we all missed my daughter and her family.

Tradition is so critically important in families, in societies, and in life overall. Tradition is a keel and a rudder that stabilizes and orientates “the ship” despite the winds and currents battering it. When life is besieging you from every side, we always have traditions to fall back upon – whatever those traditions may be. Certainly, holidays such as Christmas, Thanksgiving, Easter, and even Halloween (especially in my house) offer ample opportunities to establish and nurture traditions for ourselves and our families.

It provides a thread of continuity and constancy throughout our lives no matter how chaotic and beleaguered our lives may have become. They say time accelerates with age (something I have written on many times before) and it can often feel that the idea is real and factual. Of course, one minute is one minute whether it is with a beautiful woman or in the dentist’s chair; time is immutable. But… life is not. Life can absolutely accelerate, both personally and overall. As we enter adulthood, marry, have kids, and embark on careers, life comes at you at the speed of light. Work deadlines, bills, household chores, school and sport functions, and the like can leave you breathless wondering if anyone got the license plate of that truck!

Society too, can blast past you in a blaze: the acceleration of technology is at an ever-increasing pace, seemingly doubling every year. Consider my lifetime. I was born into a household with a TV; black and white but a TV none the less. Ten years later it was still a black and white TV. Color TV came along shortly after but that simple step in technology took decades. I had a B&W TV in my room as a teenager; I could receive approx. five channels – on a good day – with tin foil.

Then, in rapid succession, came cable TV, LCD screens, LED screens, HD, and a whole host of technological advances – just in the world of TV. Never mind cell phones, PC’s, and all that part of our lives. It seems that every year there is a new advance in the world of home personal electronics and they often come at a pace that all but the most tech-savvy person are left behind.

Video games didn’t exist when I was a kid; they came out just as I was transitioning to an adult (which didn’t stop me from jumping in with both feet). And at first they were simple: Pong which was sold as several different “games”, everyone of which entailed a rectangle, a square “ball”, and some number of rackets. And from that moment forward that technology exploded; look at video games today and it can be difficult to determine if you are watching a movie or a game, especially at a quick glance. The movements are fluid and realistic and the laws of physics apply to the actions taking place.

Nowadays, learning how to receive your news is a huge challenge. There is so much bias, misinformation, politicization, and flat out lies that it can be hard to know who or what to believe. Couple that with the ease these days to digitally alter a photo or video and at times one wonders if anything is real anymore. On my cellphone I can take a picture and remove a person from it, add a person to it, or manipulate in dozens of different ways. And that’s an old guy on his phone – imagine what a techie in his 20’s who cut his teeth on a high-end PC can do! So yes – life is accelerating.

And let’s not even get into the division within our society in this country; the animosity – at time abject hatred – people have for those who do not share their opinion. There is no more analog in life – it is all binary – point X or point Y, black or white – an entire society living under a bell curve but all sitting at one or the other the extreme end with no one in the middle. There is not a single issue anyone is ambivalent about any longer: vaccinate or not, liberal or conservative, climate change or not.

Of course, the truth is that no one is all or nothing. Most every human has been vaccinated in their lives; chicken pox, measles, tetanus, polio, etc. And there is nothing wrong with mistrusting a new technology in vaccines such as the mRNA. But don’t invent lies about it and don’t shame others for trusting it.

I think we all can plainly see that the weather is no longer the same weather with which we grew up. It is getting hotter, storms are getting tremendously stronger, and if you read the data from any truly scientific source (whether it’s the government or a university or even another country) you can immediately recognize that something has gone very wrong with our CO2 levels – higher by several hundred percent than ever in the last 800,000 years. But that doesn’t necessarily mean the world is ending – just that it’s different. And to do that is to get off the polar end and move towards the middle of the bell curve. You can recognize that our climate is changing but still not believe it is the end of days. There IS a middle ground.

So all this chaos and conflict pepper us in our face every day of our lives, like sand in a storm. Knowing what to believe, how to behave, what to tell your kids, and how to navigate each day is a huge challenge for most all of us. But tradition and family provide some means of constancy that helps anchor us when everything else is whirling about us tempestuously.

And that is part of the magic of a place like Edaville, a family tradition. Certainly, the lights and music and chugging of the steam train is wonderfully overwhelming.

But seeing it again, after a whole year of war in the Ukraine, of political upheaval, of inflation and talks of recession – after all that – seeing the that huge Seasons Greetings marquee once again immediately calms the wild sea into still waters and, at least for a moment, all is right with the world. I hope your traditions remain alive and intact for you dear reader, and that they bring you peace, comfort, and joy in this holiday season.