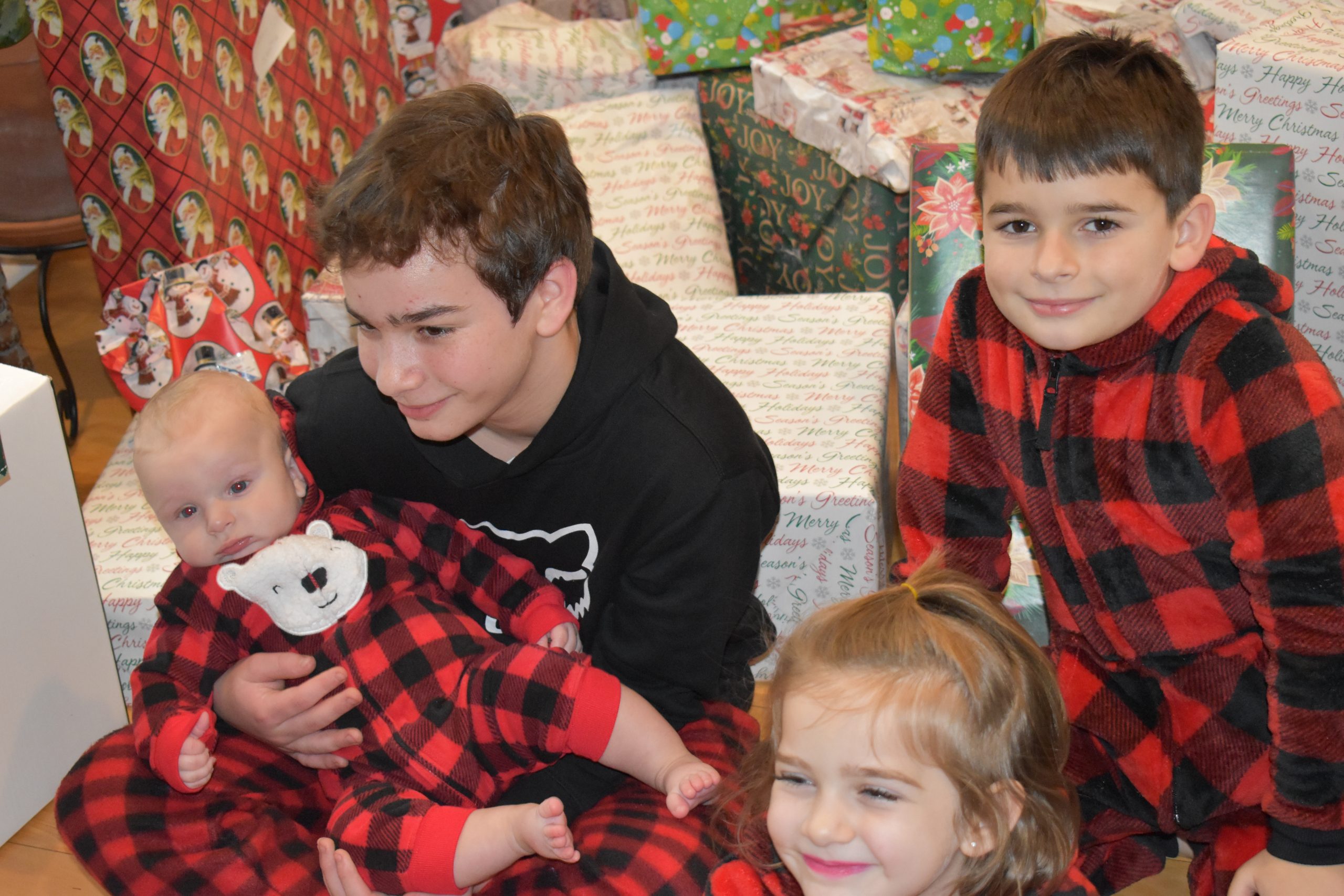 And just like that, Christmas future has become Christmas past. Not truly literally, but figuratively in the blink of an eye. All the preparation, the anticipation, and the waiting… and it’s over. I spent hours agonizing over every gift, even every label. Yes, labels! We are a bit eccentric (or perhaps not seeing as I’ve never asked anyone else about how they label gifts). For us, the To and From will vary wildly as in To: Monkey From: Nando, that being from me to my wife. Nicknames, sweet terms some of which go back 30 years and even more. Or perhaps To: Talen From: The Birds, or From: The Deer, implying of course, that the birds or deer thought enough of them to buy them a present!

Some of it is tradition and some is just fun play. But I think about each label and try to be creative and fun with each. Also which presents are from Santa and which are not? As you all know, Santa doesn’t like to take credit for his gifts and quite often he doesn’t label his gifts and leaves it for me to do! Of course he biggest and best are usually from Santa so it isn’t difficult!

The funny thing is that the most anyone usually reads is the To: name and once they see it is or is not for them, they open or hand it off, with little or no notice of the From: name. Especially the kids! I bet if I asked any of my grandkids what the birds or the deer gave them, they’d look at me like I was nuts!

Another tradition is the underwear ornament. Yes – you read that right. I have a ornament that is hollow and separates into two halves, allowing you to put something inside it. When I first folded into my wife’s family, her father and I went Christmas shopping for my first Christmas there with them. All was fine until we headed into the lingerie section where he began going through women’s panties. I was… aghast, confused, and bewildered… I guess. As it turned out, he would place a pair of underwear into an ornament for his wife every year. So I began doing it – over 40 years ago. And every year I would go to the store and forage through the women’s underwear in search of just the right ones. Of late, I have been ordering online; not sure the sight of an old man pawing through panties is something anyone wants to see!

All this aside, it was a truly wonderful Christmas. Both my kids and their spouses and all my grandkids came over midday to exchange presents and enjoy each other’s company. Totally chaotic at times with screams of joy and followed by precious moments of tears of joy. It was the first Christmas for my daughter’s boy and my dear daughter in law bought all her kids Christmas PJ’s (as is her tradition) bought a matching pair for her new nephew, so we got all four in a priceless photo. Magic – pure Christmas magic.

That was Saturday; by Sunday afternoon the tree was de-trimmed and gone. Another tradition, although not one I am fond of. Usually it is driven by the rapidly falling needles. But this year the tree was holding onto its needles pretty nicely, so that was not a factor. But taking it down the day after is just what we do and this year was no different, although I have to admit I lingered and stalled before finally doing it. And I immediately missed it when it was gone. I still do.

I’ve been having a hard time lately, emotionally. Normally not a thing for me, but yet there it is. Frustration, short-tempered, and general irritation or annoyance – especially driving. But even in my own home, I get frustrated with myself over the littlest things. My poor vision, my poor hearing, my dwindling strength and stamina, my aches, and a thousand other similar things. I have no patience for my aging self.

I’ve also lost a lot of friends over this past year – a lot. A lot my age or older but a fair amount were younger than me too. Loss is never easy, but it seems that lately loss has been coming more frequently and suddenly. It’s one thing when you hear Joe or Jack has cancer or something, and then you hear they died months later, but quite another to see a post on FaceBook from a friend one day, and then a post from his wife two days later announcing his sudden loss. And there have been far too any of those lately. Of course, this train is one-way and the only stops are to let people on or off. And as you age, far more people get off than on. And none of know when our stop is approaching.

All in all, I guess I really have to just face the fact that what I am feeling is natural and normal; no one likes to get old, no one likes to age, no one likes lose strength or stamina, and no one likes to lose friends. So of course I am put off by it! In truth, I often forget that I am nearly 66 years old; I often feel more like 45 or so. (But that is without catching sight of myself in the mirror!) The vision and hearing are always debilitating but both have been declining since my 40’s anyway, so by now those losses are all too familiar to me now and as such, really don’t often cause me to take pause for thought.

I suppose that we all tend to bundle our time by year and what better time to take a moment to assess and reflect than the final week of the year? And when counting the people who have left the train for their final stops over the last year, it can’t help but overwhelm you. I had several that took me but complete surprise including Robb Smith who died at work while simply performing his job.

Just talking about all this has led me to better understand my mood of late. Add in a renewed set of curtailed activities thanks to a pandemic now entering year three and it all makes sense to me. But knowing is only part of the battle, one still needs to correct one’s behavior to compensate accordingly. And that is often the hardest part of times like these. But life is challenging and moods such as I’ve been in are all a part of it. Not the first time and certainly won’t be the last (unless of course, my final stop on this train is imminent)!

And not to digress from reality to abstract mid-post, but I often wonder about the vibrations we all routinely face in life. I’ve written of them often, although not too much lately as you hate to beat a dead horse (isn’t that a distasteful expression???). But in a nutshell, life is all about energy: our thoughts, feelings, and emotions – our passions and intensities.

I often refer to it to the music of the soul; songs which we all hear some of but no one hears all of. It, to me, explains why sometimes we dislike a person before we ever speak to them; it explains intuition, gut feelings, and spidey-sense. We all exude unconsciously emit energy non-stop: music – vibrations. The portion of various vibration frequencies that are audible to humans is severely limited; there are far more frequencies beyond our range of hearing than not. So don’t try to cup your ear and listen harder! But that doesn’t mean that they aren’t there.

Some people’s vibrations are naturally in tune with ours and we become true and fast friends while others are discordant to ours and we end up not getting along with each other. Think of it as harmonizing, like some of the great musicians through the years such as Simon and Garfunkel, or Peter, Paul, and Mary, or Abba, and countless others. Their different tones and blend together into heavenly harmonies. Much the same with souls – people whose thoughts and feelings blend beautifully with our own often become lifelong friends. Vibrations of the soul – the music of life! And we tend to surround ourselves with tones that blend and enhance our own; with people with whom we share common ideas, beliefs, and ideas.

And when we lose people from our life, their vibrations remain because the law of conservation of energy is very clear that you can neither create or destroy energy. So when we die, the thoughts and emotions and feelings we have sent out through our life remain and don’t die with us. They are part of this plane of existence forever. But the source is gone – the origin of them – and that leaves a void. You remember them, you still feel them, you still embrace their thoughts and feelings because their vibrations remain. But they are different somehow, transformed from feelings and emotions to memories; from present to past. I suspect my soul is processing all the music that went from active thoughts from friends to memories of them. And in truth, that is not a bad thing.

Today is 12/28 and a new year is poised to launch in three days. Of course I am not foolish or naïve enough to actually believe or even consider that the transition from one day to the next ushers in all sorts of changes and differences in life. What is true on 12/31 is still true on 01/01 (except for the date). The pandemic does not evaporate overnight, the economy does not catch fire overnight, and gas prices do not tumble overnight. Bookmarking the New Year as a change from the previous day is not realistic. But we can hope that much like the crack of dawn after a dark and stormy night, that the light of day will bring some respite, some hope.

I hope your Christmas, or whichever holiday you embrace this time of year, was peaceful and fulfilling and joyous. Stay well dear reader!!