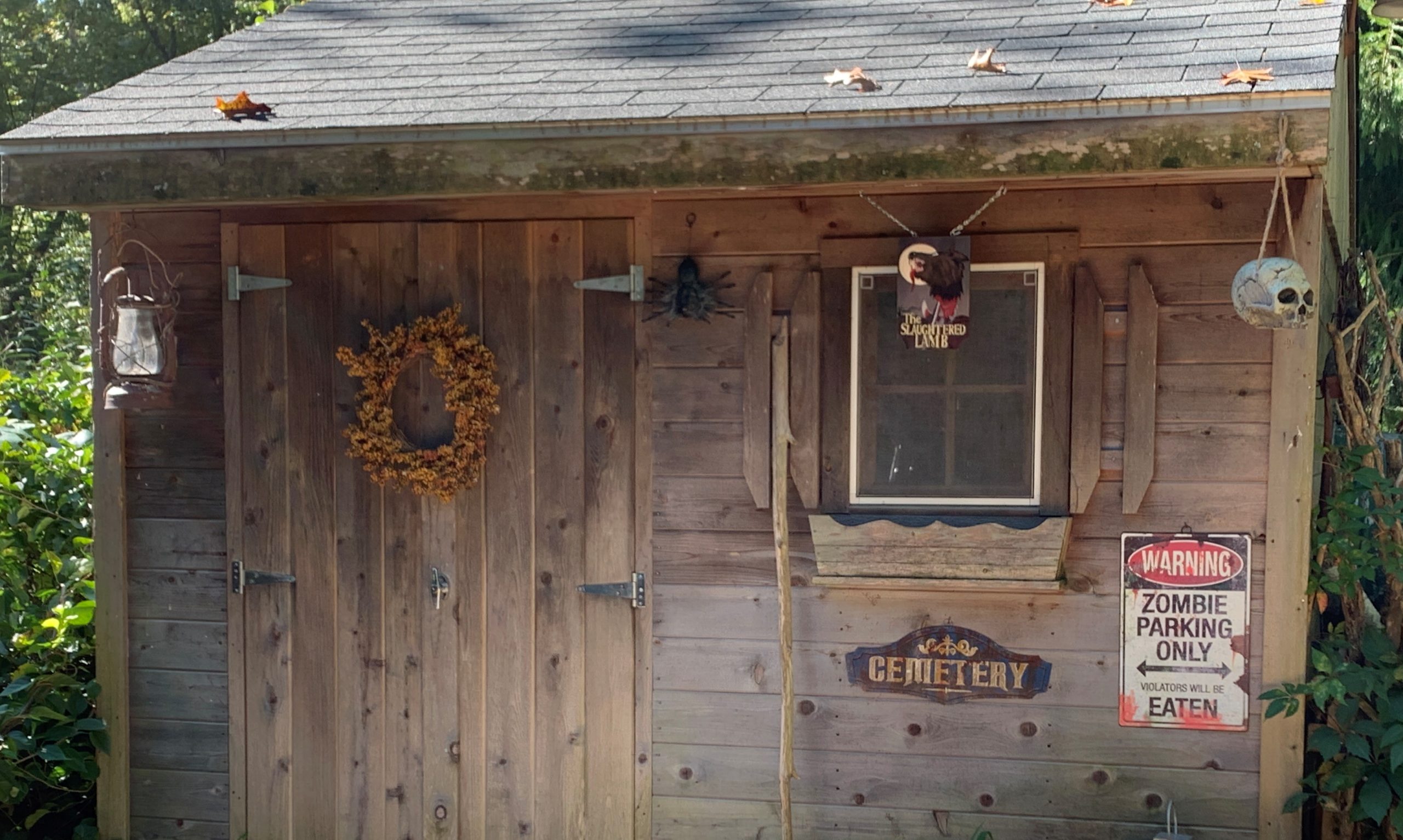 Long time, once again! I feared this might happen – there has not been a lot going on here and I have been wrapped up with outdoor projects such as cutting/splitting wood, installing a firepit, and trying to get ready for our annual Halloween party (taking place this coming Saturday). And on top of all that, we went up to Maine for the weekend to visit my wife’s sister and family, and attend their annual Halloween party. All that left me with precious little time to write. Even now, I have so many details to work out and get ready for the party Saturday that I really should be outside working or shopping and not parked here typing. Yet here I am!!

So let’s see here…the firewood. I had just about run out of wood to split. The last tree I dropped is all cut and split except for four or five stubborn pieces I’ve yet to split. I really had zero interest in taking down another tree now, right before the party (and perhaps at all for the foreseeable future). So I found a guy selling log length wood – essentially six to ten-foot sections of trunks and branches.

He dropped it in my driveway completely clogging up most of the upper half of the driveway so with the party coming up, it was almost my fulltime effort to get it all cut into 18” lengths and then moved down to the back of the yard for splitting.

So for days I cut and cut and cut – sawdust and wood chips everywhere and a huge pile of big heavy pieces that needed to be moved. I cut about half of it and then spent a day or two loading each piece into my wheelbarrow and taking the journey back to my splitting area. Using my FitBit, I counted the steps from the driveway to the splitting area and back, then used stride length to determine distance. It turned out to be just under a quarter-mile round trip, with at least three or four hundred pounds in each load. I ended up with something like nine-miles of travel to get it all moved! Back breaking work….

Now I have a huge mess in my splitting area so I have begun splitting and then moving the split wood back up to my storage areas. Now some of you may be asking why I don’t just split where I stack and store it, but if you don’t know, splitting wood makes one helluva’ mess!

Just too much mess and ground destruction to do up in the upper yard by the house. So I’ll be moving the wood once again – and then again (in smaller quantities) as I move it into the house for burning. All I can say is that it is good, hard, honest work and that I enjoy pretty much all of it. But quite time consuming!

The firepit was my anniversary gift to my wife. Our anniversary was the first weekend of October and like last year – and unlike all previous years for decades – we did not go away to celebrate. We stayed home and went out to our favorite Chinese place to celebrate and it was wonderful. Since we’ve been spending so much time in the yard, and she has never been quite happy with the smallish metal fire pit we’ve been using, I got here a nice big one made of formed cast concrete to look exactly like cobblestones, which is then colored for the look you like: gray or brown or whatever. It includes cap “stones” and an internal metal ring to protect the pit itself. It did not take long to put together and we’ve already used it twice. I placed into a larger area than I had the smaller one and that opened it up nicely. A great addition to the yard!

I won’t get too much into Halloween in this post; I put up a few things in the woods pretty much every day, slowly getting it ready, and my wife has been doing the same indoors. I can’t/won’t put out any of the powered units yet, just in case of rain between now and the party; I also like to hold back a few things to surprise the grandkids the day of the party. But I have a lot to do still just decorating, never mind getting all the food and drinks and pumpkins (I think at last count I need more than 20) to be ready for Saturday. And then, somewhere around Wednesday we begin the fingernail biting as we watch the weather forecast praying we get no rain. Once you buy all the food, you really can’t just decide to move the party to the next weekend due to rain – you are stuck with what you get! It’ll be fine – it always is.

Now the trip to Maine; the party was great fun and the kids (now in their late 30’s / 40’s) had a great time, as did the grandkids. There was a candy hunt, pumpkin carving, a hayride, and great food – a really wonderful time. The drive up is right around five hours, sometimes longer depending upon traffic. We were on track for a five hour journey until we began to see brake lights up ahead on RT95 north, which quickly brought us to a complete dead stop. And after five minutes of that, I realized that I had not seen a single car pass by on the other side – the four southbound lanes were completely empty and quiet, apparently stopped up ahead of whatever it was that interrupted our drive.

We ended up sitting there for just about one full hour – yes, a full hour.

I got on my phone and determined that there had been a severe crash just a little distance up ahead and that they had to shut down the entire highway to land a helicopter to life-flight the victim(s) to a hospital. Eventually we saw the helicopter take off and shortly after it did, southbound traffic began to flow. However, we did not; we stayed there at least another 15 or 20 minutes until we finally began to creep forward. Our four lanes were force-merged into a single lane so it was a slow crawl to get past the scene where there were literally dozens of fire, rescue, DOT, and police personnel. We never did see the car – only where it had entered the tree line on the right side of the road and the debris scattered everywhere. It had gone so far and so deeply into the trees that it was invisible to us; clearly a reflection of the speed it had been traveling at.

It has been a while since I have driven any great distance on a major highway – over a year. And what I quickly found was that 80MPH is the new 70MPH. The Massachusetts speed limit is 65 away from the cities. So the rule of thumb is usually 5-10MPH above the posted limit – used to be. At 80MPH I was barely keeping up with the flow of traffic and that was in the right-hand lanes; I estimate 90+ in the high-speed lane! People are just driving faster, which is fine as long as people drive carefully and correctly. But all bets are off once people begin capriciously switching lanes to “better” their road position and drive a little faster.

I have no idea if this is what really happened with this accident, but I simply cannot envision a driver suddenly yanking the steering wheel hard right and taking a 90-degree departure into the trees on the side of the road. Just doesn’t happen. What does happen is that people suddenly change lanes and cut off other drivers; and sometimes they misjudge the opening and clip the front of the car that they are cutting off with their rear bumper. And when that happens, the struck vehicle often gets ricocheted off the road like an errant pinball while the car that caused it just keeps motoring on down the road. Again – I don’t know that’s what happened here – in this case the car that left the road could have been the offending vehicle, essentially doing it to himself.

My daughter and her husband were some distance behind us so I texted them to be aware and possibly find an alternate route. As it turned out, they were still in the motel and by the time they were ready to leave, traffic was moving once again. He later told me that when they passed the scene (still only a single lane all that time later) the car was being pulled up onto a flatbed. He said it looked like it had been filleted – roof peeled off, doors gone, window pillars gone, all evidence of the long- and difficult-time rescue personnel had extracting the driver (not sure if there were passengers). And for a what? Another few miles per hour? So not worth it.

But all this talk is for a reason. Once I got home last night, I began to think about all the evidence in front of me; where we were in relation to the accident and the speed at which we were traveling. And it occurred to me that we had to have ben scant seconds from being right in the middle of it. We were stopped less than a quarter mile from the accident. At 60MPH a quarter mile represents 15 seconds of travel. At 80MPH a quarter mile is around 11 seconds. So we were a mere 11 seconds behind that crash; perhaps less because I like to be conservative and I think we were actually less than a quarter mile from it. Sobering thought….

The randomness of fate; a driver cuts me off and I take my foot off the gas for a second or two, I move into a different lane and get stuck behind a slower car for a few seconds before I can pull out to pass it. Those seemingly insignificant tiny delays were all just enough to keep me out of that accident. The vagaries of chance – it’ll boggle your mind the more you think about it!

Enough for now – I still have a looooong list of things I need to get done so I need to stop now. Enjoy this upcoming week of real autumn weather (at least around here)! Stay well dear reader!!