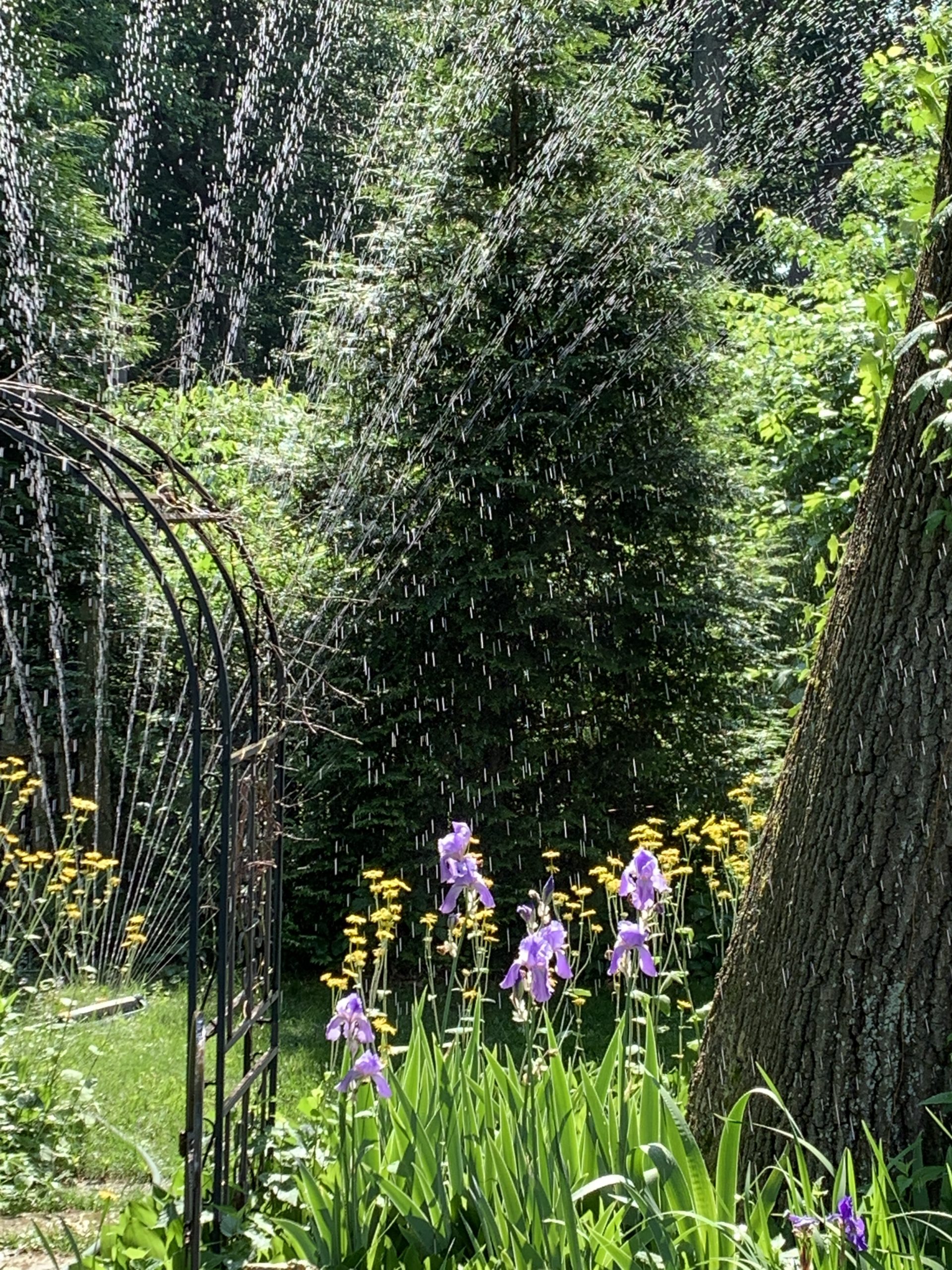 ….it is summer! You can tell by the oppressive heat and me not updating this blog for two weeks – sorry. It has been a busy two weeks, I’ve not been hiking since my last post, rather getting ready for my daughter’s baby shower and a thousand other odds and ends that needed doing. Don’t get me wrong – busy is good – it is productive and useful and functional, something we all need to achieve whenever we can.

In addition to the baby shower and the myriad of things needed to pull that off, there was the garden, appliance issues (first the washer which I replaced) and now the dryer (which I am continuing to try to repair), dropping a 60’ dead oak tree, and… oh yes, Father’s Day! Father’s Day was wonderful: both my kids, and their partners, and my grandkids, all came over for an afternoon cookout. Burgers, hot dogs, potato salad, corn on the cob, and watermelon – just wonderful.

The oak tree… it has been standing as dead wood for over two years now, one of the fifteen or more victims of the gypsy moths I have written of so often. Those trees that posed a real and immediate threat to the house or power lines were removed quickly after they died, either by me or by professionals. Those that didn’t pose a threat were left standing and I’ve been taking them down over time: one here and one there. And as I recently wrote, I have sort of reached an impasse; there are trees that I could take down safely, but would cause extensive damage to the growth in the yard: bushes, shrubs, and other living trees.

On top of that, as I have also mentioned in the past, I crave privacy and trees are screening – dead or alive. A two or three-foot diameter tree trunk provides screening and I’ve been unwilling to remove them. But this tree – this particular tree, afforded no privacy or screening. Behind it and around it is nothing but greenery and no neighbors, so no need to keep it standing. The reason I had left it for so long was collateral damage: my fence is on one side, the vegetable garden is on another, and there are countless sweet-pepper bushes and blueberry bushes all around it that do provide screening, as well as a half dozen young trees around it. Frankly, there was one solitary place for it to come down without causing damage – a narrow 4 or 5-foot lane safe strip.

But… one must never forget the gravity rules, that the tree wants to go where the earth most affects its mass. And in this case, the tree really didn’t look like it was willing to fall where I wanted. Often, it is relatively easy to know which way a tree will fall, generally anyways. But if you don’t have good open access 360-degrees around it to truly understand its lean, it can be difficult to really be sure which way it wants to go. And that, in a nutshell, is what took me so long to decide to tackle it.

Everyday I would walk past this tree over a dozen times, and I would always stop and take yet another look at it, trying to think it through. One thing was clear – there was a smaller tree, a 12” diameter maple, that curved across this tree’s fall path and left alone, the maple would prevent the oak from going where I wanted and instead, would slide it over to the southeast and right onto my fence. So that tree had to come down before the big one. While not at all a difficult drop, I hated to take down a living tree. And beyond that, there was a smaller maple branch from another tree that really needed to go away as well.

So I dropped the maple and cleared the branch, then cleaned up all that mess. It did afford me a better look at my guess of the fall line for the oak and made me slightly more comfortable that I had a good shot at convincing it to go where I wanted. And then I started cutting. It was around 20” inch diameter, a little greater than my 18” chainsaw bar, so it needed to be a multi-sided attack. I made my V-notch cut and then began coming in on the hinge side. And at about 50-60% through, it became abundantly clear to me that this tree wanted to go southeast, onto my fence. Not only would that ruin my fence, but cleaning and clearing the tree would be a nightmare, including some spillover into the neighbor’s yard.

As I cut along that side of the tree, I could see, and feel, the weight shifting in that direction, actually beginning to pinch the bar. What you want to see is the kerf – the cut gap – begin to open as gravity takes over and the tree begins to slowly lean away towards the notch; not the case here. I grabbed a steel wedge from the shed and began driving it into the kerf hoping to shift the center of gravity back where I needed it, but it was just not enough.

I stopped cutting and ran back to the shed for more supplies. I threw a line up and over a high branch and used that line to pull a strong rope up and over, and then around the tree, giving me a sort of lasso around it up high. I then rigged a come-along to another tree in the yard and began ratcheting the tree back over to where I wanted it. I used one full pull of the cable (approx. 4-5’), reset the tie-point, and got about halfway through the second pull of the cable when I heard the distinctive sound of a very large tree cracking and breaking. One more pull on the handle and the cracking grew louder and prolonged and gravity took over as the big old dead oak began its descent to the ground – exactly where I had hoped and prayed it would go. Success!!

I had known that the top limbs of the tree were going to be punky and essentially useless as firewood and once the dust cleared, that thought was proven correct; nothing of value there. But the thicker limbs were still mostly solid, as was the trunk. The outer inch or two of the trunk had become punky but the rest was still good strong and solid hardwood. I cut the good wood into 16-18” sections and threw the punky upper limbs into the debris pile. Next up – splitting and stacking. I am guessing about ¾ of a cord should come out of this dead oak, and maybe a quarter cord from the maple I had to cut. All good!!

The garden continues to grow with great vigor, much of the corn is a foot high now, the squash, beans, peas, and cucumbers all have either flowers or first fruit showing, and the carrots are approaching the point where I need to thin them out. The next month will be crucial in determining our final veggie outcome. Each year gets me hooked a little bit more deeply!

The next week or two will be interesting around here, my daughter is in the final week or two of her pregnancy and will be giving birth possibly any day now. Yes – another Wolff-cub is poised to join the pack. That addition will bring some chaos and shake-up everyone’s world (in a great way) once he arrives! Very excited to meet him….

Life always has a rhythm, an ebb and flow, a balance; however, the cadence is not necessarily always truly rhythmic – in tempo. Rather, there can be periods of regular ups and downs and then there can be long periods of one or the other without ebb and without flow. Within the depth of every bitter January night, zero-degrees and biting winds, lays the seed of a sparkling eighty-degree July day with gentle gossamer breezes touching our faces.

Standing back and looking from afar – from ten thousand feet as they say – you may be able to see that even the long periods without either ebb or flow are eventually balanced by periods of the opposite; it’s just that when we are in them we can’t see above the tops of the waves long enough to see the calm waters coming.

The trick is to never get too comfortable in either – we must know that shelter and respite are coming even while soaked wet to the skin and cold to the bone deep in the storm. And likewise, while feeling the warm sun on your back while watching the birds fly across the blue skies and marveling at the hummingbirds feasting on the nectar of the flowers, that even though we can’t see the storm clouds on the horizon, that they will come. It is inevitable, inescapable, and absolutely necessary.

We’ve been going out to eat, inside restaurants, for a couple of weeks now; I even got to finally go out for breakfast, a huge favorite of mine! Not only that, we were set and booked to spend a few days in Salem – our first getaway in almost two years. However, my daughter began having contractions several days beforehand, so we switched from Salem, which is over a two-hour drive from home, to the Cape, which is right around an hour drive. But then her contractions became more insistent and, even though we have no part in her giving birth, we just felt more comfortable not going away “just in case”. No big deal – we’ll go another time – more important things to tend to right now! Stay well dear reader!!