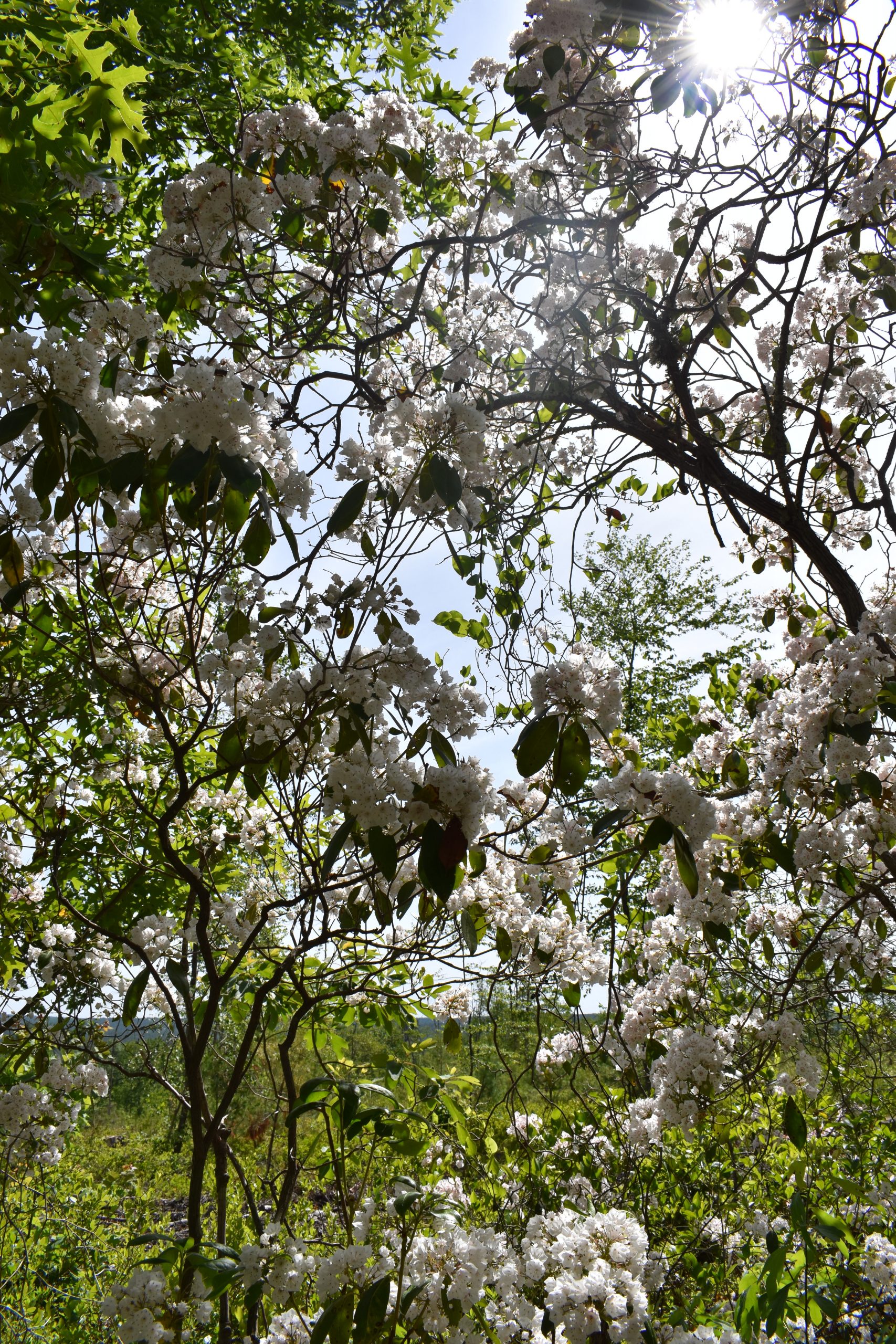 I got out for an 11-mile hike yesterday – it was amazing!! Don’t get me wrong, hiking in the woods on any day is always an incredible gift, but the mountain laurel is in bloom right now and adds a layer of beauty that is simply over the top. The color of the forest is normally muted: a seemingly endless palette of greens along with greys and browns. It is, fittingly, a hushed color spectrum. But when the mountain laurels explode deep in the woods, it is completely unexpected; the sudden brilliance of the whites and soft pinks startle, surprise, and seduce the senses.

I do so treasure my time on the trail, this despite the incessant complaining of my right foot thanks to the never-ending discomfort of my plantar fasciitis. It intermittently transitions from marginally noticeable to startlingly sharp shooting pains. It diminishes my ability to fully immerse myself into the hike and often leaves me walking my final mile or two with a decided limp. But… it does not diminish my joy of being out there. At least I can walk, even if it is with a limp. But I do look forward to the day when this has passed and I only need to deal with the “normal” aches of a 65-year-old body on a hike!

During the walk, I found myself contemplative, as I usually do. But yesterday I had my headphones on, listening to music. And we all know how evocative music can be. And as I rambled on, I found myself recalling my dad’s death. He died in June so it was not an unfitting time of year to go back to his final days. To be clear, he passed at the end of June – June 29 – but the passing began long before that date.

I’ve written of the ordeal, the saga, before and will not repeat it here. I will though, spend a moment or two reflecting on the final day, several hours before he left this earth. It was a Sunday; I was numb, dead inside, exhausted, and really operating on basic instinct and shear will, along with God’s graces. Dad’s sister-in-law, his roommate for the last several years, had not been to the hospital since his admission. She had taken a nasty fall and had broken her hip. By this time, she was back home after surgery and rehab, but was still stuck in a wheelchair and getting out and about was difficult. But he was down to a mere few hours of life remaining by this Sunday. Of course the exact time is never known, but in this instance, was really pretty obvious. Were she to say goodbye, this was the day to do it.

Her daughter brought her. The hospital only allowed two visitors at a time in the room, so when they arrived, we left. Frankly, I would have left anyway in order to afford her some privacy. She silently rolled past me in the lobby towards the elevator and my cousin merely glanced at me with a sad hello. Once the elevator doors closed, we headed outside. We’d had been in that room every minute of the day, except when we went back to the hotel to sleep and desperately wanted a respite; this was it.

The hospital was in the middle of Atlantic City, only a few hundred feet from the fabled boardwalk, so we headed there. It was late June – the 29th – and the summer crowd was in full swing. The boardwalk is big, startlingly big if you’ve never seen it. But in the summer, finding clear walking space is difficult, there are really that many people on it. It is not oppressively crowded, not panic inducing or anything, but suffice it to say that it is well used. There are stands and kiosks everywhere selling sunglasses, touristy mementos, tee shirts, and every sort of incredibly delicious food you imagine. Your senses are overwhelmed with the sounds, sights, and smells – it is truly quite extraordinary.

On this day though, it was nearly debilitating. Given the depth of the abject sorrow I was experiencing and the magnitude of the stress watching him slowly fade away, the juxtaposition of the joy and exuberance of the boardwalk hit me in the face like a hammer. There were screams, laughter, and squeals of joy assaulting me from every conceivable angle; it was absolutely overwhelming. And of course, the source of the noise was thousands upon thousands of people steeped in unbridled joy and that, was repugnant to me in my darkened mood. I will never, ever forget, that moment and the vicious contrast of their joy and my sorrow.

I sat on a bench as close to out of the way as I could and had a cigarette, head down the whole time. My head was pounding and my heart was aching and my time was up – it was time to go back to the death watch. As before, we waited in the lobby until my cousin rolled my aunt off the elevator, her head stiff and erect, her reddened eyes locked straight and forward, not blinking once. We headed back up to his room and within a few mere hours later, dad left us.

Walking the forest, listening to my music and remembering his death, seemed appropriate somehow on this warm day. The forests are still reeling from the extreme damage they suffered by the gypsy moths several years ago. The damage is so severe that for the last two years the State has had to perform timber harvesting throughout great swarths of the state parks. Despite that, there are thousands of dead trees still remaining, skeletal remains of a happier time. Those little caterpillars have caused a monumental change in the environment of the woods.

The canopy of the forest is thick, dense, and unrelenting; what grows beneath it only does so because it is uniquely capable of living in those specific conditions. When a tree dies or falls, there is a brief period of time where the forest floor receives direct sunlight, but that moment is short-lived as the other trees reach out for the newly opened space and quickly fill it. But that is about all the sun that the flora under the canopy, all that is barring something catastrophic such as the gypsy moth deforestation. There are holes that span acres now.

The entire forest floor has been turned upside down; plants that relied on the darkness with only rare glimpses of filtered sunlight have been bombarded with pure unwavering sunlight all day long and have since died out, unable to cope with the sudden and constant sunlight. But in their place, a whole new ecosystem of flora has arisen; plants that thrive in direct sunlight. Grasses, flowers, and shrubs of all sorts are now dominating portions of the forest that have been covered and dark for hundreds of years. It is glorious to see that rebirth of life in the midst of the bony remnants of the oaks that had formerly ruled the woods.  And then I think of my dad, and of my family, and of how now there is my children and my grandchildren and how his life led to all these lives. Sometimes the woods are for more than hiking! Stay well dear reader!!