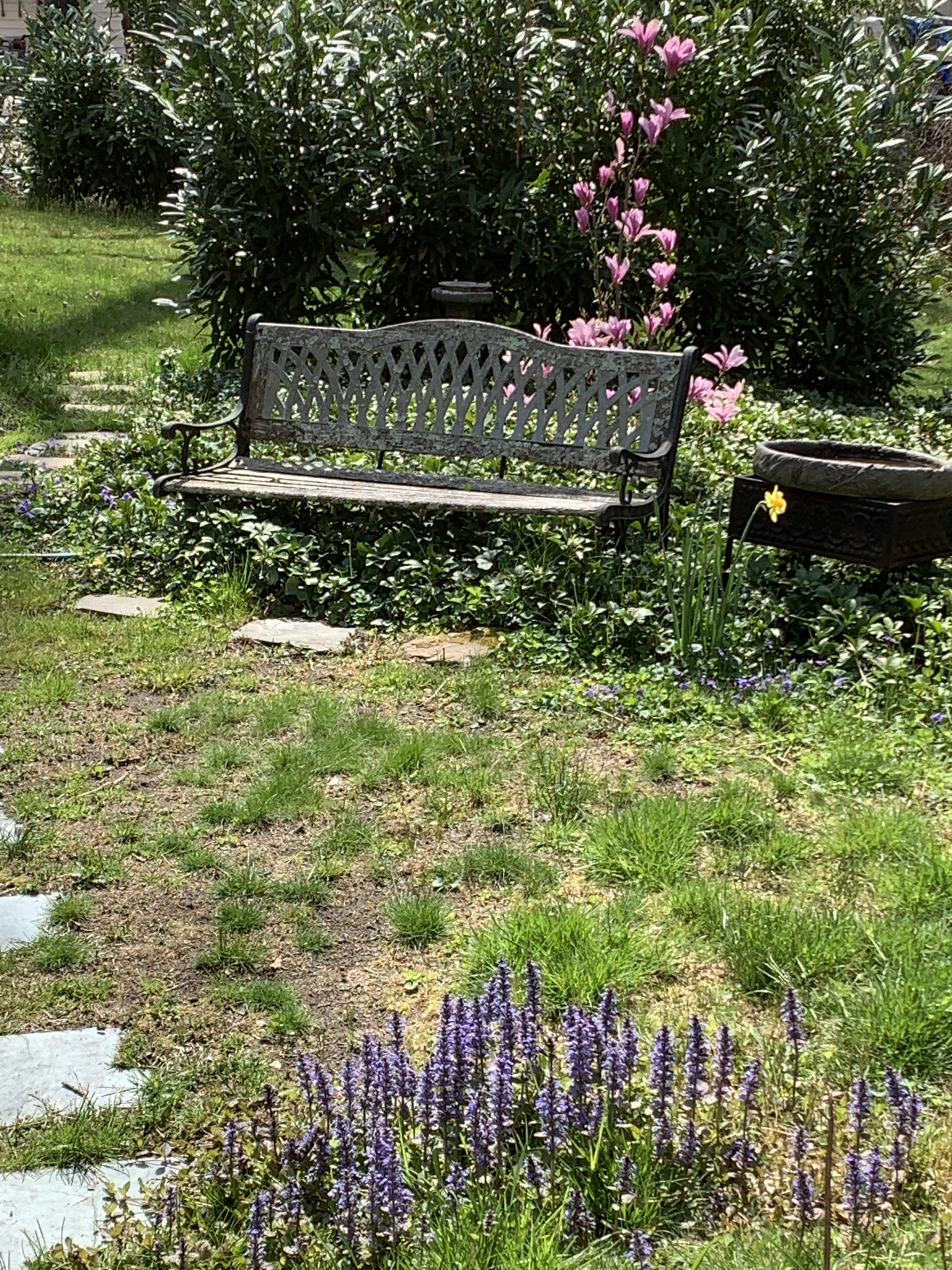 Another prolonged lapse in updating this blog. Although I’ve never really checked, I suspect this is a common trend for me in the warmer months as I spend far more time outside. And that was the case this week. In fact, Wednesday I logged just under 13 miles and never left my yard! I was, as Voltaire urged us, tending to my garden.

Untouched since the close of the season last October, much work is needed to prepare a garden for a new growing season. The fall leaves need to raked and removed, then the weeds and other new growth needs to be removed. I wanted to enhance the soil this year by adding some nutrients and lightening it a bit so I had I ordered three yards of compost. It arrived late Wednesday morning. I spent the first part of the morning rototilling the garden and then began the arduous task of shoveling the compost into the wheelbarrow and hauling it down through the woods to the garden. While I don’t have an exact measurement, I believe it is around 300’ from the driveway to the garden. Load it up, trudge back to the garden, dump it, spread it, and head back for another. I don’t know how many trips but at least four or five hours of out and back. And then once fully spread, rototill it into the soil.

Oh, I forgot, and in addition to the raking and carting compost and tilling the soil, harvesting rocks. It seems my garden grows rocks through the winter. I have pulled rocks out of the ground there since the day I cleared the briars and broke ground. And every year, including this one, when I prepare the garden there are more to be removed; at least a dozen this year, the largest weighing around XXX lbs. And they do not come out easily; they fight tooth and nail every inch of the way as you pry and lever them out of the hole. Once they are out and on flat ground, it is still a task to roll them out of the way, but far less strenuous than extracting them!

I’ve also been moving my woodpile – several times already. I had two areas set up on pallets and by early March I had completely emptied one pile and had gone through half of the other. So as the weather broke, I began splitting and restocking my depleted piles. But I had some pallets that had begun to either rot, break, or sink into the ground so I began to restore the pallets to a firm, flat, and stable condition. But that meant emptying a pallet of all its wood to get to the pallet to reset. I began on the already empty set of six pallets and got them all set. But the other pile, which I had been restocking as I spilt through the last month or two, needed more work than I had thought. There was just no way to leave any wood on any of the pallets and have them last through next winter, let alone adding more wood to them and having them last. Anyway, that resulted in my handling every piece of wood in my piles at least twice, some more. Crazy!!

After my exhausting day of moving tilling the garden, harvesting boulders, and moving all that compost I found myself sore in a lot of places: triceps, pecs, forearms, etc. And that made me recall and appreciate the effects of weight-bearing exercise so I have, timidly, begun using weights again. I’ve always been more lean and lithe than bulky and buff, and that won’t ever change. So I am not embarking on a “pump you up” journey! But the results of doing so are unmistakably beneficial: toning, strengthening, and fortifying the overall body. Like most everything else in life, exercise is a habit. In some cases, such as hiking, we reap the benefits almost secondarily to the activity; the peace and beauty of the hike is first and foremost and the exercise is just a side benefit. But most exercise, specifically undertaken for conditioning, is a conscious decision to do so for that purpose. And as such, and as it is difficult and strenuous, we have to nudge ourselves to go do it. And to sustain that, it needs to become a habit.

Obviously, exercise is always important, but I consider it critically more so in the later years. Age brings a surprisingly rapid decline to both the muscular and skeletal systems. Emerging from a long winter indoors as a forty-year-old is far different than doing so as a sixty-year-old. Stiffness, immobility, and atrophy are much more significantly pronounced with the advancement of age. And similarly, the amount of effort to counter those effects grow exponentially with age. Life… a journey of constant surprises.

But while I’ve gone on at length here about the body, the mind requires the same diligence in exercising it. Like the muscles that wither and weaken with less and less idle time as you age, so does the mind. We become set in our thoughts, ideas, and beliefs; rigid and inflexible. I’ve written of this in the past, but with the advance of age, mental exercise is as critically important to one’s well-being as is physical exercise. We must be as mentally flexible as physically; sort of mental yoga. The devil, as always, is in the details: how to actually do this?

I play puzzles – a lot – every day. Trivia, word jumbles, eye-hand action games, and whatever else I find. I try to play different things that make me use my brain in ways I commonly don’t. Puzzles are meant to be fun – that’s why we play them. But I like to experience at least some measure of discomfort at the same time; to feel some pressure, to stress while the clock is ticking, to sweat a little. Because that strains the brain and I personally feel that is good to avoid mental rigidity.

I also try to read things that make me emotionally uncomfortable every day. As I think you know dear reader, I am neither Democrat nor Republican: I vote the issue, the platform, the candidate. I lean conservative, but can just as easily tilt to the liberal on some issues. So I try to read news articles from the left as on CNN and from the right as on Fox. I will usually read some “true” facts on NPR or AP, then go read the slant of the left and the tilt of the right. I think doing this helps provide me perspective and balance. If I read about the things that each side are deeply emotional over, it helps provide me insight into their thoughts and beliefs and with that, comes understanding. probably not agreement but at least understanding. We never agree on a particular issue, but at least I understand their point of view – their perspective. And that is half the battle.

It is imperative that we fight mental rigidity as we age; otherwise, we’ll shut people out, miss out on so much, and frankly lead a pretty miserable life. The world will not stop changing, ideas will not stop emerging, and life will not conform to how we believe it should be. While we certainly have a choice to accept or deny new ideas and customs, at the very least we need to stop and examine them, consider them, and understand them first. Only then can we truly make an informed decision as whether or not they are agreeable to us.

Fear drives so much in us, often without knowing it. And new things, new ideas, new customs are all frightening to us: they threaten our belief system, our sense of morality, and essentially the foundation of our world as we know. So we shun the new and unknown as an intrusion into the comfort and familiarity of our world – often unnecessarily. In truth, we rarely give them a chance. And that, is mental rigidity. Changes in life: ideas, morals, principles, and behaviors are inevitable over time – it is how societies grow and evolve. But as long as we aware of this, we can at least try to steps to avoid it.

May is upon us and the explosion of life is everywhere. Enjoy the advent of spring dear reader – get outside and grab the warmth of the sun, the songs of the birds, and the fragrance of the flowers. Stay well!!