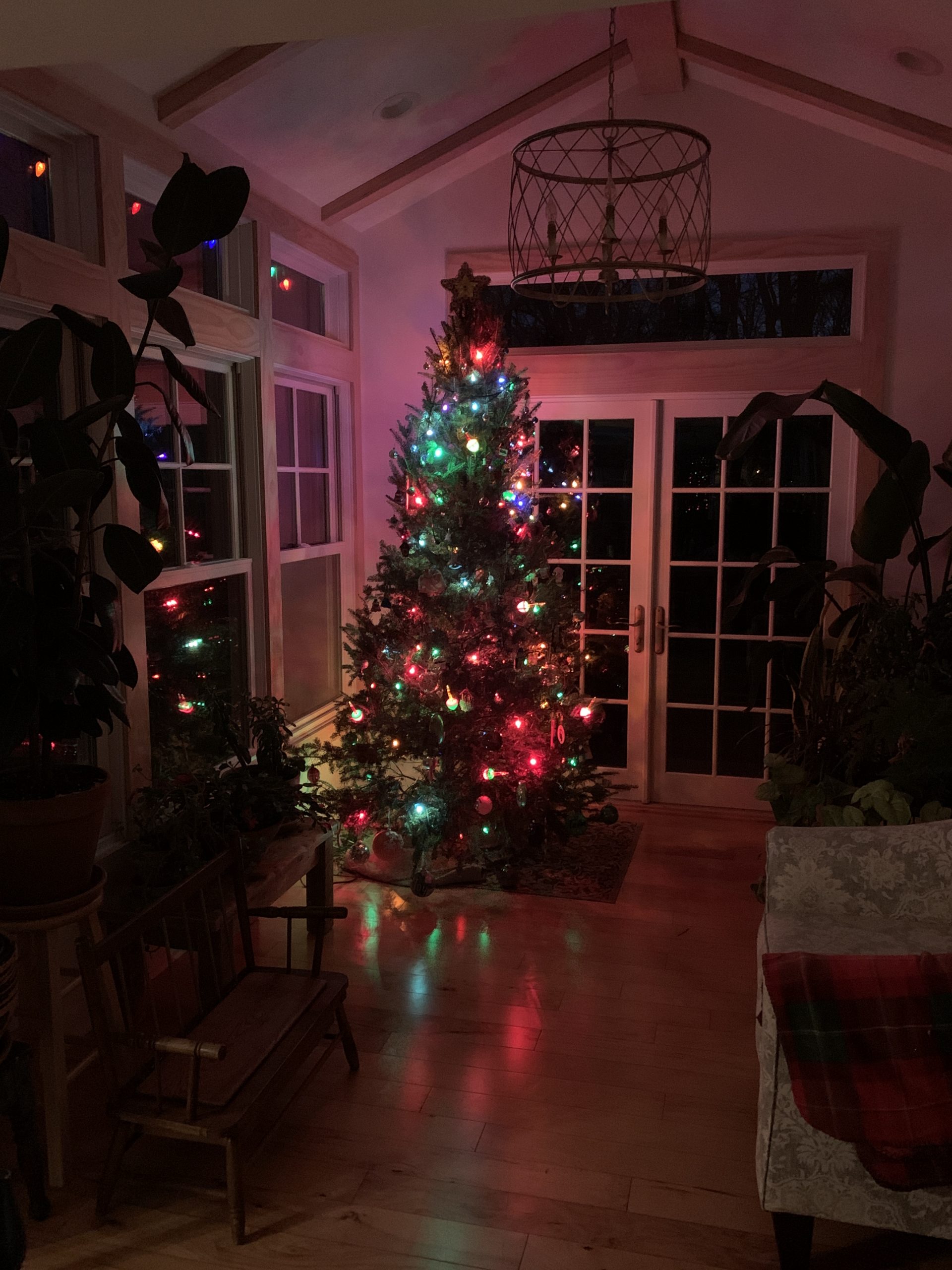 Sorry for disappearing for a few days dear reader; ‘tis the busy time of year and I became overtaken with Christmas preparations, along with other odds and ends. I’ve also been tackling the processing of a large tree recently felled, which I mentioned in my last post. It is producing a staggering amount of firewood, which of course, is great. But it has been keeping me busy splitting and stacking, and once I do get inside, there is online shopping to be done, decorating, boxes to retrieve from the attic, and….. well you get the idea!

We are deeply nestled into the Christmas season now: the tree is up and decorated, outside lights are burning nightly, and packages arrive from the various carriers daily from morning to night. We’ve had no real snow yet, but a fairly major storm is currently scheduled to bring a decent dumping of the white stuff in the middle of next week, so we’ll see!

Despite the drama and shamefully public angst of so many people, the election is fading to the rear view mirror and most people (although certainly not all) are accepting the results and moving on, Trump being the most glaring exception. But despite his rantings, the transition is under way and Biden will be officially be the president in about five weeks. And by that time, many citizens will have been inoculated against COVID and life will sluggishly shift back to the more mundane issues.

Speaking of the vaccine, there are dozens of polls out asking if people will take the shot once available. And much like the election, gun control, and mask wearing, people are firmly trenched on one side or the other with little middle ground and it seems to be about half and half right now (with admittedly no science backing these polls). There are many – myself included – who can’t wait for the chance to get the injection. But there are also many who have no interest in it; some out of fear of the side effects, some out of hatred for being told what to do, and some out of mistrust of the government, some of whom believe the vaccine is a genetic recoding of the populace. (I can’t help but insert an editorial chuckle here!)

But as I said, if I could find a way to move to the front of the line – more specifically move my wife to the front of the line – I would do most anything to do so. She remains terrified of the virus; not of herself but of someone in our family falling prey to it and dying. But some facts here: as of today over 16-million people in the US have tested positive, that is 4.8%. Less than five in a hundred have actually caught it. Of those one of five people who have caught it, only 1.8% have died, which is less than two in a hundred. The numbers are staggeringly huge – sixteen million positive and nearly three hundred thousand dead. But they pale with the denominator of 330-million.

It is not a swift and virulent disease ripping through the world, it is a slow and worrisome disease whose numbers cannot help but swell to epic proportions if left unchecked and allowed to sit and continue to infect. Which is exactly what is happening. Yes – the numbers are big, but not so much when you remember just how many people have NOT been touched by it: 95.8% of us. And we need to remember that the virus has been here for a year now… an entire year. We did a few weeks of a “sort of” lockdown, although not really as most people I know never skipped a day of work and most stores remained open. Let any illness sit and fester for an entire year and look at the numbers! Influenza-A can be frighteningly deadly: there were 80,000 deaths from it in the 2017-2018 season. And yes – 80,000 is less than 297,000. But the flu season is only three or four months; the virus has been here for a year now. That would extrapolate to the same, or even more deaths were the flu to stay for an entire year.

Of course, none of it is good, especially if you were among those unfortunate enough to lose a loved one from it. I do not mean to minimize it, or its impact; rather I seek to normalize it, to put it in perspective. The bible says “why do you look at the splinter in your brother’s eye, but not notice the beam in your own eye?” When you focus all your time and attention on one thing you can lose perspective and allow it to be magnified. Many are focusing on the daily case and death count so intently that they are forgetting it has been an entire year now. And that is why I want the vaccine as quickly as possible.

But that time is still off in the distance. For now, it is Christmas and a vastly different one for many. I’ve lost a great number of friends over the last four or five months and no, not to the virus but instead to those deadly afflictions we have come to accept as normal such as cancer, heart disease, and diabetes. But loss is loss and the cause or reason vanishes in the loss. They are not here with their families this Christmas and that sucks.

Yet despite the chaos and uncertainty, the peace and joy that Christmas always brings me is settling in and enveloping me. I’ve written often of how I feel about the seasons: summer is sultry, sensuous, and soulfully sexy – intoxicating. Fall brings Halloween and much like Spock in Amok Time, it becomes a Pon Farr that can make my blood boil with the adrenaline, passion, and frightfully fun fear of the possibilities of ghosts, vampires, and creatures of the dark. But Christmas? A feeling of peace and joy swaddles me and I melt into the purest state of contentment; one not felt at any other time of the year for me.

That feeling came yesterday, during the cookie making party. We normally have 20-30 people come over for this event – all family. My kids, their kids, my wife’s sisters and their kids and other relatives. We have food and drink, music, and lots of cookie dough. It can be so big that we have to run the cookie making in shifts: first the 1- to 5-year-old kids, then the older kids, then the “big kids” meaning our kids in their 30’s and 40’s. It is a big deal for all of us and great fun.

This year though, it was a total of five: my wife and I with our three grandkids. We were planning a larger group – not the 20 or 30 as usual because of the virus, but at least my immediate kids and spouses. But Friday a phone call from my daughter in law changed all that as she explained she was feeling very ill and was going off to be tested for possibly having the virus. Thankfully where she went offers the rapid test; she tested negative for the virus, negative for the flu, but positive for strep. Given that diagnosis we decided to cancel the cookie party for everyone, except the grandkids.

So we had an abundance of dough and food, and an absence of partakers of either. We made dozens of cookies and will be eating untouched leftovers for the next week! But what a wonderful time it was… different but wonderful. Laughter and music filled air, along with flour and sprinkles. And at one point as I was waiting for the next batch to finish in the oven I looked around and was overwhelmed with the feeling that I was the luckiest man alive.

The funny thing is, the intensity of the emotion that I felt is perpetuated solely from within me. There was nothing out of the extraordinary at that moment: Christmas music playing which can be played anything I so choose; making cookies which we often do through the year anyway; and just the grandkids and us here like most any other weekend. Aside from the Christmas tree, there was not much to distinguish this particular moment from any other on any other weekend. Yet there I was, all wrapped up in emotion; emotion clearly manifested by my own mind. Which tends to suggest that we are indeed masters of our own domain – when we allow ourselves to do so. We can take a moment and construct all the necessary thoughts and details from within our minds in order to make us feel one thing or another. This is not unlike how a song or a smell can trigger a feeling, a memory, and an emotion. Remarkable creatures we are….

I will leave you today with my wishes for pleasant and peaceful feelings for you this week. Stay well dear reader!