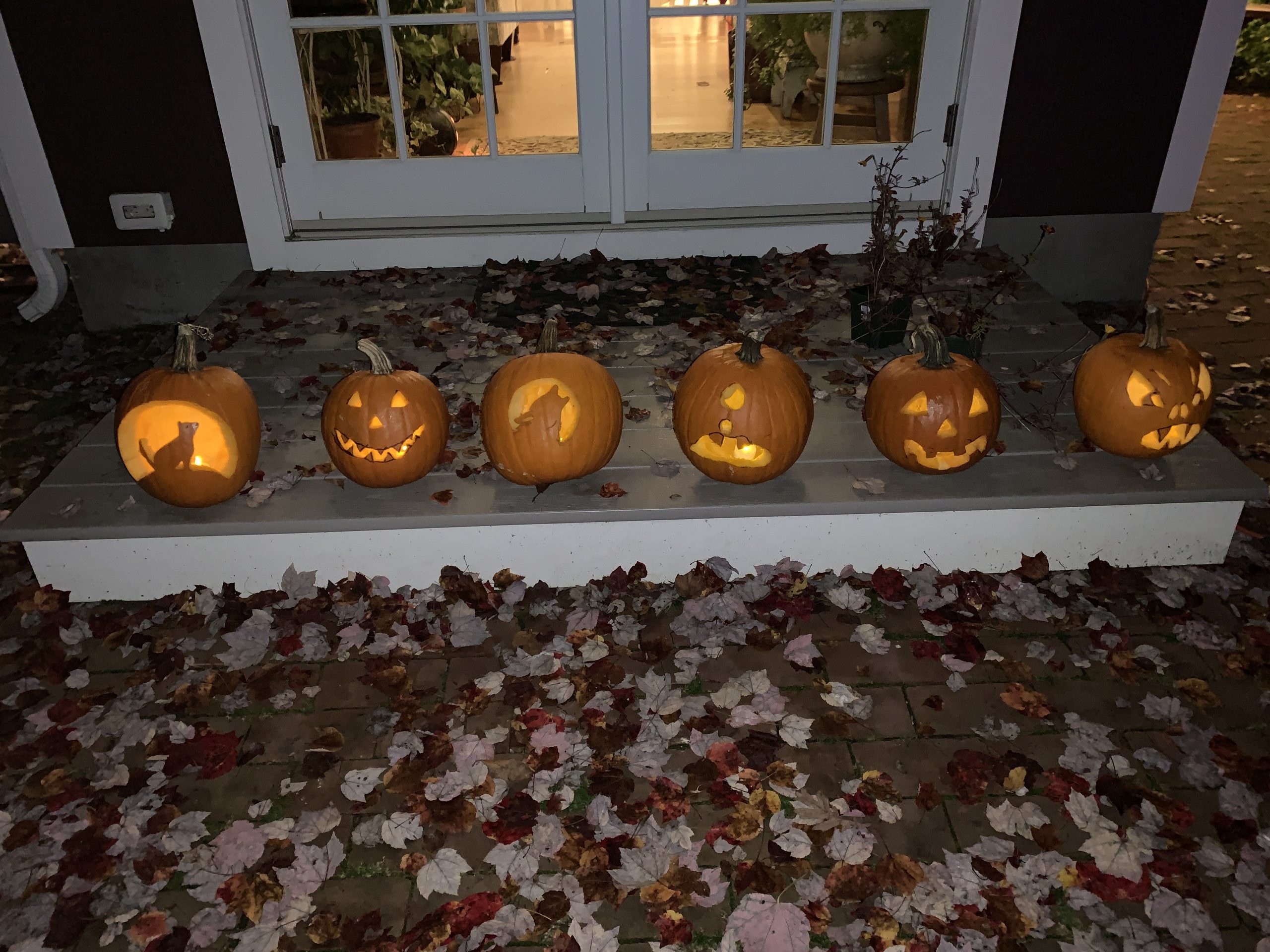 I am back, once again possessing a functional PC. The PC repair went fairly quick – kudos to Dell. I called it in on Monday morning, had the shipping box Tuesday morning and shipped it an hour later. They received it Wednesday and began diagnostics and repair, and I had it back by Friday morning. But…they wiped the hard drive and reinstalled Windows: claimed they found corrupt Windows files; maybe so. But I lost everything. Of course I do have online back-up, so lost is perhaps not the right word – missing is better. It took 5 days to get the drive with my files on it from my back-up service, including watching the package sit for an entire day in Memphis. None the less, I did receive it late yesterday and I have all my “stuff” back…once again.

Today is the day before Halloween and I am certain this post will not be done until tomorrow, so it will end up being my Halloween post. An odd Halloween for certain this year. People don’t know if they should go trick or treating or not, or if they should plan to hand out candy or not. My grandchildren are not going out to trick or treat, for the first time ever. They are staying at home and plan to hand out candy, assuming people come.

Our town is having a drive by decoration “spook out”. Register your house and they post it in the spooky map for people to drive by and see your display. We took the grandkids out this evening to look at some of the houses. Sadly, the map is really poor and navigating a house here and house there, in unfamiliar areas, is difficult. But we did see some nice Halloween displays, including one massive display that included at least 75 or 80 HUGE inflatable displays. They had to have spent several thousand dollars on all the pieces in the display (which included live streaming Halloween music on FM). Absolutely amazing!

What I did notice, on the drive around, was that 95% of the houses had nothing, and those that did, had very little: couple of pumpkins or some lights, that sort of thing. There are precious few people seemingly recognizing Halloween this year and I have to believe the stress and anxiety due to the virus and the pending election. People are seriously stressed out and it shows – it shows in their driving, their rude behavior in stores, and everywhere on social media. So I had some hope that people would mediate their stress by celebrating Halloween; sort of a catharsis. But I am not seeing that, at all. I see mostly a lack of interest in even noticing the holiday, never mind celebrating it. Sad, but fitting for 2020 I suppose.

I have some remaining hope that things will settle out a bit after the election, but that is the optimist in me. The realist in me knows that it may well be a real bumpy post-election period with whichever side loses denouncing the results and that candidate’s already stressed fanatical supporters going off the deep end and lashing out. Demonstrations, riots, violence, mayhem….the losers taking out their frustrations on the victors and the victors rubbing the losers’ noses in it.

And of course, the uninvited houseguest that just won’t leave – the virus. Cases up (as predicted by most medical experts in the summer), people panicking once again, and mayors and governors taking ineffective steps to try to demonstrate that they are doing something to help. To me, as I think I have indicated all along, there is little that can be done. Yes, we can wear masks and social distance – common sense and proven things to help avoid contamination. But the truth is, it has to run its course and so it shall. Short of completely shutting down the country and locking everyone in their homes, there is no way to stop it; you can only delay the inevitable. Which is exactly what the shelter in place of the spring was all about. The only means of truly stopping it would be an effective vaccine. And seeing that it took years to develop most other vaccines, and seeing that the annual flu vaccine is typically only around 60% effective, I don’t see that happening.

The next best thing would be drugs to dramatically mitigate the mortality rate – an effective treatment so that if you do catch it, and if you do get ill, and if that illness does get severe, it can be treated and lessened. Because the reality remains that most people don’t catch it and those that do, don’t get ill, and those that do, recover fairly easily and quickly. If you have serious existing medial conditions and a compromised health and immunity system, you are in danger. That is why the first wave was heavily weighted in the elderly. However, it does randomly severely attack seeming healthy people and take them down. And that is the root of the fear. I know my odds are overwhelmingly in favor of not getting it. And if I do, my odds are overwhelming in favor of not getting ill. But there is that chance of being one of the outliers. Or worse, my wife being one of those randomly and severely attacked by it.

Yet despite all this, Halloween is here and I am trying my best to celebrate. As I posted earlier, I added a lot of new decorations – to the extent that my storage capacity is severely compromised and is now my limiting factor to getting more decorations; I may need a shed just for Halloween stuff!! But I decked out the yard and once we held our family party (albeit a very small one this year with only our nine in the immediate family), I moved a large number of decorations to the front yard, right out on the road, where I never decorate – this for the aforementioned town “Spook out”. I know that despite the weather last night (cold and snow) we had at least some people driving past to view the decorations. I wish I could do a better job with the street display but I simply can’t. I have planted and encouraged growth of all types of vegetation out there, to abate road noise and to afford us more privacy in the yard. So there is just no place to place to build a really decent display. I was basically limited to placing decorations at one spot at the edge of the property as it is the most open spot on the road frontage. But at least I tried!

Tonight we will go up to my son’s house and either trick or treat with them, or at least hang out a while and hand out candy. Then back home to watch some good horror movies and bask in the joy of being spooked on Halloween night again!! And tomorrow? Tomorrow begins the task of finding and taking down all the decorations hidden throughout the yard – and getting them packed up and stored until next year.

Well….it’s tomorrow already – the day after Halloween. I am seriously lagging in getting this post written and up on the site. To catch you up: we went up to the kids’ house and did a slightly abbreviated version of the traditional trick or treat walk. I would say about every fifth house was offering treats with all but two or three being outdoor no-contact tables (the others being the usual knock and grab from a basket). There were far less children out compared to last year, but I would say there were 30-50 around the neighborhood. It was nice, a large dollop of normalcy in an abnormal year.

Two moments of some comedic value. First, the almost 9-year old’s chosen costume was an all-black jump suit – a head to toe suit – as if he were in a skin tight bag. It was creepy and funny and all was well until he decided to dress for the chill of the night and put on shorts, a sweatshirt, and a winter cap. And he then became an almost normal looking boy with black legs, hands, and face. And we just could not let him go out like that; it just looked too controversial in these volatile times. Luckily he had an all blue one as well and he wore that.

The eleven-year old had not planned on going on and suffered a moment or two of preteen angst at having no costume. He rebuked a couple of ideas from his parents before disappearing to his room. He emerged ten of fifteen minutes later in the creepiest costume ever. He had taken a massive stuffed teddy bear, de-stuffed it, cut the back, and wore it like a skin with the feet at his knees. He squatted slightly and for all the world it looked terrifyingly real. An incredible last-minute Halloween save fueled by his artistic talent.

We awoke today to grey skies and a one-hour change to the time (forgot about that last night). And then the task of packing everything up and away. Since my inventory grew, so did my storage requirements; I am up to eight boxes and two giant garbage bags full of stuff. And I still have leftovers that hang in different areas for storage. It is just getting to be so much!! I don’t mind though, it is sort of my art, decorating for Halloween; or at least as close as I come to “art”.

The election is the day after tomorrow and tensions are mounting. The polarization of red vs blue is as sharp as I have ever seen it and I expect no matter the result, neither side will accept being on the short end of the vote. Wednesday could well prove to be interesting across the nation – that is assuming we actually have results by then….mail in ballots may muddy the waters.

And now with Halloween, and October, now in the rear-view mirror, the rapid transition to winter takes center stage. We’ve already had the first snow and the first freeze, daylight is waning significantly, and the trees are mostly bare – all harbingers of the dark months of November, December, and January. Given the pandemic and the election, they look to be dark months in more ways than one. Look for the light dear reader, find the glimmers of warmth and light where you can and embrace them to offset the coming darkness. We’ll get through it and it truly won’t be that long until the first crocus is rising through the February snow blanket. Stay well dear reader!