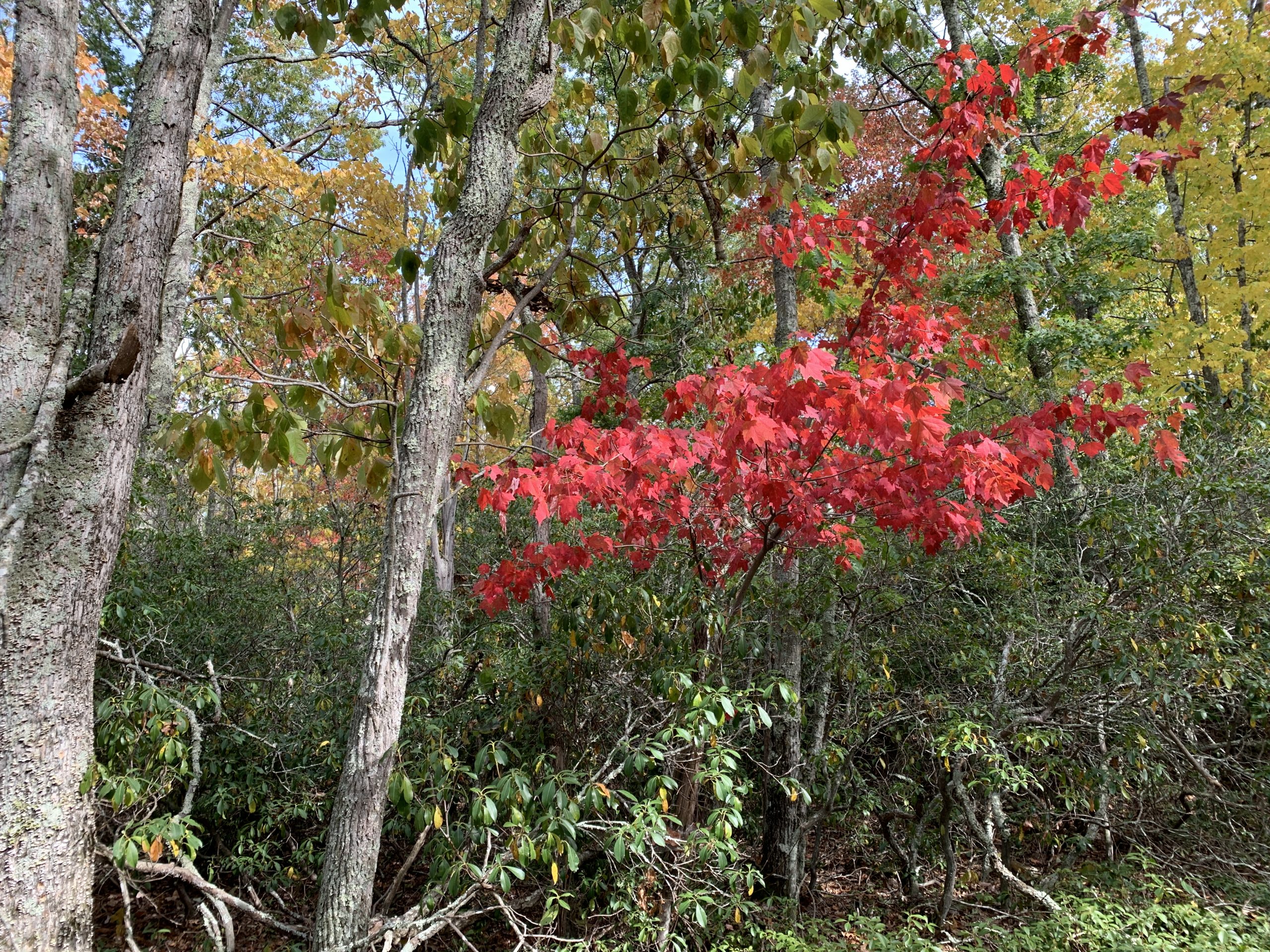 I am back to hiking at least partially regularly, until either the well-touted news media “surge” or “2nd round” of the virus actually occurs and we have to hunker down again, or the ice forms on the trails. Either way, I plan to be out once a week. My last ramble was through a deep section of forest with steep and cliffs and ragged ravines. Now before you all get this image of thousand-foot walls of rock in your heads, please remember that this is Rhode Island and not Colorado! The highest elevation in my state is 812’ above sea level, which barely qualifies as a bump in Colorado. So when we see an eighty or one hundred-foot rock wall here – it is a cliff!!

This section, with its ravines and intermingled swamps and cliffs always hits me right in the DNA every time I go. It is as “home” as any place I can imagine. And every time I go there, the adjectives primitive, primordial, and primeval. It is ancient – birthplace of upright walking mammals almost. The greens – all ten thousand shade and hues of it – are as vivid and vibrant as imaginable, more so even. Ferns, moss, and a seemingly endless variety of leaved plants just absolutely overwhelm the senses there. And it is hushed; the physics suggest the choppy landscape of cliffs and ravines dampen sound travel. But to me, the soul suggests that even the bird and animals understand the reverence of this place and respect it with silence. It is just that special.

The forest shelters, it embraces, and it nourishes; tens of thousands of animals, birds, and plants live within the canopy and forest floor, spending their whole lives inside the massive “greenhouse”. They are bred and born there, and they die there, returning their organic essence to the forest that had sustained it. Barring precious few, life spans range from mere weeks for some species to several dozen years for others. And they all know nothing but the woods.

We, on the hand, live in an artificial and manmade world of paved roads and composite houses wearing synthetic clothes, many knowing almost nothing of the magic of forest or the embrace of the woods. We all find our own special place for peace and solace in our lives; in the city it could be a church, a museum, a library, a coffee shop, or the like. Some, if they are lucky enough to live near one, go to the park – which is at least a bit of a return to nature. Certainly others find it jogging or bike riding or even driving on back roads with the radio cranked up. We all crave it and we all eventually find it somewhere.

But there is no place like the forest. I’m sorry, but there is not a library or church in the world that can provide same the peace and comfort as can the woods. The temple of Mother Earth is alive and wholly natural. And is healing. Trees crash down in the midst of fierce storms and the moment the sun returns its warm gaze upon the place, new life begins to take root and grow to replace what has fallen.

The distance from “civilization”, the solitude, the isolation, and the peaceful quiet there makes me feel as if I am only person on earth sometimes. And thoughts spring forth in my brain that I am the first to bear witness to this beauty. But the truth is, I am far from the first. Countless thousands have also passed through here, each no doubt feeling at least something akin to the peace and reverence I feel there. Yesterday, last week, five years ago….people were hiking through this area and renewing their spirit. And in fact, two hundred years ago people were passing through here, although back then they were merely passing through as the forest was all that existed in their world. The closest thing to a road would be the very trail I hike on, now downsized to a path from only light use by hikers.

Many of the roads from two hundred years ago still exist, some still used by cars and trucks and others now more dirt lanes, still passable but oft times challenging without 4-wheel drive. And each of these hold the memories of tens of thousands of people passing along on them. People trying to do nothing more than complete the exhausting twelve-mile journey from their farm to the mill. Others “commuting” from their homestead to the mill or foundry for a day’s wage. These days, little more than people riding their horse, ATV, or mountain bike; or hikers such as myself. These roads carry within them the blood, tears, sweat, laughter, and conversations of all those people, whether residents, sojourners, or visitors.

And being an avid student of archaeology, especially in my state, I know that the last two hundred years of footsteps on these trails are but a grain of sand in a desert. Occupancy in this area goes back to the last glacial retreat and the nomadic indigenous people who followed it. The Paleolithic period in this part of the country dates to 10,000 to 12,000 years ago. Small groups of these people, families perhaps, followed food sources and remained on the move. Their prehistorical records – campsites and artifacts – are uncommon due to their small numbers and roaming lifestyle.

The next period, the Early Archaic, appear around 9,000 years ago; also nomadic but larger groups of people and more prone to staying in one spot longer, resulting in more campsite with longer occupancies and therefore, more artifacts. The next cultures to move into our area, the Middle and Late Archaic brought increasingly larger numbers of people: both people in individual groups and the number of groups. And they settled more often and for longer periods until ultimately reaching the Woodland period with huge, and basically permanent, villages.

All of these thousands of years of occupation and inhabitation of our little state means that it is quite nearly impossible, if not indeed completely impossible, to find a spot to take a step where no other human has ever tread. All the places deep in the woods where you feel completely alone and can’t imagine that another human has ever been? Likely visited by thousands upon thousands of humans over the last eight thousand years or so. Humbling to say the very least!

It is, of course, impossible to know their thoughts as they gazed upon the same lush deep forest; some no doubt focused solely upon finding food or shelter, others for some different resources, and still others just idly exploring their territory. But I am certain that the feeling of peace, of calm, of contentment, and the embrace of the verdant green forest surrounding them and soothing them is one many experienced over the last number of millennia. Go find a tree and hug it dear reader, share the embrace with nature!! Stay well!