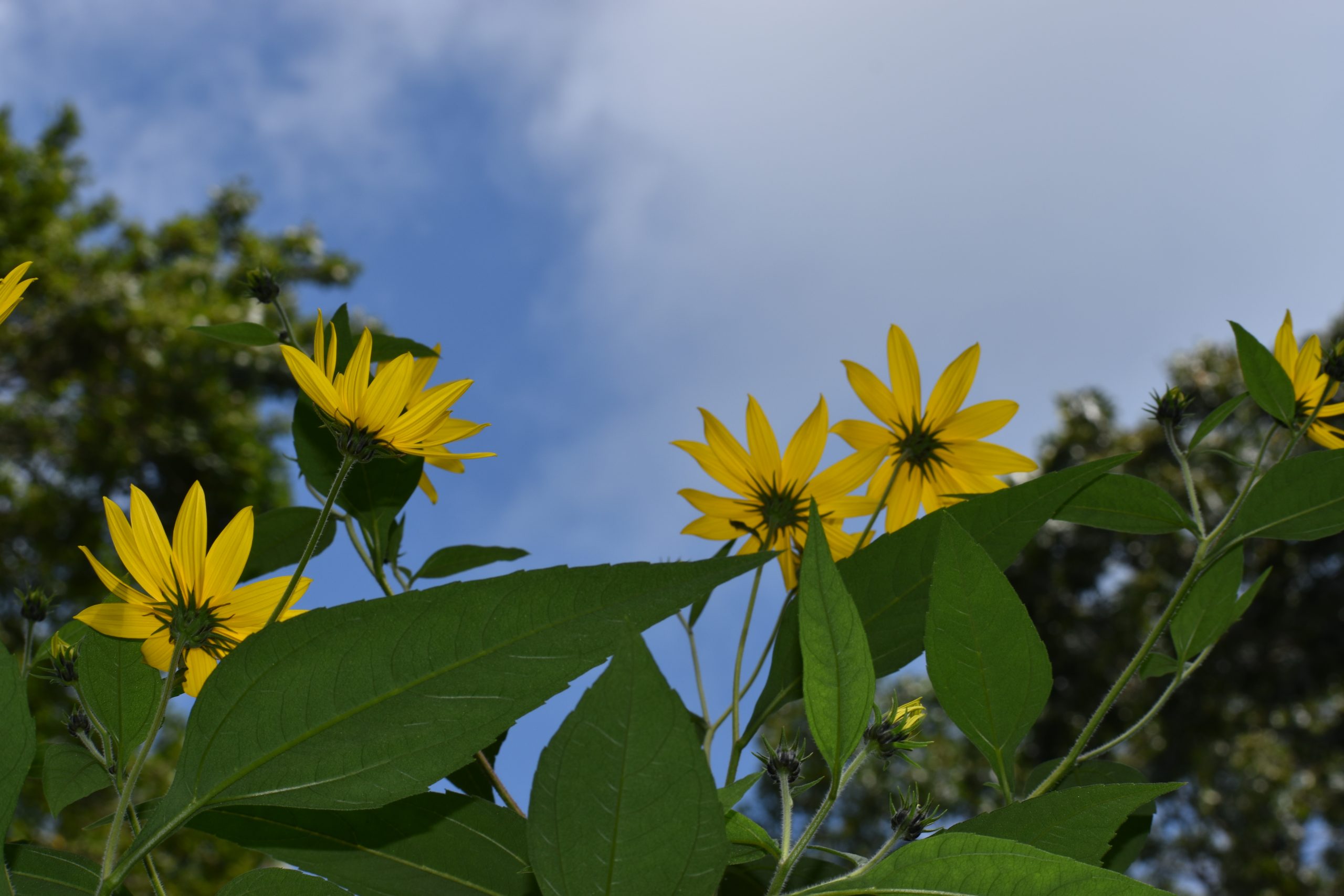 It has been a while since I’ve offered up a post, and I am sorry. Life is busier now, again, and my time has been in short supply. The grandkids have started school, but all three via distance learning. My daughter in law has to work on Wednesdays so we go up to their house in the morning to watch the kids and facilitate their learning, as they need it. And I have committed to myself that I will get out hiking at least once a week. I always hate leaving my wife home alone, but frankly she is so busy during the day that I expect she barely notices that I am gone!

We remain in a drought here; in fact, it has worsened by the sheer length of time since our last rain. I think we are now down 6” of rain – and not much in sight either. (Yes – the frog pond remains empty and dry!) So much of my time is spent trying to keep whatever is green in the yard, green… which is pretty much everything! Believe it or not, watering can consume up to eight hours of my day if I include the front lawn! (Although I only do the front twice per week.) Of course, I use a sprinkler so it’s not like I have to stand there and actually do the watering, but I do have to be ready to move it when the timer is up. Usually I spend time in other parts of the yard doing odds and ends while I am waiting to move the sprinkler, so I stay busy but still, I can’t go anywhere. Which also helps account for some of my time deficit.

Another issue I have been facing is a bit of…I don’t know… Frustration? Anxiety? Depression? Not at all sure there is a precise term for how I feel. I bought into the hunker down for two weeks back in March. And that turned into a month, and then two, and then into the summer. Last night I commented that this is like the old gag of someone on the ground screaming “no……” with an arm held up trying to shield himself from the danger – which turns out to be a steam roller several hundred yards away – moving at less than 1mph. And the scene repeats over and over with the steam roller still hundred of yards away. I’ve been told over and over to hunker down and take cover. And I did. And nothing came. And it still hasn’t come – at least as they kept warning me it would, every day, on every news channel.

Yes, people have died. But people die every day. I don’t find the numbers either alarming or troublesome – at least locally. The last I knew, four out of five were old, in a nursing home or extended care facility, and had other acute health issues. Yet the dire warnings of impending doom and gloom are saturation blasted every minute of every day. I admired Ruth Ginsberg and was saddened at her passing. But I thought to myself that her death might offer a day or two of respite from the incessant virus talk. But it didn’t: even when they were talking about her life, they kept a death and case counter on the bottom of the screen, lest anyone miss the message of how horrible this all is. It is simply inescapable.

And as you all know, I think, I take it seriously – the virus that is. I know it is an airborne transmission and is somewhat reasonably contagious. But the overwhelming majority of people who do catch it, have absolutely no ill effects – they don’t even know they had it. We have tested 25% of our town of 26,000 people and have had only 300 positive tests. And the only deaths have been in the nursing homes. So how scary is this, really? But I am not going to be the one who catches it, has no symptoms, and then gives it to my wife and she then is one of the unlucky ones who becomes severely affected. So I stay out of restaurants and bars, stay out of the movie theaters, avoid going into stores as much as I can and minimize my time in there when I do have to go, and have not gotten a haircut in over nine months. I try to be careful and keep the risk of exposing her as small as I can.

But it has been months of doing this and now….now they are advising that sheltering in place might be coming back; that things are getting bad again; that this is far from over. And I am tired of it. As I am sure is everyone else! But it has left me unhappy, discontent, unsettled. And that, dear reader, can make me irritable, can lower my frustration level, can shorten my fuse, and can result in me retreating into myself.

As I recently told a friend: Happiness is the reconciliation of what you have and what you want; of what you’ve lost and what you’ve found. It is uniquely and solely within your control – no one else’s. I wrote that based upon my own thoughts and feelings, yet I am still stuck in this pandemic caused rut; waiting for…..for I don’t know what!

I am a huge James Bond fan – have been since I was 10 or 11 and saw my first Bond movie (yes – Sean Connery). I have missed some theatrical releases through the years, but have seen every single film at least ten times, some of them much more than that even. And the newest release that I have been anxiously awaiting was scheduled for a spring release, which was cancelled. Because of the virus. And now it is due to be released in November. And as strongly as I believe that being in a theater with less than a half dozen people, all wearing masks, would be perfectly safe; I can’t take that risk. I can’t risk bringing it home to my wife. And that is incredibly frustrating: not missing the movie itself – I’ll rent it as soon as it goes to video – but the idea that here we are, ten or eleven months into the pandemic, and still have no vaccine, no treatment, and no idea who is safe and who is not.

As much as I love Bond movies, I love science more. The deliberate empirical process, and analysis of the resultant data, is a marvelous jewel to behold. And I rely on it heavily for a multitude of decisions in my life; always have. And while I have always held the scientific community in high regard, I am more than a little taken aback by the lack of any real progress with this virus: it seems like fifty first dates with new understandings creating new “rules” to follow weekly, only to be revised, reverted, or retracted the next week. Aside from keeping adequate distance and washing your hands, I am unaware of any other sound scientific instructions to help keep us safe.

Eating in restaurants is bad. Well, I guess it’s OK if you are outside and there are less than 25% capacity and you all stay 6’ apart. Well, I  guess inside is OK too now. It just keeps changing. If they know it’s OK to do it in August, why didn’t they know that in June or July? Why can’t they come up with any type of treatment for it to minimize the effects? There is a constant stream of news tidbits about progress with this vaccine or that vaccine, and then you hear it’ll be another year – or more. And testing? Test negative today and you could just as well catch it tomorrow. So I miss the point of all the urgency to test. And the antibody test that was supposed to determine if you have already been exposed to the virus – something that would be extremely useful to know – is now being poo-pooed by many is meaningless because they STILL don’t know if having had it once really means you can’t get it again.

So we wait, awash with uncertainty. Not knowing and not having any semblance of a timetable we can trust or set our life-clocks to. And that impacts my personal happiness. And even though I know I completely control my own personal happiness, I seem to be unable to do so, sometimes anyway. I mostly adapt and adopt a better attitude. But it is frustrating to have retired early in order to get out and enjoy life and now have to spend the next….how many months….sheltering? I wanted to go out for breakfast at least once a week when I retired – going out to breakfast is like the epitome of leisure time to me. A vacation was never complete without getting out for breakfast at least once. Now? It’s been probably around seven months with no end in sight.

But I have a wonderful wife, great kids, and spectacular grandkids in my life. I have a nice house and a great yard so the “haves” far outweigh the “wants” and the “founds” far exceed the “lost”. I may be missing breakfast, I may be missing James Bond, but I still enjoying life and I am still happy – mostly. I hope, dear reader, that you can find all the little things in your life that help tilt the balance from sad to glad. Be happy – as happy as you can be as often as you can be. Stay well!