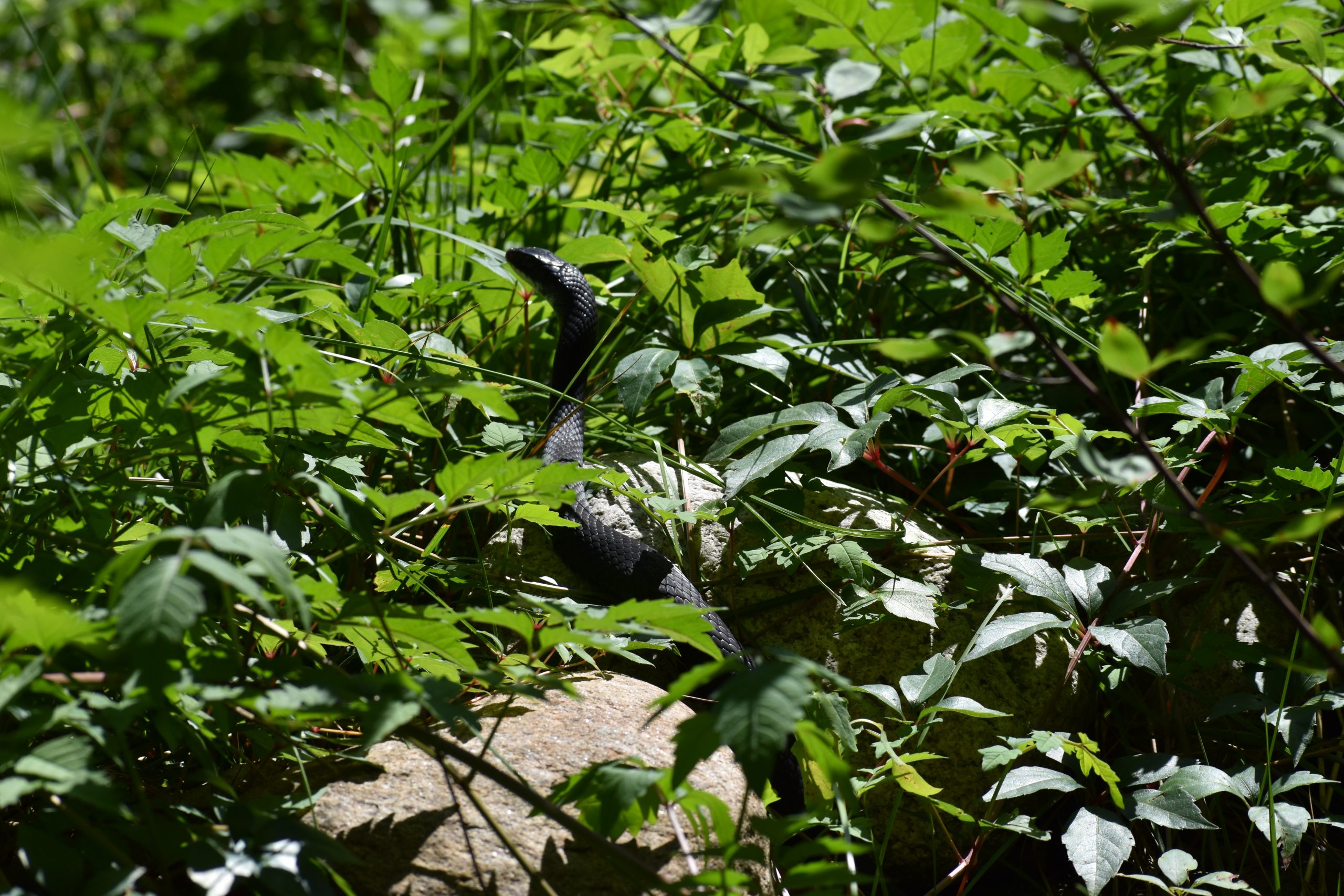 The other day in the yard, my wife yelled out to me: “snake”!! I ran over to have a look and there near the steps up to the back of the house, was a northern black racer, around 3’ long or so. I will say right now that there are no snakes in RI that can hurt you; there are some that may strike and bite if cornered but even at that, their bite won’t cause any real damage aside from the actual teeth in your skin mush like a thorn or bee sting. But despite that knowledge, I always give them an abundance of respect and distance. I have no desire to get bit even though I know it’s no big thing.

I may not have mentioned it but I bought a new camera and have been learning to use it on the birds and critters in my yard. So this snake was a great opportunity to take some photos. I grabbed the camera and went back outside and got off a half dozen shots before it spotted me and with slightly unnerving speed) shot into the vegetation and disappeared. That was 4 or 5 days ago and the snake has not been seen since. Of course, it is still here; just as it has bene here for quite some time I am sure. We just never ran across each other. But now that we have, I scan the whole area of rocks and vegetation every time I walk past it…which is often. I am barefoot 99% of the time in the yard and just don’t want to step on it and get bit. I generally do somewhere around 12,000 steps on any given day in the yard and a huge number of those steps are walking right past that area. And I did so without a second thought or a second glance. Because I didn’t know there was a snake there. But now I do and I have changed my behavior as a result.

Security, peace of mind, is extremely high on the list for many of us. And the truth of it is, it’s all in our mind. There is no real thing such as true security or safety; it is a state of mind, a belief within ourselves. Don’t get me wrong – you can take an incredibly complex series of actions to ensure your safety and can be reasonably right in believing you are safe and secure. For example, I used to train all our electricians in electrical safety and in lockout/tagout and following the steps, policies, and procedures provided them gave them an extraordinarily high probability of staying safe. Likewise, having airbags in your car, wearing your seatbelt, and driving in accordance with all laws will most likely keep you safe and sound. Of course doing all that won’t help you if a drunk comes barreling into you head on at 80MPH, not much you can do about that.

Without really knowing it, we believe in our personal safety and security by evaluating our risk to whatever it might be we are trying to stay safe from; fear of a thief breaking in to rob us leads us to install locks and deadbolts – possibly even an alarm system. We examine each point of entry and either deem it acceptable to our satisfaction or if not, we upgrade it so it does. Then once we are satisfied with our security measures, all we need do each night is ensure everything is locked and then we go to sleep feeling safe and secure. But are we really? Any professional criminal that wants to get into your house can easily do so. But most of us aren’t looking for 100% – it can often be impossible to attain. But we settle for “close enough”; for knowing that someone looking to break in will likely move on to the next house if they find our doors and windows locked.

I have walked throughout my yard over and over without shoes and without a thought for months now, feeling perfectly secure – because I had never seen a snake there before. But now that I have, I perceive a risk and feel less secure. The snake had been here all along but I never felt threatened because I didn’t know it was there! My security in the yard was all in my head. Now I still wander around barefoot, but I look at the ground around where I saw it, just in case.

This is also how I still view the virus. It is surely deadly…to some. And while highly contagious, it is barely noticeable to many who get it. I remain convinced that the extreme panic and anxiety gripping this nation is completely due to the media hype and not the virus itself. My town of 26,000 has had only 256 positive tests in the six months of this pandemic; only 9 since the first week of June. Yet stores, shops, restaurants, and the like are all packed. Recall when it first came out we had to wipe the keypad on the ATM, wipe the gas pump, the door knobs, the shopping carts, the groceries? Not any more…..turns out it doesn’t spread that way.

Security  – a state of mind. If the first thing you hear at the start of every single news report or the first thing you read in every single news alert or Tweet on your phone is the up to the minute number of Americans who have died, you are going to really begin to doubt your well-being, your safety. You simply cannot exist in a constant barrage of deaths and new cases being thrown at you every day. There is absolutely no logical or rational reason that I can think of as to why I need to know the death total and the new case count every hour, every day. It is literally blasted at the public by the media and the only possible end result is panic and anxiety. During all the other pandemics in this country, even as recently as the severe flu season of 2018-2019, no one knew how many people were dying unless they happened to read an article somewhere; neither news media or social media spent any time spreading death or case numbers. Much like the snake, you don’t know about it, you won’t fear it. But see a snake, and then see memes, Tweets, and CNN broadcasts all day and night long telling you how many new sightings of snakes across the US today and how many bites there were, and you will quickly begin to freak out and become terrified of snakes.

The reality is that as of August 1st, 142,158 citizens have died of the virus. Horrifying. But won’t they don’t talk about is that of the 142,158 deaths, 113,205 of the were above the age of 65. And in fact, most of those were above the age of 75. That means that only 28,953 people below the age of 65 have died from the virus – that’s right….of the huge number blasted to us daily by CNN, only 20% were below 65 years old. And that fact completely changes my sense of personal safety. Rather than thinking all these people are dropping throughout the country every day from this virus, it turns out that 80% of those deaths were old people in poor health, in hospitals, and in nursing homes. Know the facts before you panic.

Kids going back to school is now a huge subject of debate. And as you know dear reader, I have three school aged grandchildren. Additionally, my daughter is a school psychologist and my nephew and his wife are both teachers. But I am 100% in favor of opening the schools and getting the kids back into a classroom. Home schooling does not work for the majority of kids. They simply do not learn what they need to learn at home. Most parents are not good teachers: they were not trained or taught to do so. The longer our kids are out of the classroom, the farther behind in their education they will fall (most of them anyway) and they may actually never catch up from what they are missing. Never mind the loss of social interaction and growth so vital to children that they get in school.

But the media is now running a strong campaign to keep the schools closed. They are doing so with numbers intended to make every parent in the country fearing for their kids’ safety. Huge numbers of new positive tests in kids is the latest tactic. They also showed pictures of crowded hallways in schools that have already reopened and reports of new positive cases coming out of schools just opened (this despite the fact that it takes 7 to 10 days to acquire the virus and test positive so any positive tests in the first week of school have nothing to do with them being in school.

But do you dare chance their safety, even knowing how important school is to your child? Again, I turn to the data. As of August 1st, of the 142,158 deaths in the US, only 45 were under the age of 15. Only 45 children younger than 15 have died from this virus since it began over six months ago. During that exact same time, 13,119 children younger than 15 died of causes other than the virus: drownings, falls, car accidents, murder, suicide, etc. Only 45 from the virus and 13,119 from other causes. Knowing and understanding the data, the facts, changes your perspective and it changes how you perceive your personal risk. And therefore, it also changes your sense of safety and security. Stay well dear reader!