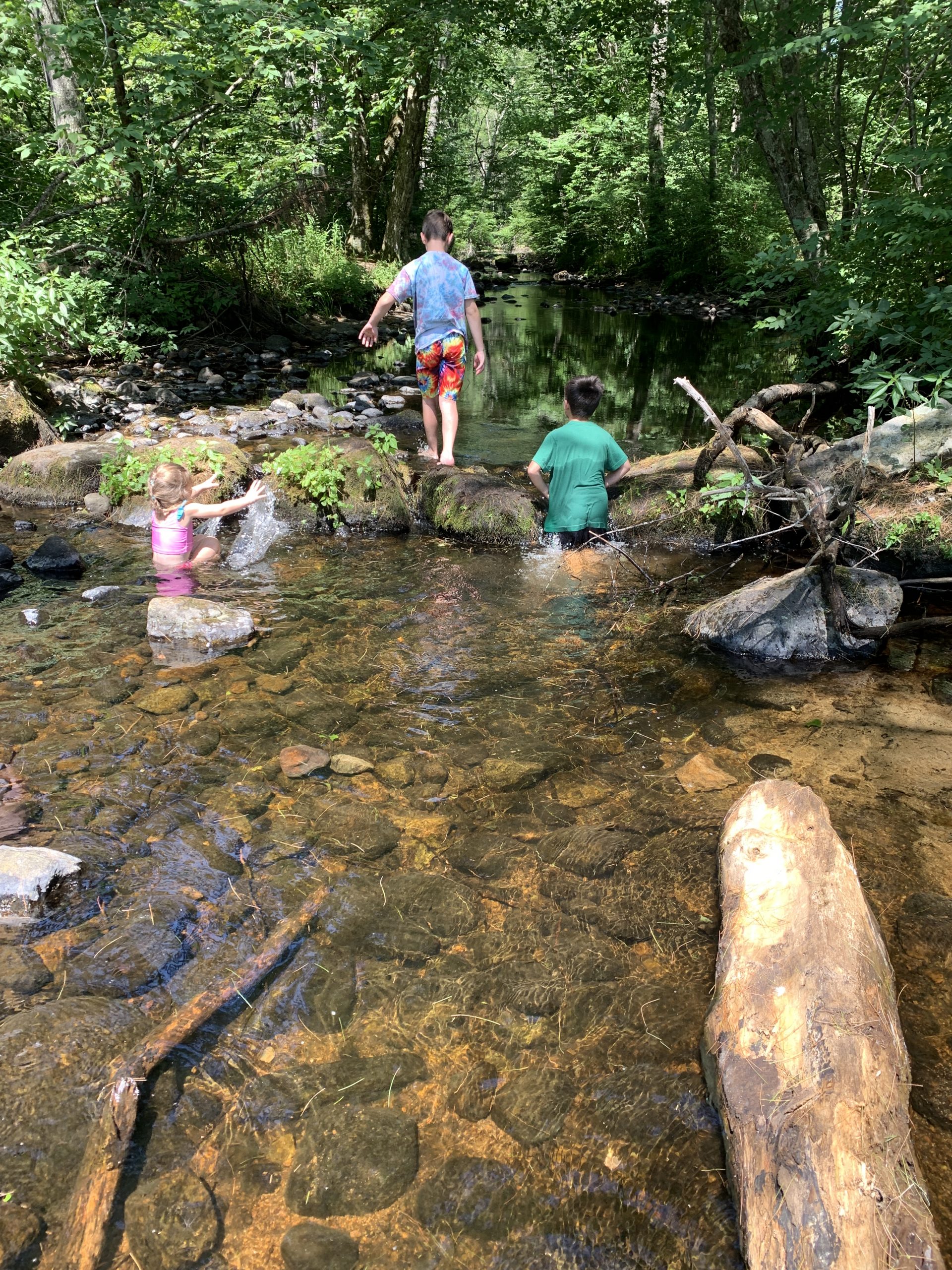 We are steeped in a good ole’ fashioned heat wave here: been well above 90 for a couple of days and the next few are forecast to be the same. And no rain. I am kind of enjoying it but the accumulation of years in me has made it more difficult to stay out and do a lot in it. I used to thrive in this kind of heat, it energized me. But now it basically saps me, takes the wind out of my sails. I still get out and do some work, but while I used to be able to do five or six hours at a task, I am down to two or three. Such is life. That notwithstanding, I am still reveling in this summer weather like the ones I used to love as a child.

However, the heat has raised some issues; the health and well-being of my yard being high on the list. Don’t get me wrong, I am fully aware that nature is well prepared for, and completely comfortable with heat waves coupled with lack of rain. My lawn is brown in many areas, but nowhere so badly as out front where parched would probably be the ideal adjective for it. The grass is actually crispy in places. And it will come back; once the heat subsides and the rains return, the grass will return as well – green and lush once again. The side and back get less sun and are the better for it, but they are also better because I water those areas. Why not the front as well? Because my town has water use restrictions in place and the front is out by the road where it could be seen while the rest of the yard is hidden from street view.

Now before you jump on a table and accuse me of being a criminal, recklessly breaking town laws, let me say that it is not a law, it is a policy. And it is a policy I completely disagree with because it is precipitated purely out of mismanagement by my town. But beyond that, residents are permitted to water vegetable and fruit gardens and in most of the areas I water, I can point to raspberries or some other fruit and argue that I am watering them and that the lawn getting watered is a happy coincidence. I know, I know….a bit of a stretch, but that’s my story and I’m sticking to it!

Yesterday, I finally took a detailed look at the watering restrictions for this year and they are actually different than years past. This year residents may water their lawns twice a week, with specific days depending upon where you live, but not between 10AM and 2PM and no watering on Wednesday, Saturday, or Sunday. They will allow flower and vegetable gardens to be watered on any day but only by hand – no sprinklers.

Why? Because our water supply here comes from underground aquifers; seven of them I believe. And they have a limited capacity. And once upon a time, we were fine – no water use restrictions, no lack of capacity. But this town is greedy; they are money hungry. They have grown to realize that this is a desirable place and people want to live here. Property values continue to increase and housing prices are now actually ridiculous. Supply and demand. And the town began reaping huge sums of revenue with the tax dollars pouring in as property values climbed. And as if that wasn’t enough, they actually continued to raise the tax rate – more money for the coffers. But developers also saw an opportunity to make a lot of money. And they developed wildly, with the full support and encouragement of the town.

Now some would argue that this is progress, this is how communities grow, and they’d be right…sort of. They’d be right if that community took that money coming in with taxes and put it back into the infrastructure of the town: more roads, increased traffic capacity, more power in the grid with better distribution, more schools, and so forth. Oh – and more water capacity if needed. You can’t just keep stuffing home and people into an area without upgrading that area to support the additional people! This town was founded in 1674. Many of the local roads we all use every day are 80-100 years old. We have not added anymore new local roads in probably 50 years. We’ve run highways into and through the town, but they are for the commuters or those merely passing through; a highway does me no good to get from my house to the grocery store and back.

So they have continued to build. In just one single development on the main road through the town they added 20,000 sf of commercial space, 220 apartments, 80 senior apartments, 41 condominiums, and 200 single-family homes. Conservatively that has to equate to well over 1,000 residents – all new to the town. They have only one main road with which to enter or exit and it is a single lane road that is already extremely busy much of the day. The traffic load once this place is fully populated will bring traffic to a crawl. But I know how to circumvent that if need be – that really isn’t my complaint. These new residents need water. And the only place to get it is from an already overburdened water supply that has been operating beyond capacity for years. Why did they allow that many new residents without doing a thing to consider the roads, the power grid, the water system? Tax revenues that they can use to build new town offices, that’s why. And I will leave this topic with one final comment: they eradicated close to 100 acres of wildlife habitat to build it, giving the animals no choice but to try to find another place to live in already rapidly shrinking wooded areas. Unconscionable in my opinion.

To get back on point, the heat has beaten down the vegetation but has also made any outdoor play with the grandkids difficult. Two of the three have pretty much outgrown the blow-up pool that served us so well for the last eight years or so. I have sprinklers, a 75’ water slide, and the aforementioned pool and none of that is quite attractive enough anymore to the almost 11-year old and only marginally to the almost 9-year old; the 5-year old still loves it though. And so we awoke yesterday (Sunday) to another hot and humid day in the midst of a pandemic. We avoid the beaches due to the virus but the beaches are only running at 50% capacity or less and they fill up very early in the morning, never mind the traffic issues associated with that. Many weekends we end up at my nephew’s house where he has an in-ground pool and the boys swim with their cousins. But they were busy this weekend and we knew we weren’t going to be going, so I was at my wit’s end as to what to do with them to get them outside yet still escape the heat.

We went to the woods.

We went to the woods, but not to hike – as much as I would have loved to take them on a hike, a day as hot as yesterday was the day to take them on a hike of even a mile, especially given their age and ability range. But we went to a trail that fully parallels Wood River for the entire length. No need to hike any distance to reach the river, it is right there no matter where you are. So we parked (only three cars parked there) and walked less than one hundred feet to the river. As I mentioned a moment ago, we’ve not had rain; nothing truly appreciable in a long time. And the river reflected that reality: it was as low as I’ve seen it in a long time. But low and dry are not the same thing and the water was still flowing strong creating eddies, whirlpools, and little waterfalls all over the place.

From a depth perspective it was mostly below one foot, but some areas had been scalloped out through the years to as much as three feet deep – especially at elevation changes which cause mini-waterfalls. And the kids found them very quickly. The water was of the earth: brown and stained with the accumulation of branches and downed trees that have settled into the river along its entire path. The name Wood River is well suited indeed. But it is good, clean, mostly clear water and cooled from its sources, it is ideal for cooling off on a hot day.

They each took a turn sitting in a rock waterfall and then at the basis in their personal whirlpool letting the water cascade over their head and neck. They found countless bugs, beautiful rocks, and frogs. Several frogs in fact, all in the immediate area. The oldest was immediately hooked by the frogs; the younger two went over to look and then went back to swimming, but the 11-year old began a pursuit – a cat and mouse game – that lasted pretty much the whole time we were there. And they weren’t small frogs, they were decent sized to the point that you were not picking one up without using two hands and a really good grip. Fearful of harming the frogs, he never ended up actually picking one up to show it off, but he did touch them and cup them under his hands a number of times. What more is there in a young boy’s life than splashing in a water hole and chasing frogs? It was pure magic – for me, watching them – as much as for them.

And the re-connection to the woods was the delicious and delectable icing on the cake for me. As you know if you’ve been reading my mundane posts of late, I spend pretty much every day in my personal woods at home; think I know every twig and leave by now! And it is wonderfully enjoyable. But it is not the “big woods” where civilization ends and nature begins. That magical place was revisited yesterday and even though we were less than a quarter mile from the truck (we ended up walking up the trail a short bit to explore), we were in the “big woods”. And dear reader, there is nothing like it. I wish you some time in your personal woods – stay well!!