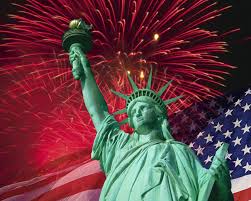 Happy 4th of July dear reader! At least to my US readers; I am not so America-obsessed that I think the whole world celebrates the US independence. But truthfully we are extremely proud of our freedom and our independence and our “exuberance” can sometimes overtake our sensibility and we can get just a bit over the top… And that is why this holiday will be such a telling test for this country.

Independence is an oft misunderstood term; it means to be self-supporting, not reliant on anyone else, not under someone else’s control or rule – to not be controlled. We fought for, and earned, our independence from British rule in our Revolutionary War from 1775-1783. And a group of extremely smart people sat and thought, argued, and negotiated with each other for a long time to develop and execute a new set of rules for our new country, and its citizens, to live by: our Declaration of Independence and our Constitution with the Bill of Rights. Indeed, we left one set of rules and replaced them with another, different, set of rules. Because people cannot live without rules, even free people. A society can’t even exist without rules, never mind thrive and flourish.

Consider just your small town, wheresoever that may be. Are your neighbors allowed to break down your door and take whatever possessions you have that they so desire? Can they just hop in your car and take it? When you deposit your paycheck at the bank, can the bank then just take that money and use it however they want? If you complain about your food being uncooked in a restaurant can the cook come out and stab you? Of course not – laws prevent these things from happening; laws that prohibit those kinds of behavior and provide serious consequence for their disregard.

So is that freedom? Is that independence? One could argue that we remain under control – we are not fully free. That would not be a rational argument, but there are certainly those who have expressed that opinion through this nation’s history. And that misguided interpretation of freedom is rearing its ugly head a lot lately in this country. People are taking offense at a seemingly endless list of American icons and demanding their removal as it inhibits their freedom. There is certainly room for an honest, calm, intelligent discourse on the changing values of a culture and agreeing on a course of action; that is how a centered and cognizant society functions. We did so with the Swastika – the vile symbol from WWII that became a symbol of hate to the Jewish people. We recognized what it had morphed into and took action. But we did so with calm discussion and rational thought. Yes, we are all endowed with freedom of speech and expression; feel free to hang a Swastika in your home. But you can’t paint it on someone else’s property.

So now we are throwing away Uncle Ben, Aunt Jemimah, and Elmer Fudd’s gun. The Washington Redskins may change their name. And of the latest, Mt Rushmore is coming under attack. Statues of great people are being torn down everywhere in the name of freedom, despite the fact that history-ignorant people are clueless that their freedom to tear down those statues were often borne on the backs of the very people whose statues they are trashing. That is not independence, that is not freedom; that is selfish and irrational reckless behavior, spawned more of the moment, the mood, than the history behind the icon. Out of a cry for freedom, we have turned to anarchy and looting.

That’s not to say that there aren’t some things that need to change, but that change has to come from a conversation, a calm discussion and with negotiation; not via brute force. That is not what Washington and Jefferson and all the other founding fathers envisioned. Yet at this very moment, a “reported” on CNN is attacking the four great presidents chiseled into that mountain. She would not have her moment on the air, expressing her anger and imagined misjustice, were it not for those great men. They lived in a different time, with different social morays and ideals, many of which are different than todays. I can’t blame someone who lived 150 or 200 years ago for their actions then if those actions were considered not just right and proper, but exemplary at that time. For all we know our actions today will be condemned and criticized by our future citizens in 200 years; how dare we throw away and erase our history?

But it hasn’t stopped there; the face mask, that ubiquitous symbol most American’s associate with either laboratories or people in Asian cities such as Tokyo or Singapore, is perhaps the greatest source of controversy today. Wear a mask. That is what we are either being asked, or told, to do by our state governments. And once again we’ve polarized ourselves into two frantic groups of wild-eyes fanatics attacking each other. The mask supporters call those against masks selfish, uncaring, stupid, ignorant, uneducated people who are endangering life on this planet. Those against masks call those who wear them blind, foolish, hypnotized, sheep who swallow any and all drivel coming from the government and who are just laying on their backs and rolling over to let “the man” do whatever he wishes to them.

Wearing a mask is an altruistic act, an act of caring for others as it is intended to protect them from the possibility that you could infect them. Wearing a mask is an act of cowardice, and act of allowing them to control you. That is where we are at on this Independence Day. Don’t get me wrong, I know dear reader, that there is a huge segment of our society that sits in between, in the middle. People who care about others and want to help protect them, but who also wonder how much a bandana really does to protect anybody. Personally, I wear a bandana to every store. And when a delivery person comes into the yard or even when I do curbside pick-up. I do not wear it hiking or riding my bike, but have it with me in case I meet someone and we come into close quarter. Why not? I am not convinced it really does a whole lot, but it probably does something to help protect the other person. And on that chance that I am wrong and it really does help, why not wear it?

Consider seat belts, motorcycle helmets, or smoking in bars and other indoor public places. It is now mandatory to wear a seat belt when operating a motor vehicle and not just the driver but all the occupants as well. It is the law. Did people howl and scream as that worked its way through the legislation process? You had better believe it! They screamed about how it was infringing on their personal rights and freedom, but it became law none the less. Much the same with motorcycle helmets except that was handled at the state level, not nationally, with some states requiring them and others only requiring one for a passenger. Smoking laws were passed solely to protect the others – not the smoker but the people around the smoker. People screamed about their personal right to smoke but the laws were still passed. Sometimes as members of a society we have to do things to help and protect others; wearing a mask is no different. It is not about independence of freedom; it is about doing the right thing for others – the needs of the many outweigh the needs of the few.

So today I celebrate my personal independence on this 4th of July by doing almost nothing; we’ll go to small family cookout with our kids and grandkids and then come home. No sitting with thousands of others at a firework display or going to a beach packed with people. We’ll do the responsible thing and wait for next year. Because being free is not always about what I want, but rather, is about what my society needs. And I strongly suspect that is exactly how much of us throughout this great nation will celebrate it. The news media doubtlessly will barrage us with images of more statues coming or flags burning or some crowded beach somewhere and will not show us the empty beaches. But I believe those will be the exceptions, not the norm for this Independence Day. Stay well dear reader!