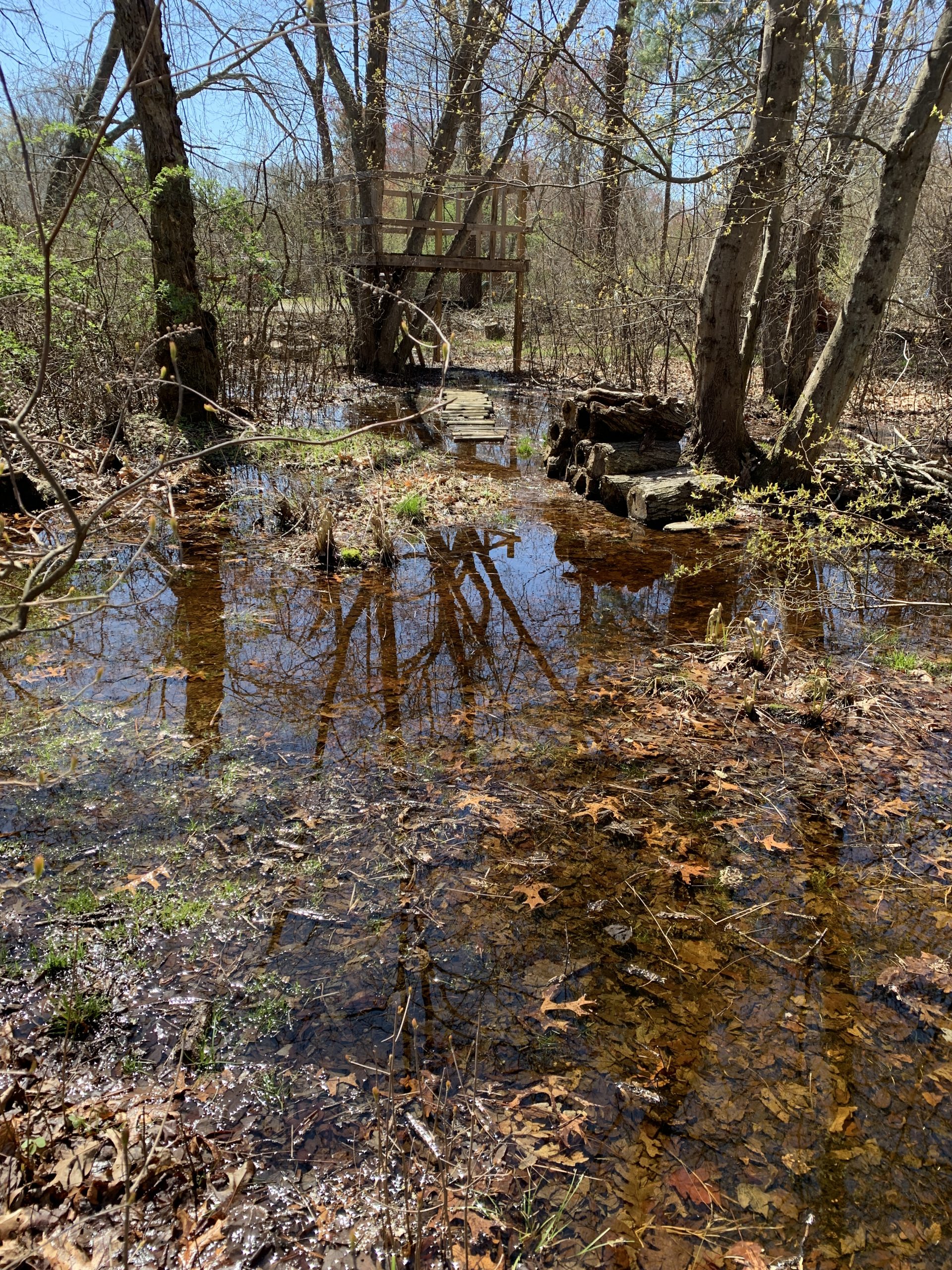 The veil of winter continues to lift away from the land and the coming depth of summer is building. Everywhere you look the land is bursting with layers of life and growth; just a short walk in the backyard and I see literally hundreds of birds, rabbits, squirrels and chipmunks running about, and snakes, turtles, newts, and other “critters” are out exploring – just as am I. And the vegetation? The explosive growth is almost visible to the eye! One can almost watch the stalks lengthen, the ferns unfurl, and the leaves broaden and reach for the sun. Spring, has arrived.

I am considering, pondering, wondering, about making a frog pond; and by making, I of course mean digging. The lower yard, with all the woods (and my nefarious foe the bull briars) is literally low, as in maybe five feet of elevation difference from the front yard to the back – possibly a little more. And being near the coast, we are fairly close to sea level and therefore, the ground water level is not far below the surface. In fact, the water level in my land is so high that I had to spend three-times more for a new septic system than most everyone else in our town would have to spend. In the late winter – early spring, when the snow melts and the rains come, the backyard floods; floods as in ducks swim about freely. The far back end of the property is somewhat higher, not nearly as high as the front where the house is, but higher than the area closer to the house, so you end up with a natural pond of sorts in the middle of the yard, between the much higher front and relatively higher far back end. And once the weather breaks and becomes warm and sunny, the water level falls again and the entire yard is dry.

All I want to do is “lower” the yard level in a specific and confined area to reach the now-deeper water level. Of course, the issue is that the warmer and drier the weather becomes, the deeper the water level becomes. The property next to us, on the other side of the stone wall, has a pond. The pond overflows in the wet season and once our land floods, our yard becomes one with their pond. In the summer the water level of the pond drops, sometimes to the point where you can’t even tell if there is any water left in the bottom. And that is what will happen to mine if I decide to dig one; it will be seasonally full or empty completely dependent upon the weather. And to be a frog pond, you really do need it wet during the summer months when there are actually frogs about.

There are two options for me: one is to dig it and then install a liner in the pond. A liner will stay filled with water irrespective of ground water level. The other option is to dig it really deep – deep enough to reach the lowest levels of the ground water. But consider a 15’ or so roundish hole that is deep enough to reach the ground water in the summer. Assuming I have to down six or eight feet, when the water level is low I’ll essentially have a cup in the ground: steep edges dropping off to the water down below. That is useless; to have a viable pond where the water is six or eight feet below ground level, the pond would have to be something like fifty feet or more in diameter, so as to allow a gentle slope down the lower water level. And I just can’t dig a pond that big! Well, better stated, I won’t dig one that big!

Ultimately, I think I will end up digging as wide and deep as is both practical and viable as “real” pond and then wait to see. If it turns out I can keep some amount of water in it throughout all but the driest drought times, I’m good. If not, I can always add a liner later – more work for sure, but not impossible. The bigger question now is how to obtain said hole; how to go from the land as it is now, to land with a big ole hole filled with water in it.

At this point I should mention, I’ve already done this once – a frog pond that is. Years and years ago. My wife wanted her own frog pond so I picked a spot I thought to be the lowest in the bottom part of the yard and I dug; I dug for days and days. And when I was done, I had a hole approx. six foot in diameter and around three feet deep. I then installed a rubber liner in it, lapping the liner up on top of the surrounding ground and covering it with rocks and dirt from the hole. And it worked. It worked until a large branch broke and fell into it and pierced the liner; the minute the branch was pulled out the pond drained. And that was the end of that. I pulled the liner and allowed time to fill the hole (and I often helped with dumping sticks and leaves into it). It is still there, to some extent, but is little more than a depression now. But I did learn a lot from it – enough to know that this one is going to be a tough one – a lot of work.

The first one was hand dug, this one will definitely not be! Just too much area, too much depth, too many big rocks, and too many roots. This one will have to be machine dug, probably a mini-excavator. I’ve already begun looking at who has them for rent, the cost, etc. Turns out getting it won’t be much of an issue at all – they even deliver it and pick it up. I think the biggest problem will be my operation of the excavator, a skill that I’ve never had the chance to try or learn. So it should be interesting!

I don’t have a specific time frame for this, but certainly this summer. I figure I should wait until I have at least some confidence that the water level has dropped to a typical summer-time low so I only have to dig one. I’d hate to dig down three or four feet and hit water, complete the job, return the excavator, only to have it go dry in a few weeks. I really only have one shot at getting the depth correct and want to maximize my odds of success. And as I said before, I can always add a liner later, if I have to. But regardless, this will be exciting and fun. And a welcome distraction from this tiresome virus I might add.

Speaking of the virus, like the ice in late winter and early spring, the layers of protection and fear are melting away and becoming thinner and more transparent. I used to wear a new pair of rubber gloves every time I went out and got the mail; now I wear no gloves and merely wash my hands when I am done with it. Likewise in stores, which I still don’t frequent often but do venture in once in a while – no gloves, just a mask as requested by the governor. We went without an outside meal up to a couple of weeks ago when we finally indulged in takeout food and now get takeout at least once a week. And my precious grandkids now come over and frolic in the yard for hours at a time once again. They don’t go into the house, except for the bathroom yet, but that is coming; we’ve decided to have a sleepover on the last weekend of May! Barring something really bizarre like a huge uptick of cases and hospitalizations in the state, or someone getting sick, we will take that next great step and resume living and loving them as grandparents are supposed to do.

You see the same general thawing throughout all the towns and cities here in our state and I would bet yours as well. People are tired, they are worn down, they are done. They sheltered (many folks anyway) for most of the entire spring season. They gave up school, church, sports, dining out, and a multitude of other things and patiently waited for what were told would be to weeks, then two more weeks, and then…. Well, they’re all tired of waiting and are moving to end this on their terms. Thankfully, most states are on board and in sync with people and things are “officially” opening as people are stepping out. Much as spring tadpoles precede the summer frogs, the transition into summer is near and it is time to get out and live. I know I plan to! Stay well dear reader – get out and sit in the sun and stay well.