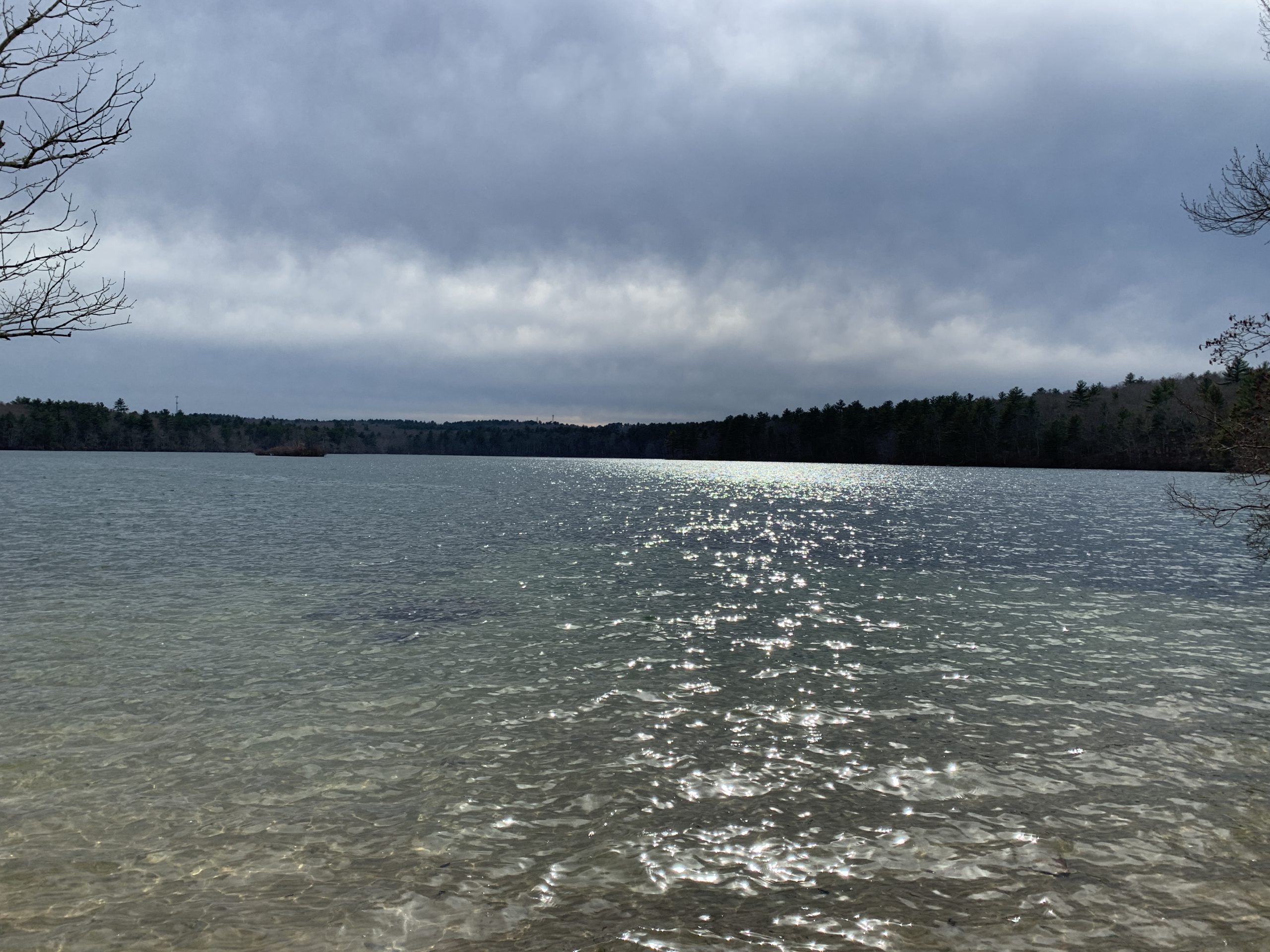 We got out for a hike today, it was a gorgeous 60-degree sunny day when we headed off, but as the clouds rolled in for the evening rains, the temps dropped back into the 50’s. No matter though, it was absolutely wonderful to be back in the woods. We chose an area I’ve never hiked before called Big River. The area is almost 8,500 acres of streams, ponds, and trees and has literally hundreds of trails crisscrossing throughout the entire area. Most trails are poorly marked, many not marked at all; you really need GPS and a trail map to navigate confidently. Happily I had both, but it was less necessary today as I chose an easy to follow four-mile loop that wove around two of the larger ponds in the area.

The story of this area is actually quite interesting; I won’t go through it all, but will touch on a couple of points of interest. Since 1928, the state had been looking for a back up to their largest reservoir, the Scituate reservoir. Big River was chosen and plans were drafted and in the 1970’s, the state used eminent domain to buy the 8,500 acres from 351 land owners and took ownership of the area. But (there’s always a but, isn’t there?) there were hurdles and obstacles facing the plan to dam the Big River and to flood the land for a reservoir. Ultimately it was the EPA that stepped in and denied the permit and announced they would not endorse future plans for this, mostly due to the huge number of swamps, wetlands, and streams that would be destroyed and the hundreds of species that would be displaced by doing so. The land remains designated as “open space” and in 1993 the state passed a law that the “open space” shall not be sold. To this day the State of RI maintains that the land is being held as a “potential future water source”. And as such, the land is not maintained as are all the other properties managed by the state. It remains essentially the same as when they took the land fifty years ago, except that a few years ago they brought in equipment and manpower to clean up the huge mess of illegal dumping that had been taking place, and then blocking off the roads in to prevent reoccurrence.

Over the years, dirt bikers and mountain bikers began creating their own paths and trails throughout the area, followed by hikers. Quickly the various unorganized endeavors became informally organized and a couple of websites for dirt bike riders began posting trails mapped with GPS by riders. This eventually became more widespread as hikers began similar mapping and in the blink of an eye, trail maps became available to download or print. Today was a Tuesday, school in session and people working as usual, yet over the four miles we ran into easily a half dozen people, so the area has clearly become well used. There are mapped trails that range from a couple of miles up to seventeen miles so there is much opportunity! The elevation is not extreme so the hiking is not challenging, at least not around the ponds; we’ll see what future hikes have to offer.

The woods is awakening, slowly – sort of the sleepy stretch we all do after a long, solid night’s sleep. It has been an extremely mild winter here, and at least as of now, the advent of an early spring. Many trees are beginning to bud, mosses are deepening their green, and some plants are popping up out of their winter’s sleep, especially crocus and daffodil – I even had a small insect land on my hand at one point. All harbingers of that magical reawakening of the woods.

At the start of this, I mentioned the evening rain, which as forecast, did arrive. Given the daytime temps well above 50 and even touching 60, coupled with the rains, today likely kicked off one of the rarer natural displays one can stumble upon in the woods – the wood frog orgies. We were lucky enough to encounter this twice over the last twenty years; the first time made me wild with curiosity at what I was experiencing and the second time wild with excitement to be able to witness it again. Wood frogs hibernate through the winter, and can actually full freeze in the severe cold, but they thaw in fine health as early spring crests the horizon. And on the first day with temps above 50 and with rain, they all begin a journey, a pilgrimage form wherever they spent the winter back to the vernal pool or pond of their area. They come from every direction, hopping and jumping not by the hundreds but by the thousands, all converging on the specific pond of choice. And once there, they all begin to vocalize, signifying the beginning of their courting and subsequent mating. And when I say vocalizing, I mean yelling, screaming, if frogs could do so – the volume of thousands of these tiny amphibians vocalizing is both deafening and amazing.

We were hiking near Beach Pond when I heard the sounds, completely unfamiliar and difficult to pinpoint an origin. We left the trail and wandered to and fro through the woods trying to zero in on the sound. And then we began seeing the frogs; they were in the branches, the leaves, on the rocks and on the trail – all moving in the same direction. We came to a swampy pond and clearly the genesis of the symphony of frog croaks in the air: thousands upon thousands of frogs. Everywhere you looked there were frogs and quite likely there were frogs in between everywhere you looked as well. And they were all in full voice. It gave me goosebumps. Sometimes, you just know you are in the midst of something special; that you are witnessing something almost no one else ever gets to see, or probably even knows about. When I got home that evening I jumped on the PC and Google quickly explained what I has seen and heard. The temps and rain the previous day had triggered the mass migration of the frogs in the area to this particular pond where they courted and then mated. Once done, they would all turn around and head back to the stream, pong, pool, or puddle from where they had come. Amazing.

The second time was a few years later and was similar, except that it was in a completely different location. This time the rains had just begun, during the hike, and the frogs were still early in their journeys to whichever pond they were headed. Some were obviously already there by the loud vocalizations coming from across the trail, but the trail itself was littered with little wood frogs all heading for that pond, not wanting to be late to the party. We didn’t hike down to the pond as it was raining and they were still gathering, but also because we immediately knew what it was. I expect that, were I to go into the woods tomorrow, if I was lucky I would find the frogs all hopping along to this year’s party.

There is magic everywhere, sometimes you just need to be lucky enough to catch it. The frog orgies are certainly a great example of that, but frankly, for me, I see it every time I step foot into the woods. The springs that for streams that feed swamps and ponds; the rocks that become carpeted with the brilliant greens of the mosses; the cliffs and ledges whose clefts and cracks provide just enough space to allow a seed to take root and then turn into a tree – a tree that first grows out horizontally to the ground until it has attained enough distance from the rock face to then turn ninety degrees and reach for the blue sky and the sun; all examples of the magic in the woods. Far from still and static, the woods are ever changing and evolving to support the myriad of species of both fawn and fauna within them. I pray I never lose sight of that magic.

It reminds me a little of part of the lyrics in Metallica’s For Whom The Bell Tolls:

I am not sure there is a more wonderful way to close your eyes the final time, looking up to the sky through the trees of the woods. Of course, let’s be honest here, if your final view is up at the sky through the trees, you probably have just gone through something pretty severe, such as a big fall; no one who is about to breath their last crawls into the woods to die so this probably isn’t quite the moment I painted for myself! The point is though, that the woods are filled with living magic. To stay rooted in the real world, to have one’s feet planted firmly on  the ground, I firmly believe one needs to get out into the woods as often as possible – at least occasionally for those not close to the woods. The roots of our humanity are there – home of our ancestors – and their life stories were left there, waiting to be found. And maybe just a little magic too, if you’re lucky!