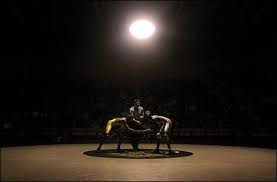 I am led, unintentionally by life events, to continue my last post on not being unbeatable but always being unstoppable. My two grandsons had their first ever wrestling matches at a local tournament. They have been wrestling for a couple of months now, but only against their teammates in practice; this was their first time wrestling kids they did not know, from other teams, other towns, in front of hundreds of people, complete with referees and scoring tables. It was quite intimidating to them.

We did not know this until we arrived, but the two boys would be wrestling at different times – one in the morning and the other in the afternoon, meaning the older one would have to wait over four hours before it was his time. But at this age the matches are quick: no longer than five minutes total over the three periods (assuming one is not pinned). They had three mats and wrestled two matches per mat and that kept things moving at a good speed and before we knew it the time had come for the younger one to head out to the mat. He was nervous – that was immediately apparent as he tentatively stepped onto the mat. Although we had discussed what would happen and what the rules were and what to expect, his nervousness and total lack of experience in anything like this basically settled a veil of bewilderment and uncertainty over him – I could see it in his face when the whistle blew, he had absolutely no idea what to expect.

As a wrestler, you can tell quite quickly what you are up against when you step on the mat; the stance, the grip in the handshake, a look in the eyes can tip you off as to whether your opponent is a formidable one or not. My boys are not there yet – they know little or nothing of reading your adversary before the match begins. But I know. And as I looked at his first opponent, I knew this would not be a gentle five minutes of rolling around on the mat like two cubs. My grandson had no idea what was coming.

Unlike my days at his age when there were no such things as youth wrestling clubs, they are plentiful now with pretty much every town having at least one. Kids start as early as age five, so different to my age of twelve when I began. By the time they are eight, some kids have been wrestling for three years whereas my grandson doesn’t even have three months. And they show it; they show it in their pacing around beforehand, in the aggressive stance they take as they prepare to start, in the way they shake their opponent’s hand, and in how they stalk and pursue their opponent, crouched like a wild animal preparing to strike.

Wrestling is an amazing sport. It requires great strength, incredible conditioning, lightning fast reflexes, speed, agility, flexibility, and coordination. At the same time it demands a strategic mind, cunning, calculating, and crafty. You need to know a wide variety of moves, when to employ them, and how to counter them when applied to you. You need to think many moves ahead, much like a chess match, planning your strategy to set up your final move to the ultimate goal – the pin. The sport requires an insane commitment to intense exercise and practice. It requires discipline and dedication to the training, the exercise, the practice, and to the diet.

Although not at this age, wrestlers “suck their weight” for the season. They are paired by weight class and there is a decided advantage to being able to get your weight down to the next lower class at the time of weighing in for the match or tournament. Let’s say you are normally 150 pounds; after a few weeks of intense exercise and practices, you will probably be down to 142 pounds or less. There are two classes: 145 pound or 138 pound. When you weigh in the day you will wrestle, your weight will determine which class you’ll be in. Wrestling at 145 and weighing 142 will place you at a disadvantage as most kids in that class will likely weigh in around 147 or more; you are allowed to be over the weight by three pounds. But at 142 you’d be too heavy for 138 given the three pound tolerance. But if you could suck your weight down a little – lose a pound or so – you could then wrestle in the 138 pound class. And you will have an advantage since by the time you wrestle several hours after weigh in, your weight will likely be back up around 145 pounds. It is just how wrestlers make themselves as competitive as possible.

Wrestling teaches self-control, discipline, and accountability. Unlike most other team sports, the wrestlers compete alone on the mat, one on one. You win or lose your individual match based solely on your own performance (which of course, also helps or hurts the overall team score). And you are the only thing for people to watch in high school wrestling as it is done one match at a time on a single mat; and that promotes great mental toughness.

My younger grandson went out wide eyed and nearly frozen like the proverbial deer in headlights and was down in seconds, victim to a blur of aggression and practiced confidence that was his opponent. However, he quickly shook off any surprise and bewilderment and got to the business of trying to do what he had been taught over the last couple of months. Ultimately, he lost – he was pinned. But it happened with him fighting and battling right to the bitter end. He was beaten but had not stopped trying, not stopped fighting. And I was tearfully as proud of him as a grandfather could be! He ended up wrestling two more times, losing on points after three hard fought periods in one match and getting pinned in the other. He ended up finishing 3rd out of four in his weight and age class and hereceived a medal.

My older grandson is ten and is deeply invested in proving himself, in not being embarrassed, and in desperately wanting to win – he is highly competitive and passionate about everything he does. Like all humans, he simultaneously thinks he is unbeatable yet is terrified that he is not good enough. Hormones are already doing their thing on his emotions and of them all, being male, testosterone leads the pack. He wants to compete, to test himself, to show off his physical prowess, and to roar. But he is also insecure, scared to fail, and has no idea if all the bravado in his heart will ultimately translate out to anything even close to being competitive with the others.

The wait was hard for him; he had trouble sleeping the night before and clearly had doubt and uncertainty on what to expect and getting there only to find out he and to sit and wait for four hours only served to amplify his nervousness. In fact his first match was probably closer to five hours after our morning arrival time and when it came, he was wound as tightly as a guitar string. As with his brother, he ended up losing his first match by being pinned. However it did not come easily to his opponent; he fought like a caged tiger the whole time, getting pinned with only 2 seconds left. He came back to the stands to where we were sitting and began to cry. Tears of sorrow and of frustration and of confusion; this was nothing like he had envisioned; all he knew was practice wrestling with his teammates and this was not that! This was all out warfare!!

He was better mentally prepared for his second match and came a lot more aggressively and forcefully. Wrestling is all about control and about imposing your will on your opponent and he did just that, He was leading very comfortable on points when he leveraged his opponent to his back and pinned him. The ref slapped the mat and blew the whistle and he stood up looking a little confused. The end of match routine is prescribed and time honored; both athletes are to shake each other’s hand, shake the referee’s hand, shake the hand of the opposing coach, and then remove the color ID anklet and place it back on the mat in the center circle. He remembered a couple of the steps but needed some gentle prodding from his coach to get through it all, so great were his emotions at that point.

He came towards me in the stands, eyes wide and joyous like a boy at Christmas. He found me and his smile stretched from ear to ear as he exclaimed to me, “I won! I won Papa, I won!!!” And then he hugged me and broke down into tears…tears of joy and of relief. The mantle of stress had been shed – he had won a match – he had passed the test and had proven he could win. He would not go home unvictorious, beaten by all his opponents and that was so important to him. And I remember that feeling and was instantly brought back to the taste of the relief from my first competitive win and my eyes filled too. It was a rite of passage – for both of us really, although far more so for him – and it was wonderful.

His brother is younger and wrestling is more of a lark to him; the hormones and tests of virility are far less important. The competitive fire is not fully lit in him as is in his older brother. But they both wrestled hard and they both gave their all; they brought it all and left nothing behind in reserve and I was so proud. They fought every second of every match and never stopped. And that is all I want for them – to be unstoppable.

There is a lot of downtime in a wrestling tournament, up to an hour between matches for each athlete, so I had time to watch a lot of matches and my greatest takeaway from seeing those boys and girls grappling on the mat was how so important it was to them. There were lots of tears; I would say form what I saw that someone cried after almost every match. The emotional stakes were that high for these kids and it mattered that much to them. And a huge part of that was in failing to win, but worse – doing so in front of their parents. Parental love and pride is viciously critical to children and they want so desperately to make mom and dad proud. And was thrilled to see how all the parents gave love and support to their kids after their matches – licked their wounds so to speak. It is not unique to wrestling of course – it is with all things in life for them. But with wrestling being such an intense and focused sport, those emotions are forcibly brought right to the surface. All in all it was an amazing day.

So please remember dear reader, to teach your children to represent themselves with integrity and pride, to treat others with dignity and respect, and to be stoppable. But also please never forget how crucially importantly your love, your support, and your pride in them is to them. Give to them as they gave on the mat – give it all and leave nothing on the table. They deserve all you have!!