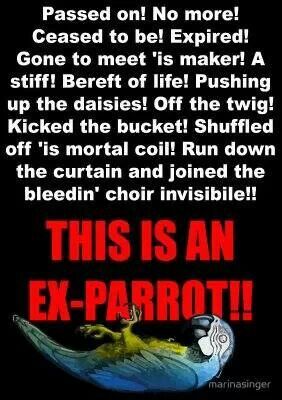 …..”my PC is all set” – or so I thought. Yeah, all set….right…it is little more than a 15″ paperweight right now. I had it running, sort of, for a while, but I kept getting intermittent freezing and hang ups. Then It got worse – really worse – to the point that I had to flash the bios. And it was all downhill from there. I ended up installing an older Windows 8 operating system and got it running for a day or so over the weekend but being an old OS it went out to grab all the missing Windows updates and it ended up hung during update 3 of 12. And it has never come back.

PC’s (or at least Windows PC’s) are often amusing with their cryptic messages that pop up, often requiring the user to frantically try to remember every word in the little box along with an obscure error code before the window closes, so you can go Google, and hopefully understand, what it was trying to tell you. And no matter the issue, they never, ever, make it out to be as bad as it is: messages such as “Your PC has experienced a minor issue and will restart in a moment. Please wait.” And while you are reading that message your PC is preparing a set of operating steps to find and diagnose the problem that will likely take longer than it would to get in your car and go buy a new computer. Well in this case, the message I got was “this will take a long time.” When Windows says a long time you know you are in for a marathon session.

After several hours of that, I ended up with a message that essentially stated that my hard drive was not sleeping, it was dead – stone cold, pushing up daisies, singing with the heavenly choir dead. There was no repair on this green earth that would recover it. I believe that Windows termed it an “unrecoverable error.”

And turns out it was,

I am technically on day 3 of still trying to get it at least partially functional, although it has not been a full time non-stop effort. I borrowed my old XPS14 from my grandson to whom I gave it when I bought the new XPS15; that is what I am using right now. It is running Windows 7 Professional quite nicely and it is still a stable and somewhat zippy machine. But of course, none of my stuff is on it. I cleaned it out thoroughly before giving it to him and got rid of all my old files. photos, music, games, etc. Basically gave him a clean slate with which to begin.

So I am really crippled here once again: having none of my pictures, music, or other files. And on top of that all my bookmarks and passwords are gone as well so every website I go to now requires a Google search, some thought on my user name, and a lot of effort to come up with the right password. (There has been a flurry of password reset emails in the last day or so!)

I create all I write for this blog in a MS Word document first, and then copy and paste it into the appropriate place on the blog administrative section on the website – I just find it easier that way and far easier to edit and modify than online. That massive document is also gone, so this is being done online and almost live, so please bear with any typos or poor sentence structure!

I am careful with my data and have not one, but two online backup services. I have already initiated the service request to have the full PC backup (all my files – all 750gb of them) loaded onto a USB external hard drive and shipped to me. I have also already ordered a new hard drive (which I had hoped to see today but according to the tracking is still somewhere between San Diego and here). My goal is to be back to normal by next Monday, meaning new hard rive in, Windows 10 installed, MS Office installed, and all my photos and music and files back in My Documents or My Downloads where they belong. It is a prodigious task but it is my goal – we’ll see how well I do.

But it does make posting difficult; I absolutely needed to at least get this announcement out to you all, and maybe I can cobble together another post later this week as well. I try to post two or three times a week when life is calm and at least once a week even when the chickens are on the ceiling. This current situation is far more the latter than the former, but I will do my best to get something with some substance posted……and I shall certainly get something out before Christmas!