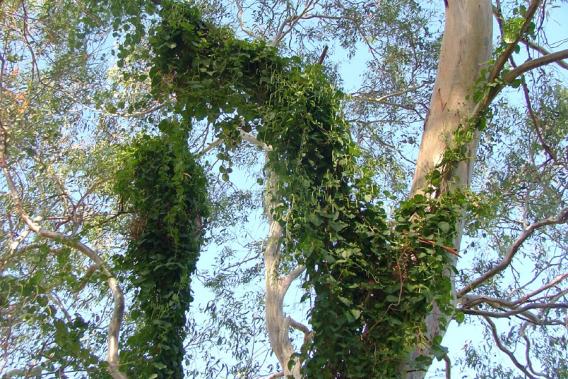 I was looking at a tree yesterday while out on a hike and I noticed the vine that had attached itself to the tree. Having spent a lot of time in the woods, I am familiar with the vine; it starts small and unobtrusive on the forest floor. After it begins sending out its runners, eventually it will catch a hold of a rough section of tree bark and begin its vertical journey up the tree trunk. It will develop other shoots and runners which also grab onto the trunk and fairly quickly, the vine and tree are inseparable in a tangled and interwoven embrace.

Years pass as they grow together, almost as one, both reaching for the sun, stretching to the sky.  The tree grows taller and thickens in girth and the vine follow suit. At the beginning the vine is barely thicker than a hair, wispy and willowy, best suited to be light and airy enough to be carried up onto tree trunk with a light breeze. But through time, the vine grows stronger, tightening its grip on the tree. It protects itself, just as the tree does, by getting strong and thick, attaching itself more firmly to the tree as it expands in width and length.

Throughout the years, the two coexist with no seeming interference to either one of the pair. The vine actually becomes almost homogeneous to the tree, so well ingrained into the bark that you can’t tell where one leaves off the other picks up. The vine runners now total five, or even ten, weaving their way up to their ultimate destinations – the top of the tree. They are now well over an inch wide, sometimes two inches, with thousands of hair-like filaments all attaching themselves to the tree bark creating a virtually unbreakable bond to the tree. So strong is the bond that you would probably have to remove the bark from the tree to break the vine loose.

But one day, there comes a tipping point. The tree grows at a slow and steady pace; it takes decades to add appreciably to the girth of an oak tree. But the vines are not so casual in their growth; they are voracious in their growth and expansion. And the bulk of their growth is at the tips of the multiple runners. They send out huge leaves in every direction, all designed to provide food to the ever growing plant. But by now, the growth and leaves of the vine have seriously outpaced that of the tree. And the vine begins to overgrow the tree’s canopy. And that canopy, of course, is the lifeblood of the tree.

Tree leaves begin to wither and die under the massive leaves and growth of the vine, with smaller branches in the tree dying altogether. Unfortunately, this just serves to provide more real estate to the vine, which quickly takes over any spaces recently vacated by the tree. You see where this is going dear reader, not a desirable outcome. And one day the balance of power is won by the vine and there is no longer adequate foliage to sustain the tree and it dies. The skeleton of trunk and branches left behind serve the vine well for some number of years; to the extent that a casual observer walking by might not even know that the green canopy above their head is actually all the vine’s leaves, draped on the bones of a dead tree.

And the inevitable eventually happens; the tree branches rot and deteriorate and begin to break and fall, taking sections of the vine with them. And on a particularly stormy night, with a precisely aimed and timed gust of wind, the tree splinters and breaks and the whole thing crashes to the ground, of course taking the vine with it. The vine ultimately overcame and destroyed the very foundation of its existence, essentially killing itself.

Symbiosis has three different types: initially the relationship actually begins as commensal where the vine benefits and the tree is neither helped nor harmed. The vine reaps all the benefits in this stage and tree is indifferent to the vine’s presence. A different type is mutual where both parties benefit and neither is harmed. While the advantage is overwhelmingly to the vine, the tree does reap some small benefit as the vine grows and thickens in that the vine protects the trunk to some extent by adding a layer over the bark, and the branches are afforded some additional strength in high winds by the vines wrapped around them. But the third and ugliest type of symbiosis is the parasitic, where the vine benefits to the harm and detriment of the host – the tree.

This is seen often throughout nature, where it all seems to be innocuous and harmless enough at first, species living and thriving in harmony. But fast forward just a few years and the invasive parasite has overcome and destroyed the host. The irony of it all is that the demise of the host eventually results in the demise of the parasite. And to me, this was two lessons in one; first and foremost, even Mother Nature gets it wrong sometimes. Now before you grab your torches and pitchforks, please understand that is not a shot at Mother Nature – I have the deepest and utmost respect for nature and the grand plan. And certainly the vine killing its host may be part of that plan. But that is hard to see from my perspective; I see a mighty oak taken down too soon by a mere vine.

The other lesson for me is wrapped around life as a man – a father and a grandfather. It is my fervent belief that part of my job is to wrap myself around my children and grandchildren – my family – in order to strengthen them and fortify them. To prevent them from breaking while being lashed by strong winds or heavy snow; to shelter them from burning sunlight or frigid air; to hold them tightly and let them worry about nothing but growing stronger, taller, higher. To be their armor.

Much like the vine and oak, there has to be great care to not overcome and ultimately damage what I am so desperately trying to help. It is my duty to ensure I never turn the relationship from mutual or commensal to parasitic. I expect that the next time I walk this trail again and pass by this tree, that it may well be down on the ground in a pile of splinters and debris, or at least a part of it. When loving, embracing, and nurturing, we are unintentionally forging a relationship beyond what we may at first recognize, just as the vine seemed so harmless and innocent as it joined with the tree. I’ve written of it before and will continue to touch upon this in the future, but life is all about balance, and the balance of mutual benefit in a relationship must be maintained or you are going to end up harming that which you seek to nurture. The vine never started out to kill the oak; it had not ill intentions when it began its journey up the trunk; it was all innocent until the balance was tipped. A lesson for life.