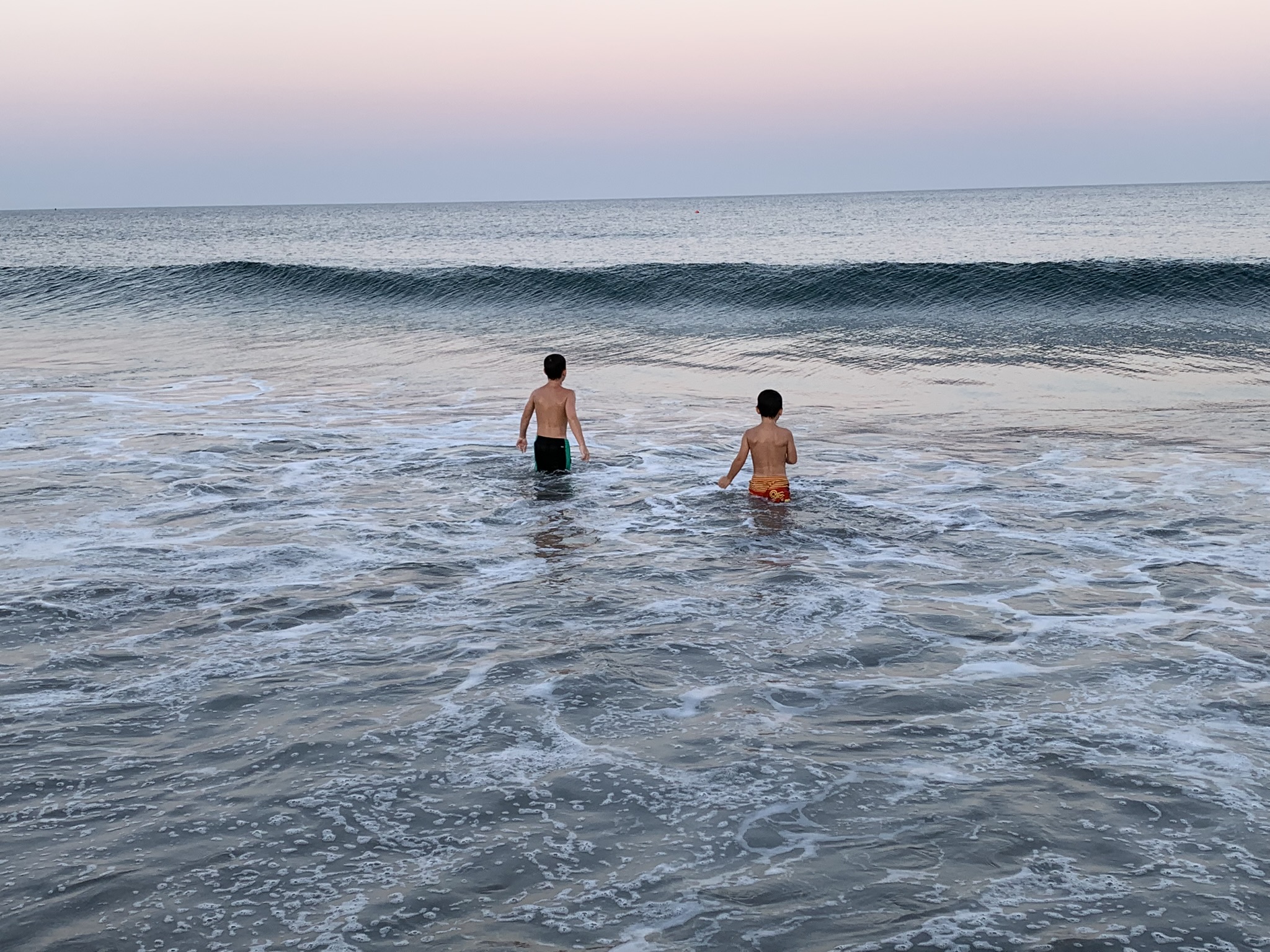 So. I learned a little something about myself the other day. See – I won’t say I spent my life being fearless, but I have always had a decent set of brass. I was never over the edge crazy, but I recall things like jumping my bike off a barn roof around 12 years old, running alongside a slow moving freight train and grabbing ahold of a handle and jumping on it around 14 years old, and it only escalated from there right up to my sky dive two years ago (which I did not consider fearless, but many friends of mine did). I am a reasonably intelligent man and I always weighed my risks and thought my way through before attempting something; I did not act stupidly, in other words, but I was certainly more brash or bold than many of my friends. But on this day, fear broke through from deep within me and coursed through my body, placing every nerve and muscle on full alert. What triggered it? I took my two grandsons to the beach to swim in the surf.

Laughing at me yet? I don’t blame you for a second dear reader…..I am laughing at myself, a little, right now.

I grew up on the sea, literally with homes in NJ and RI a scant 5 minute walk to the beach. Boats, rafts, beaches, etc. I spent unfathomable hours in and on the waters of the Atlantic. It has always brought me joy to see the water once again. But when we stepped onto that beach and I saw those big waves crashing on the shore, all I could think of was a wave grabbing one of the kids and dragging them under and off and not being able to find them. Horrific. I played for hours – literally – in the surf, heavier surf actually, as a kid their age and I doubt my father was even paying all that much attention. I took my son and daughter to the beach often, and once to the New Jersey shoreline where the surf is often insanely ferocious, and let them play in it while I sat on shore and watched. I’d go in with them and swim for a while, and then get out and leave them in the water, with nary a flicker of fear. But tonight? Almost frozen with the fear of what might happen, what could harm them.

I think a huge of the fear is as I’ve grown older, I’ve grown powerfully aware of how fragile our grip on life really is, and how quickly that link can be broken. And through the years, I’ve heard/read far too many stories of kids riding a wave one second and then lost the next. And each story leaves a mark and adds to the pile, the weight, on your soul of how it could so wrong so quickly. The ponderance of all those tragic tales begins to weigh on you as you age, and coupled with the ever-increasing realization of the tenuous grip we have on life, can result in an experience such as I had on this night.

Of course, when I go to the beach and I watch other swim and play, I do not have any such reaction; not even close. Because they are not my grandkids. Don’t get me wrong, I watch other kids when they swim because I am so aware of how easy it is to be pulled out and under. But not with the choking fear I felt with mine, because of course, they are mine. Closer to the heart as Rush might say. And that changes everything.

Certainly my own children were, and still are, precious to me – my son and my daughter are my pride and joy. But I had them when I was younger (of course) and hadn’t been alive long enough to really know better. I understood undertow and that people sometimes drown, but not my kids; not going to happen. I taught them to be safe in the water and I trusted in that and in them to keep themselves safe. But the older me sees every possible risk and considers each and every one of them as viable and valid. And that is what happened at the beach.

So I tried to look relaxed and calm and happy and never let them catch even the slightest glimpse of what I was feeling. I want them to respect the water, understand how to play safely in it, and how to stay out of difficulty, but to mostly to thoroughly enjoy it without being scared or influenced by my internal demons. But I watched them like a hawk, intently memorizing every head position just before the next wave arrived, calculating where they should reappear once they went under, and counting the heads as they popped up from the froth. Time after time, wave after wave. And they all popped up every time and allowed me to exhale for a moment before the next wave. To transfer my fears to them would be so wrong, so damaging to them. At the same time I desperately want them safe. Like so much else in life, it is all about balance, in this case balancing their fun against my fear.

The protection of our young is a relentless and powerful force in all parents. And as I have written in the past, there is a specific and precise reason that they place “grand” in front of “parent” (or mother or father of course). Not that we are better than parents, far from it; but we take the value, the importance, and the preciousness of our children to a whole different level. It’s frankly why we spoil them (well, that and because we can!). But as having trudged, strolled, toiled, danced, or glided through life for all these years, we have accumulated some varying degrees of truth and facts, sprinkled with a modicum of wisdom and experience. We know things.

It is the embedded in the grand scheme of the universe that grandparents pass along their wisdom, experience, and history. It is how families maintain the thread of continuity of who they are and from where they came. And along with that we need to pass to them our morals, beliefs, tenets, and values. It is not up to us to impose them upon them – that needs to be their choice to decide upon which to embrace, which to modify, and which to discard. But we need to expose them to our belief system so that our youth can examine and evaluate for themselves.

Unfortunately we’ve also picked up our share (or more in some cases) of fears; some well-founded and some unfounded. And those must stay with us and not be passed along. Of all we pass along to our loved ones, fear must remain sheltered within yourself. They will, without a doubt, pick up their own fears as they move through life; they’ll pick up plenty of their own – they do not need ours as well. And so I stood on that beach, biting my lip with every wave and laughing and shouting encouragement to them as they disappeared and then popped up several seconds later. It is how it need to be, it is how it is supposed to be.