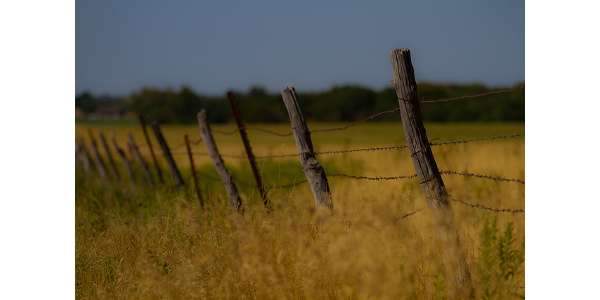 I’ve spent the last three days clearing brush (mostly bull briars) and doing little else but that. The thickets (although to me, thickets is so not the right word as it implies something nice and appealing, which briars most decidedly are not) of briars are typically 3’ to 4’ high, interwoven like a bowl of spaghetti leaving it impossible to discern where one leaves off and the next begins. The thorns on briars reach out and snag your clothes and skin effortlessly, and the sudden involuntary movement you make to free yourself invariably leads to being snagged by a neighboring vine and thorns. And having been there, seemingly since the last time Lucifer strolled the earth and left these henchmen of his behind, they have sent out tentacles into the trees and adjacent vegetation, often up to 25’ or more, making pulling them free a challenge, assuming one was able to get an arm and hand deeply enough into the bramble to cut the root stem.

But the bull briars? Regular briars pale in comparison to bull briars; they are briars on steroids. Massive, fast growing, with needle-sharp thorns up to ½” long. While briars snag you, bull briars rip and tear. At the end of the day, I have to take off my sneakers and use pliers to pull the thorns that I stepped on and embedded themselves in the soles of the shoes. Crazy bad!! But it is worth it all, to now finally have the time to reclaim my land; actually just claim it as I am setting foot in areas I have never stepped before in the 25 years or so that we have owned the land.

As I have written before, the lot is wedge shaped, terminating at a point in the back of the woods, so the bulk of the land is up on the street frontage, which may help explain why I was not terribly put out by not having easy access or use to a part of the land – it was the minority of the property. But the recently cleared area upon which I planted the cornfield demonstrated the worth of the unused land. And that has driven me to clear more. But bear in mind that the two neighboring lots intersect at the tip of the wedge so the deeper you go, the closer to the point, the closer the two adjacent lots become on either side. So privacy is a consideration – both ways.

Allow me to explain: New Englanders are known as a bit unfriendly – an undeserved reputation as we are an extremely friendly bunch – but we do treasure our privacy. This is true of us and especially the neighbor on the other side of the stone wall. He owns a large piece of land, what I consider a double lot, probably several acres. His house and “living” space is back from the road, almost even with the point where my other property line intersects the stone wall. The rest of the land going out to the road is generally cleared but still with a fair amount of trees, but is dominated by a large pond. From my yard, up by the house, I can’t see his house except in the winter when the leaves are gone, and even then mostly just glimpses. But what we do mostly see is the pond – which is wonderful for us! They are from Japan, over here for a local business owned there. I’ve met him only once in all these years, genuinely a polite and gracious individual. But having met him only once is telling of his preference for privacy; a New Englander from Japan if you will!

I have been to the tip several times through the years, the first couple of times searching for the point of intersection; the way there has always been thick with the aforementioned briars interposed with blueberry bushes, poison ivy, and other vines and bushes. I had “carved” a sort of path and it basically stayed through the years. The deer use it and now that he is old enough, my eldest grandson uses it on occasion when he needs a little time alone.

Several years ago we decided we needed to put up a fence between our land and the other neighbor, mostly because there was absolutely no clear line of demarcation and neither of us knew who owned what. There was a 40-50’ strip of rocky, overgrown, occasionally wet, and impossible to navigate land between his driveway and what I knew was my land. Ultimately what drove the point home was he had a tenet in the house who kept exercising eminent domain and creeping closer and closer to what I knew was my land until one day I came home to find he had cut down a tree and set up a grill and fire pit on my land. He and his friends were all set up – on my property – drinking beer and living large. So I went out and told him he was on my land and had to go, which he did, apologizing all the while. But that was enough for me. I hired a surveyor and had the line established, and then had a fence installed the entire length. I had always assume the line was roughly in the middle of the no man’s zone between us, but was shocked to find the line was actually almost immediate to the edge of his driveway – we had far more land that I had ever known. Once I knew this, I had to go speak to the neighbor (the one who actually owned the property, not the tenet of course) and let him know that the property line was established and that a lot of the construction material and assorted stuff he stored along the edge of the driveway was actually on my land and he needed to move it so I could install the fences – which he did.

As part of the survey, they of course had to find and mark the point on the stone wall where the other leg of the triangle intersected. And when they did so, they brought me out to see it. It was so close to standing in the neighbor’s side yard that it actually felt intrusive. Knowing how important his privacy was to him, I felt like badly encroaching on him, even though I was on my land. And at that actual point of intersection, my land consists of a whole few square inches!! So there has never been any real point (pardon the pun) to go back there for all these years.

But yesterday, I did. I cleared a lot of new land several hundred feet from the tip and as I stopped to wipe off some blood and sweat, I pondered what to do with the final portion. On the fenced side is the garage of the neighbor, which is nothing much to look at, and the other is the front yard and then house of the other neighbor. And it occurred to me that there probably wasn’t too many useful things I could do with the land. As much as I have every right to do whatever I wish on my own land, I found myself hesitant to clear it, just for the point of clearing it with no use intended. While he never came out, I am sure he has been periodically peering from his windows as I forged my way deeper and deeper into the land and closer and closer to his house and his privacy.

For now at least, I’ve decided to leave that last piece of land alone – uncleared. However I did carve a decently wide path through to the pinnacle point of intersection. Right at that point there is a massive oak tree, probably five feet across at the base, and it is on my land. And I want to be able to see it from time to time, and for my grandson to be able to go see it as well. When I had the fence installed, I intentionally left it 10-15’ short of the stone wall; it just seemed pointless and overbearing to run it to the stone wall; it is clear enough where they will intersect, so I left the area by the wall and the tree alone. After all, the fence was more about providing a permanent visual line of demarcation between the two lots than an effort to enclose the land with a perimeter boundary to keep people out.

The point of all this is really more about neighbors than bull briars and their insidious thorns. It is about having rights to what belongs to you while trying to balance that with your neighbor’s feelings and needs – about coexisting. Far too often these days it becomes about individual rights than about community needs. I am not touting myself as a saint by what I did, but what good what it have served me to clear my land to that final few square inches? To what end? (Pun again, intentional.) Just because I can? Knowing all the while that I was a scant 15’ from his house, from his private and secluded deck? To me there was no question. And frankly I enjoy my privacy as well, so it wouldn’t have particularly served me either. And that is about compromise – unsolicited compromise. He never said a word to me, never even made an appearance. But I chose to respect his needs about my right to just clear cut the whole section.  And without ever talking about it, I have no doubt but that he would have done the same for me. Because that is part of being a responsible adult, part of being a member of society, part of being a good neighbor…it is part of coexisting. And it is a lesson I would give my eye tooth to teach to today’s society. Because it applies to neighbors, it applies to other drivers in traffic, it applies to the stranger with 4 items that you let go in front of you at the register because you have a wagon full of items, and it applies to life overall. I know this was a long and convoluted path to the message (yes dear reader, pun intended once again!) but I hope you stayed with me to reach it. There is little more we can do to promulgate the message than to live it, to the best of our abilities, every day. Teaching is best done by example.