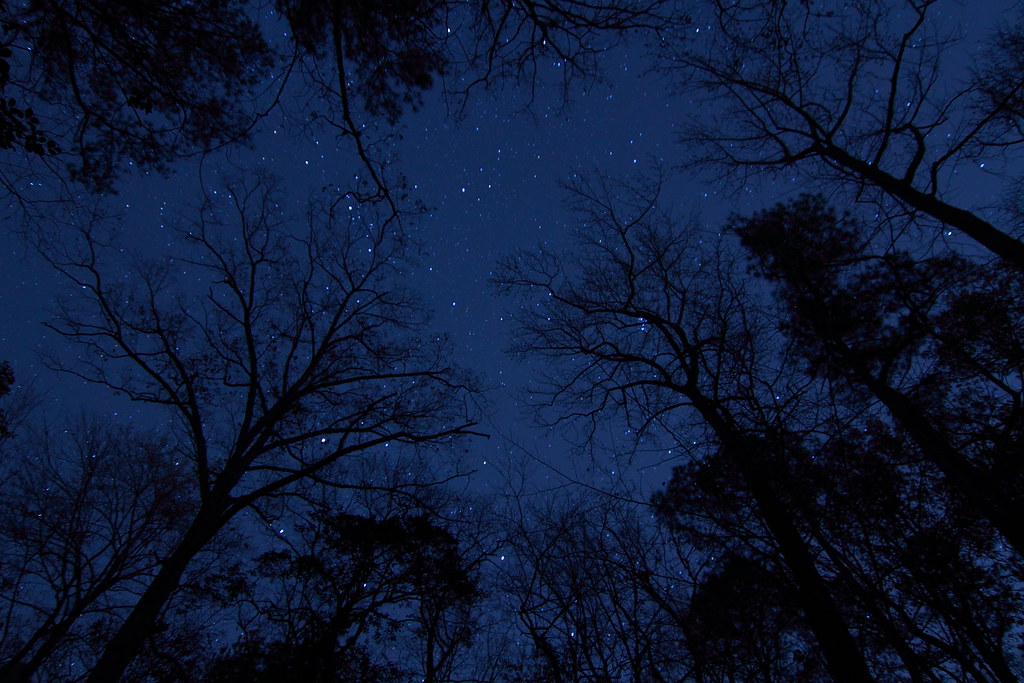 Upholding a somewhat new, but increasingly important tradition, my two grandsons and I slept outside in the back of the truck, under the stars. Now in our third year of doing this, the bed of the pick-up has apparently shrunk as it was far tighter than I recall from last year! None the less we managed and I was able to watch my two little cubs fall asleep next to me as the stars and moon bathed us in the mystical light that belongs to the night.

I need some decent amount of room to roll over and move my legs when I sleep and this set up afforded none of that, so I had a lot of time to reflect and think – a lot of time! The trees, more shadow than reality, gently moved in the occasional breeze that wafted through. They moved in shadow more as a collective group of organisms than single entities, such as a school of fish or a swarm of birds.  There was on unplanned, unrehearsed synchronicity to it. And as I watched I thought about human nature and how we, as a society, move and react throughout the daily swirls and eddies of life.

Certainly, for a variety of reasons, we humans “flow” for the most part. Much more readily observable in the city, witness the flow of people as they navigate the sidewalks and crosswalks; there is a decided rhythm to their movement. Of course that is predicated on laws, rules, and traffic lights. But we do all move at least somewhat in a collective unison. And when something happens – be that tragic or comedic, shocking or delightful – we all react similarly, at least to a degree. Enough so that reactions were almost predictable beforehand; a keen observer of human nature could map out how people would behave given a certain scenario before it even occurred. For example the sudden appearance of a baby panda in zoo pen will almost invariably result in oohs and ahhs from the crowd. A sudden eruption of a geyser or a sudden violent lightning strike will result in screams of panic and awe; you can safely predict that almost no one will giggle at these moments.

But this is not always the case. An event of pure terror can elicit quite unpredictable and opposite behaviors from people. I’ve seen it, I’ve been a part of it. Most run away. But some run towards. There is a litany of reasons for this; duty, obligation, a desire to help. I was once responsible for keeping an extremely large defense facility operational. Part of that was the electrical distribution system which entailed more energy than many small towns. One day we had a massive 12,000-volt failure, which caused an explosion and then a fire. It was one of seven transformers in the massive building. I passed hundreds of workers running out while I was running in; it was my job. Firefighters are prime examples – they run into the burning building while everyone else flees. Certainly it is their job – it’s what they are expected to do – why they get paid. But the emotions that drive such a behavior were present long before they became firefighters. There is surely an adrenaline rush involved – I know I was an adrenaline junkie. But it is more than that; there is a sense of what’s right, what needs to be done, a desire to “handle it”.

And there are other instances where people do not collectively flow alike in unison as a behavioral reaction; grief is another where the bell curve again applies with the majority squarely in the middle under the curve but with outliers who do fit the model. These are the folks who laugh at great sadness or tragedy – a completely unexpected reaction for most of us. There are those who have little compassion and will not let a person into a line of traffic from a gas station or side road even though traffic is not moving, while others will let the other driver get out in front of them. So there are variances in how we flow as a collective and I am not trying to imply otherwise.

But what I do contend is that we, as a society, generally follow similar paths through life; this without regard to social station, economic class, race, or religion. But across those filters I just listed are thousands of reasons this should not be so. To me it infers that this is nature, not nurture. There are predispositions in all; people are contiguous through generations and are somewhat predictable.

As much as we all want try to stand apart and declare/display our differences from “all the others”, we are oh so much the same overall. Yet despite the like tendencies of us humans, our patience and tolerance for each other’s actions, thoughts, and beliefs have a wider chasm now than I recall in my lifetime. Surely you can see the irony in this dear reader?!?  But why???

I profess that I am as bewildered by this as most anything on this planet. The last half century has brought massive change to how people perceive, and interact, with each other, but especially so in the last ten years, give or take. And while I have studied a fair amount of history through my years, I am not aware of another time or place in our timeline wherever humanity was so splintered. Yes, yes, yes I do recall the World Wars, but they were global and political, with people serving more as pawns in the conflict than active participants or agents of change. I think the Civil War that so divided us is a much better example of a rift in the lives of all Americans that certainly burned bright and ferociously in the hearts of most everyone involved. But I am not fully certain that there was such acrimony in every facet of daily life. As divided as people were on the issues that drove us to war, the overall conflict itself was driven and led by politicians, generals, and armies.

Today it is not about slavery or land control, it is about individual rights, a seemingly commendable cause worthy of our effort and attention. But how does a society honor, uphold, and respect the complete rights of every individual? Because in order to do so, you will invariably step on the rights of others. And what’s worse, when someone disagrees with someone’s assertion that their right is the “right” right, there is rage and venom – hatred. Just because we differ in opinion does not mean we are mortal enemies. It’s like humans have all become one giant nerve!

But that is exactly what we are trying to do; rather than considering and evaluating issues within the context of society, today we are doing it at the individual level, which of course can never succeed! There will always be winners and losers in life, such the same with siding on hot button issues. Some people scream to the heavens that every life matters and unborn babies have the right to live; that no one has the right to take that life away. And of course other people scream equally as loudly that it is their body and no one has the right to tell them what they can do to their body or legislate how they care for it. If you can step back and observe the issue, the arguments, objectively and dispassionately you can easily see their both sides of it. Ultimately, where you end up personally is how your heart and mind guide you. But you can’t render a complete and informed decision without understanding each side to the absolute best of your ability. And in the end, government and judicial actions will determine the course of action by law; agree or not, those decisions will be (hopefully) made with the best interest of our collective morals, needs, and justice. And there will be “winners” and there will be “losers” and one side will rejoice and the other despair. But if we all truly take the time to understand each other’s perspective, the joy will be subdued in deference to what the other side lost, and the agony of defeat will be tempered in what the other side gained. And so on with every issue that our current society has facing us.

Unfortunately, today’s society does not operate in this mode; people – not all but many – are dug into their side with no inkling, no desire, and seemingly no ability to even attempt to recognize that someone may have a different thought on the issue, never mind consider that opinion and allowing that to become part of their personal decision making information. Any stance contrary to their own is dismissed are wrong; not just judgmentally but condemningly with great venom and vile – hatred even. We have gone from an analog to a digital society; only two possibilities are the ends of the spectrum with nothing in between – right or wrong, yes or no, true or false with no tolerance for maybe or a little bit.

So what, you will likely ask. Thank you Captain Obvious, but what good does this information do me in my day to day life? Well, probably not a lot. No one is going to change how society thinks and behaves, not me and not you. And certainly not in a day or a week. But…..collectively, the more people that strive to incorporate rational and logical thought into their decisions, that have the ability and desire to understand the opposite side of the argument, that can objectively consider others’ opinions, the more we can begin to lead by example.

I’ve found often through my life that when I am faced with someone foaming at the mouth with contempt and hate for my position, when I take the time to explain my position they become more inflamed. But when I take the tine to listen to their thoughts – to actually listen and evaluate what they are saying – what they feel – that the venom and anger slowly dissipate. In the end I will make up my own mind, but there are times that they offer me facts or perspective in their argument that I had not previously considered. And while it may not change my mind completely, it may alter my feelings. So try hard to listen – objectively and without emotion. Try to understand what life experiences and events have led them to their position, their perspective.

And in the end, just understanding that there will be differences and conflicts over those differences in your life can help prepare you for when they occur. Not all armor is steel and not all weapons are lethal.