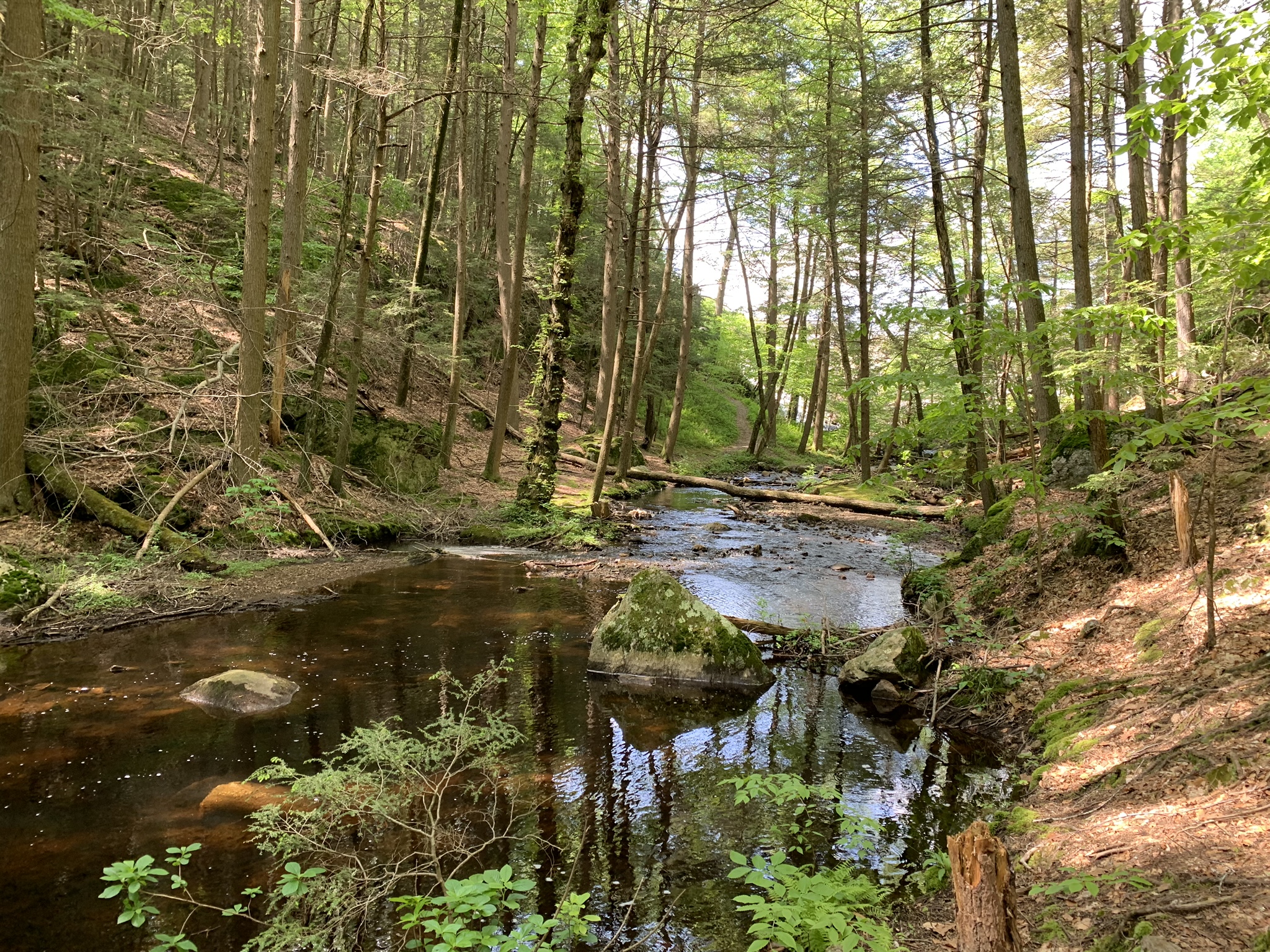 So I will remain consistent in drawing upon my time in the woods to discover my personal lessons in life, mostly because that is where I’ve been spending most all my time of late! Yesterday we went metal detecting (another of my retirement list items). But unlike many who head to a park or the beach to use their metal detector, I headed into the woods.

The history of Rhode Island is deep; it is not uncommon to find small cemeteries deep in the woods with markers going back to the 1700’s. And as you wander the woods you find scattered evidence of inhabitance there and now gone (as I recently wrote about in fact). And while finding dimes and quarters is relatively easy at the beach, it is not my goal; I want to find the artifacts from that time gone by. A 1790 large cent would be incredible but not realistic. I expect to find more utilitarian objects such as spoons or that sort of thing – on a rare day possibly a ring or bracelet.

It wasn’t too difficult to find a couple of potential areas; we had been hiking for a few weeks and had noted a number of areas of interest as we hiked. Understand dear reader, that any of these old houses are long gone and disintegrated and absorbed back into the forest floor. All that is left are the cellar holes. Rhode Island is extremely rocky; as the first inhabitants began to settle the land they had to contend with tens of thousands of rocks on and in the ground. As they worked the soil to farm they had to find something to do with all the rocks they pulled out of the ground. One of the most popular uses for all these rocks was to build walls; stone walls litter the land literally everywhere. You can be in the woods 10 miles from the nearest road or electricity and you will be hard pressed not to walk for more than 10 minutes without spotting a stone wall running through the forest. They cross and tee and run to and fro in all directions. It was a great solution to two different problems; how to mark the borders of your land and what to do with all those rocks. The beauty of them is more than the esthetics of their rustic charm that we enjoy even today; the real beauty is that being made of stone they are pretty much indestructible. The only enemy to a stone wall is really man. Certainly a tree fall here or there can knock down a section of a wall but that about it; as long as man doesn’t knock them down, they last almost forever. In fact, I am fortunate enough to have one bounding one side of my property and while it wasn’t a motivating factor in buying the property, I am delighted the wall came with it.

But the early settlers also used rocks in building their houses. They would typically dig a cellar hole and line it with rocks; this gave them a place for storing food through the winter as well as a nice solid foundation from which to build their houses. Had they used wood for their foundation, all that would be left now would be an ill-defined depression in the forest floor. The walls would fall in, the flora would fill in, and the site would quickly become unrecognizable. But the rocks persevere; they hold the shape and outline of the structure and even though the vegetation overgrows it all, the cellar hole and the rock walls are still very evident. So that was my objective – to find a couple of old cellar holes and metal detect around them. And I did. A quick note here; this post is not about the metal detecting, despite that I’ve spent all this time talking about it – I promise to get on topic shortly. I left the woods with two pennies more than I went in with, so not an entirely profitable day!! And not old pennies either: 1961 and 1981. They did not come from the cellar holes, they were on the logging roads we were walking to find the sites. I also found a bullet, still researching to determine the age but I don’t expect it is colonial era.

But to point now.

Our usual forays into the woods are down one or two dirt roads, typically old logging roads or fire roads, to the trailhead and then into the woods proper. But rather than picking a trail to look for cellar holes, we opted to drive the maze of dirt roads through the forest, looking for sites. Then in an area that looked favorable, we’d park and walk the road, popping in and out of the forest.

While driving (extremely slowly of course) we encountered a number of folks on horses and on bikes, as well as some number in cars/trucks. With only a rare exception, these “roads” are not wide enough to allow two vehicles to pass each other; one or the other should pull into the closest viable area to allow the other to pass by. There is no real protocol other than that – first who can, does. It’s unspoken but everyone knows it and everyone does it. And it works. Bicyclists are trickier as there is no space issues with them. Usually the driver of the vehicle will just slow down while they pass each other – if it is a particularly tight spot the vehicle should pull over to allow the bike more room.

Now horses are a whole different thing; being living animals horses can get spooked, become skitterish, or behave unpredictably around a car or truck. But this is not what I would call common knowledge amongst drivers and often they just proceed as with a bike: slow down and hug the right. So what the horse riders usually do when a vehicle approaches is to pull hard to their right and stop to allow the vehicle to go by, reassuring their horse the whole time. Knowing this though, when I see horse riders approaching, I pull over and stop to allow them to go by with minimal stress to the horse. And they greatly appreciate it.

We passed trucks while driving and had trucks go by while we were walking; the same with horses – both while driving and while walking. The sole bicyclist we encountered was while we on foot. And every encounter was friendly. Not just nod your head friendly but really nice and genuine waves in the case of passing vehicles to outright conversations about the day and the weather to the horse riders while we were in the truck as well as walking. And we had a prolonged conversation with the biker about the area and its history. You just don’t find that on a city street or in a mall. There is an almost implicit social bias towards open, friendly, polite, and warmhearted behavior in the woods.

Now, before the pitchforks come out, this is just an observation. And it is certainly not an indictment of cities or of malls! I just find that people are not on guard in the woods and not being on guard promotes a more open, friendlier encounter. I think, at great risk of being accused of making generalities, that folks who enjoy being out in the woods are more inclined to be friendly. But beyond that, I also think that the location induces a different behavior. Take someone who barely glances at you while passing you on a downtown street and place them on a trail in the woods and they’ll almost certainly smile and wave if not actually say good afternoon or hello. While some if it may be the people, it’s more the circumstance, the location, which provides the catalyst for the friendly interactions.

But I have to say that I still struggle with reconciling this; witness the recent murder on the Appalachian Trail. But that was truly aberrant behavior and a quick Google tells me that there have only been 10 murders on the Trail in the last 45 years. The counter to that is that the Trail is vastly unpopulated affording little opportunity for negative interactions. Yet I maintain that, at least in my experience, trail interactions are overwhelming positive. And sadly I can’t say the same for streets or malls. Certainly one can encounter poor behavior in the woods – I am not denying that. But my personal experience has been that social interactions exceedingly outweigh the negative ones. In fact, I am not at all sure that in the last 30 years I have passed a hiker or biker in the woods without at least a wave and a “hello”. And I can’t say that outside of the woods.

The why is what vexes me; do people change their persona, their behavior, when they go into the woods? Is it the abundance of oxygen? (Joking!) Or might it be some variant of the nurture/nature conundrum? I’ve written of it several times in the past and keep getting drawn back to it. Is there something innate, something……reverent…..about the woods that alters fundamental human interactions? Is there some string of amino acids in our genes that predisposes us to become more open, trusting, and friendly when in the shelter of the woods? Or conversely, are we somehow taught that the woods are a haven from the ills of society at large?

This ties into all sorts of alternate deeper spiritual possibilities than nurture/nature. There is also the question of reincarnation; if it exists it can surely go far in explaining why we are more friendly and accepting of each other in the woods. If we have previous lives in our souls, those lives have a high degree of probability of having been lived in the woods, and as such, make them a familiar and comfortable place to be. Home again so to speak.

There is also the vibration enigma, something I have also written of in the past. The thought is that there is music in all of us that is mostly unheard. But we all have it, we all emit it. And this music – the vibrations – can allow us to instantly like or dislike someone based upon the harmony of the two different frequencies of the vibrations. And it is entirely likely that if we all have this music, these vibrations, that all living things also have this. And if so, where would one be more lulled and loved into comfort and ease than in a forest where thousands of trees and plants are all singing to us? Consider the majesty of that orchestra! There is absolutely no negative or discordant tones or melodies anywhere to be heard; all soft, positive, uplifting, peaceful, and tranquil tones, intermittently enhanced by the songs of passing birds. Can there be a place more conducive to higher tier social behavior?

Regardless of the basis for my observation, I find the woods to be of comfort and joy. And never more so than in the summer. Certainly the autumn woods are lovely, the springtime woods are vibrant, and the winter woods are haunting in their stark beauty.  But the summer woods are intoxicating; lush, exotic, richly verdant, seductive, simultaneously erotically steamy and sensually cooling, deep with life, reverent and resplendent with their silence, and decidedly home….at least to me. I encourage you dear reader to find a trail in a forest near you and take a walk, take a pause, and take a breath of the majesty that is the forest air. And say hi to the folks you encounter!!