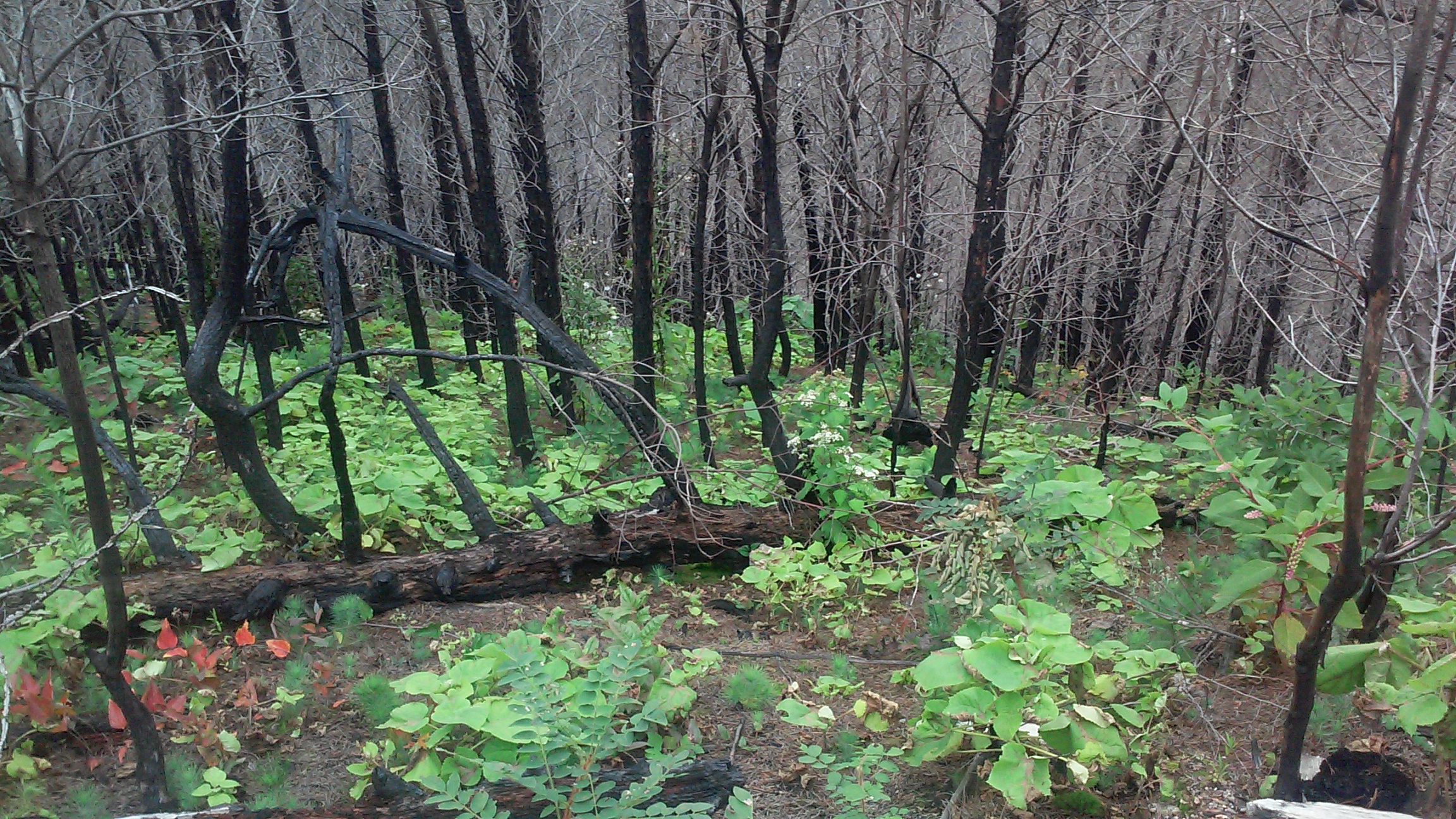 As I strolled through the forest yesterday on an easy and tranquil hike, I was struck by the devastation to the woods: denuded trees with their skeletal arms stabbing at the sunlight now streaming into areas that have been hushed and dark for eons. The Gypsy Moth – actually the caterpillar and not the moth – are waging all-out war on the trees of Rhode Island for the 4th year now.

At first it was the oaks, I personally lost at least twelve 100-yr old oaks in my yard – the deep woods lost thousands. There are acres that for decades have tossed their green canopies to and fro in the summer’s breezes that are now dead and barren. It is estimated that RI lost 25% of its hardwood population to them in the last 3 years. But there are vast areas that have few hardwoods, areas dominated by white pine and they too have been decimated. Unlike the multi-branched oaks which spread their limbs  in essentially a 360-degree sphere, the pines are more vertical and once eaten bare, their soft wood branches quickly break and drop leaving the pine stands looking more akin to rows of gigantic spikey spears than trees. They are born brittle but once dead they, rapidly become like twigs to even a gentle wind and quickly snap mid tree or higher creating a scene right out of a disaster film with a twisted jumble of huge toothpicks tossed all about. Very depressing to see huge swaths and parcels looking more like a hurricane or tornado had just gone through than a living forest.

But light is now streaming to areas where it had been a rare and intermittent visitor for the last 100 years and Mother Nature is taking full advantage. New growth is springing up everywhere; plants and flora alien to the once dark corners of the forest are taking root. Of course, sadly, this means that species previously suited for life under the cool dark canopy no longer have a viable home and are dying off: ferns, mosses, and lichen are all yielding to their new now-hostile environment. The forest is rebirthing itself as only nature can.

And this is how it is meant to be; how it is designed – part of the master-plan. I’ve seen countless trees down on the ground, broken from a storm or another tree falling on it, but not fully severed from its root system, and in time the limbs, once reaching out horizontally but now vertical, become the tree, rising up from the broken trunk like a Phoenix from the ashes but with green leaves instead of feathers. The new growth is resplendent in their new role of repopulating the forest. It stands bright and clean and crisp in the sunlight, shining as much from pride as the sun.

In five or ten years this will be a different forest once again; for countless years it was sheltered and dark and moist with every shade and hue of green imaginable. Now parts of it are almost monochromatic with shades of grey from dead trees and branches dominating the color spectrum. But as the new growth sorts itself out and the now new species find their place and will become the dominant vegetation in the newly opened sunny meadow amidst their darker still living tall neighbors. And in 20 years? A new forest will return. Perhaps the oaks or pines will reassert their dominance in most areas but other species may win out. No matter. The forest will not just survive, it will thrive.

And as I watch our society and see our old values and social morays fall one by one like the oaks and pines, I mourn their loss. Respect. Integrity. Honesty. Accountability. Responsibility. Altruism. People caring for people. All seem to be vanishing. Just as the forest is being torn apart. But as I read and observe the next generation – actually the next few (Gen X, Gen Y, Gen Z) – I see what I witnessed in the carnage of the forest yesterday. Society is rebirthing itself – as it is meant to do – as it is designed. Part of the Master Plan.

The ferns and mosses that flourished under the dark cool canopy are withering and dying in the new brilliant sunlight. Countless fauna have had to relocate their dens or nests or whatever they called home to retreat into other, untouched areas of the woods. They don’t like the change and in most cases can’t tolerate it. Change is hard. Impossible for some. And that is where many people today find themselves dear reader; wilting in the brilliant glare of change. But we are nothing if not adaptable. In fact we are at our best the more dire the moment. “May the worst of the moment reveal the best of the person.”

Society may be changing, evolving. And it can be hard. But there is new growth taking place that is destined to replace our old and dark canopies. The sunlight of change is shining brightly upon us and the new landscape will be different – there is no denying that. But we need to accept and embrace it. The youth of today is fully prepared and capable to take root and grow a wonderful new society. But until it is their time, I feel it my duty to at least offer advice, to teach whomever is willing to listen, to lead by example, all in order to facilitate their new roles, much as the remaining oaks in the woods provide whatever shelter they can to help ensure the survival of the new growth until it can stand on its own. Different is not always bad, certainly not necessarily worse; given time it often turns out to be an improvement. Give change a chance.