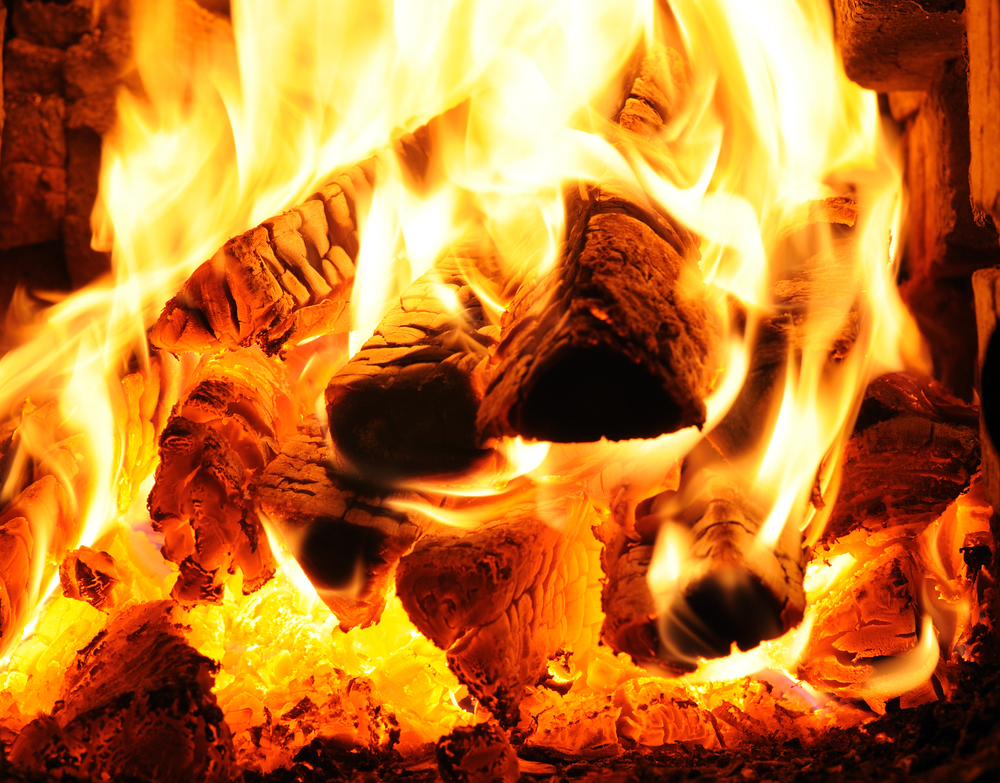 Fascinating conversation today. But first, a little background. We heat with oil and forced hot air. It is one of the quickest heating methods going – and the heat is uniform. We had it in the house in which I grew up, not that it had anything to do with the heat in this house now, but I still recall laying on the floor and curling up atop the supply registers as the heat came up on cold mornings. But I digress.

Oil heat is expensive, but so isn’t every method. And in the days when money was tight, oil was an expense I loathed as it was an impossibly large bill and was inescapable. So I got a wood stove, it was brand new – never fired – and a really good price, although I did have to cut down a few trees as part of the deal. But I had wood on our property and it was, at least for that first winter, almost free heat. I set it on the hearth, removed the damper, and snaked a stovepipe up through the smoke chamber, and called it a day. (Turns out that was not a good thing to do, but that for later.) The stove was incredible; crank it up and you’d end up having to open windows! But the wood was free and that meant the heat was free and I loved it.

There were downsides to it though: it was messy in almost every aspect. When it came into the house to be staged for burning I’d always leave bits of leaves, bits of bark, little odd pieces and chips of wood, and general woody debris. Always. And sometimes more – brought in plenty of insects, more than a handful of mice, and at least two snakes that I know of, maybe more. And of course burning made a mess as well. The smoke and the ash tended to cover the house as well. But like I said – free heat, so…….

I began buying wood as my supply on the property dwindled and as I got busier with life. Back then you could get a seasoned cut and split cord for around $140 and that could easily go half a winter or more if you were careful about how you burned; still a great deal but just as messy. And the ever present smoke persisted.

Then we got grandkids and we were terrified of them getting burnt on the stove so we stopped using it. Truth be told it was an easy decision as we were tired of the mess and the omnipresent smoke. So we stopped burning wood. Fast forward a couple of years and someone asked me about the stove so I gave it away; we weren’t using it so why not? Put the damper back in place and gained a whole bunch of hearth space.

We tried using the fireplace as a fireplace but always ended up getting too much smoke in the house and the fire never really burned well. So I researched it and found our problem was fireplace opening to flue size ration – our opening was too big for the flue. And in researching that I found that how I had installed the wood stove had created a similar issue and finally explained that damned smoke we always had with the stove.

So back to today. We are planning to burn wood again. This is concurrent to my retirement but not necessarily related. I think I mentioned previously that we lost 10-12 big old oaks in our yard to the Gypsy moths. I am having the three that are closest to the house taken to the ground by a contractor in the next couple of weeks. I think I could probably drop two of them where I want them to go, but not the third one. And even the two I think I could do are no guarantees. So I’m letting a pro do it – the wisdom of age! But all he is doing is getting them to the ground – I will clean them up, cut them up, and split them for burning through the summer. They are already seasoned now, standing dead for over a year now.

But I do not plan to burn in the fireplace – too inefficient – and I don’t really want a big stove on the hearth again, so we’re going with an insert. Inserts have pretty good efficiency (~77% or so they claim), they throw a lot of heat, they have the glass in the door to see the fire, and they don’t take up any hearth space. So a big win in my opinion. Yes – there will be that old familiar mess in the house with the woody debris; we’ll deal with it. And yes – I may bring in some critters once in a while but frankly, they come in whether you carry them in inside a log or just leave the door ajar for 5 minutes. They get in either way. But what about the smoke you are probably thinking? Let’s revisit two key concepts in this: that I did not install the first stove correctly and that wisdom comes with age. So I am hiring a pro to install it. The chimney needs a liner as I have a cracked tile, probably from a previous chimney fire I never knew about. So when I get the liner put in and the new cap put on, he’ll install the new insert the right way so that it won’t smoke up the house. An added benefit of all this is lower oil bills and a much, much higher exercise level. I find splitting wood a very Zen thing to do but let me tell you – it is crazy good exercise. An hour or two every day throughout the summer and fall will get me a couple of cords split and ready to burn. And with over seven dead oaks still standing, I can repeat the whole process for at least a few years more.

And the conversation? Way back at the start of this? It was at the stove store. I went in and was very specific about wanting a wood burning insert so that is where we went. But as we spoke, he asked me if I was sure I didn’t want a pellet stove. He said he usually starts “pushing” pellets much earlier in the conversation for people who’ve never burned wood, but since I told him I’ve always burned wood and so he didn’t bother. But generally he steers people to pellets almost immediately. Most of that is due to the ease of pellets: no real mess, just have them delivered and burn them. No real work – no splitting and stacking and seasoning.

And that’s when it got really interesting. He told me there is a shortage of firewood in Rhode Island; high demand and not enough supply. Not that there isn’t a huge amount of wood here, but there is a shortage of people cutting, splitting, seasoning, and selling it. Prices are through the roof – over $300 a cord so it has doubled in……maybe 10 years. And you can’t move firewood across state lines here – in or out – due to a bug: the Asian longhorn beetle. The threat is real and has changed how we handle our firewood now. But on top of that is the EPA; next year there are new more stringent requirements for wood burning devices and will significantly change the design and cost of stoves and inserts. Which will depress the market even further.

His store used to mount 10 wood burning inserts on the display wall along with maybe 4 pellets and a couple gas or hybrid inserts. Now he has 6 wood burning inserts and may be going down to 4 next year. His sales have clearly shown a decline in wood burning – at least in our state. Between the price and shortage of firewood, the cost of the stoves/inserts, and the storage/handling of the wood, people are moving away from wood. And the work – he always explains to customers who have never used wood the significant amount of work there is with wood. Even if you aren’t cutting and splitting your own. Assuming you just call and spend the $300 for a cord, it’ll be dumped in a pile in your driveway or yard. So you get to move it and stack it, piece by piece. Then you get to move it again when you want to burn it. And again when you clean out the stove or insert. A lot of work. Not that pellets aren’t work, but they come on a pallet and you carry in a bag or two until you need more. Work for sure, but better than wood. And never mind if you’re gathering your own wood – drop the tree, cut it up, move the logs to the splitting area, split it, stack it, then bring it in to burn. Labor intensive and people today aren’t so interested in that. Folks are more inclined to spend time doing things than cutting or splitting or stacking wood. Life has grown faster, and days fuller, and the inclination to invest all that time in wood labor has dwindled. In many ways it is a microcosm of society today. At work I often refer to instant pudding; everybody wants “it” now, whatever that may be. No one wants to wait.

So this shift away from wood burning is a whole lot more than a bug issue; or an emissions issue; or even a supply issue; it is a change in society. Humans have burned wood for heat for thousands of years. And while there are still some of us doing so, we are in the minority. So are stick shifts but that is another missive, another time! Until then, I will be spending my summer much as my forefathers did hundreds of years ago: cutting and splitting and preparing for the first snow of winter.