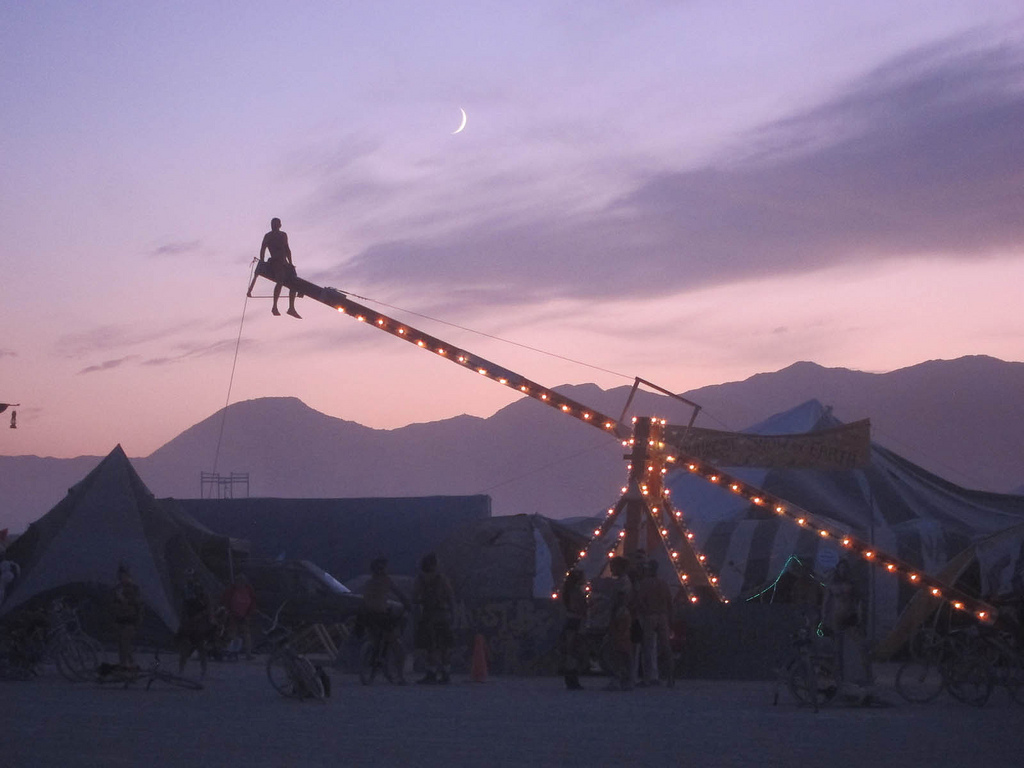 You know, dear reader, that I am a huge believer of, and advocate for, a balanced life. I have written of it often, the importance is great yet success is rare for many. And so life, nature, and/or divinity all step in to compensate; the beam is long and wide affording ample opportunity to move around upon it without having great effect on the overall system. And likewise the fulcrum is broad faced, also allowing great motional latitude by us, the force acting upon it.

My point is that we are gifted with great opportunity to move about on our personal balance beams without upsetting it tremendously. And that is good. But consider the other side of that: when there is such a forgiving and tolerating a lever and fulcrum, the greater the effort required to move it. And as such, the easier it is to reach a point in your life to be out of balance – and to remain there. With a long, broad, and wide balance system such as we are given, it can take great effort to change the balance of the system. And at first glance that presents a somewhat troubling and almost depressing picture of life, that it takes huge effort and motion to rebalance ourselves. But I don’t believe fully that……

Now this part will be a challenge for me to describe what I personally visualize with this particular balance system in each of our lives, but I will try. Retain the image I just described of a long beam, broad and wide, resting on a stout and wide fulcrum. And upon that beam we dance; we walk, we run, we sit, we jump, and we hop, skip, and jump. We move all about and if we get very close to the end of the beam and when we are able to apply sufficient force far enough out on the beam, we move it a lot. Easy enough an image I think. But let’s now picture that beam as a rows and rows of smaller balance beams, each capable of being easily moved up or down with the slightest of effort. And each beam that is moved downwards towards the fulcrum, the easier it becomes to move the big beam. So conceptually, the more of the smaller, easy to move, beams you move, the easier it becomes to move the big beam – to change the overall system.

Sometimes we are so far out of balance – so far at one end of the beam – that it takes a monumental, even Herculean, effort to restore your balance. My idea is that if you make enough smaller, incremental changes, you can more readily effect a bigger change in the balance of your life.

I, personally, am at the far end of my beam; at least in one aspect of my life. I’ve worked since I was 18 (actually began caddying at age 12 or so and then 4 or 5 years on a sport fishing boat after that). And when I began working, I had balance. But life happened: marriage, children, home, college, etc. And so I worked more, a lot more. I recall months of working 7 days a week, sometimes 10 or 12 hour shifts. The more the better. And time lumbered along in its inexorable fashion and my roles and responsibilities grew. As a superintendent, the days were long and the weeks were essentially endless. But then along came technology; pagers and then cell phones – building control systems – all electronic leashes that increasingly tethered me to my work 24 hours a day; the computer would send alarms, wake me up, and I’d end up going into work at 2 or 3am. The phone would ring at midnight and off I would go. I grew to manager and life became filled with problems that would consume me around the clock. I traveled farther and farther out to the end of my beam. And I lost balance.

I’ve tried through the years to move back towards the fulcrum but kept sliding back to the end of the beam. So I adopted the multiple smaller beam idea and that helped a little; it provided some gains. And as with all things in life, change in one thing changes everything else. So as my spectacular first grandson arrived, it helped give me balance. And then the second spectacular grandson arrived and provided me with more balance. And when the magical little granddaughter arrived it gave me even more. But not enough.

My current number is 76; I have 76 days left until I retire, until I again gain balance in my life. Of course, that unto itself may not provide enough to offset almost 45 years of steady employment, but it will surely shorten one end of the beam and move the fulcrum to a different place, all of which will change my whole balance system. And hopefully I can then begin to make up for those 45 years of not being a full-time member in my personal life.

But what to do? Therein lies the dragon to slay. The devil is in the details, the minutia. My current week runs around 60 hours in the facility and consumes around another 10 or so every week with emails, calls, and texts from work that require my attention. Much of it is rather stressful; I guess most of it is in truth. So how to offset all that once I stop? How do I keep the beam from suddenly and forcefully slamming down on the other side? Remember when you were seemingly 100’ up in the air on the end of the beam and the other person jumped off? That fall, that impact, that tumble? I don’t want the real life version of that.

So I am scrambling to make my plan. I have months and months of heavy yardwork I want to do in the back woods. I want to hike again, at least 3 or 4 days every week. Not walk, but hike. And not 2 or 3 miles but 8 or 10 miles. I want to spend hours wandering through the woods and forests, quiet with nature. I want to ride my bike too – trails and bike paths – at least to some extent. I want to get deeply back into amateur archaeology again; it’s been over 30 years since I’ve done much at all in that field. And I plan to get a metal detector and hunt for buried history. Not Oak Island treasure of course, but all those hundreds of years of dropped and lost items still in the ground. Those things won’t fully replace the massive hole in my life that retiring will create, but they are a damned fine start. I may, at some point, consider doing “something” again. I’ve already been asked to consider returning to work as a consultant, which I will consider…..down the road a bit. But I don’t want to get wrapped around that axle again, so I am not really sure. There are other irons in the fire that involve the business I’ve been engaged in all these years, but I have the same concerns.

Always strive to remain aware of you own balance dear reader; assess and recognize where the two ends of your personal beam are and how balanced you truly are. Take lots of little steps, or several major steps (or one gigantic step as I am about to take), but do what you have to in order to maintain your balance.