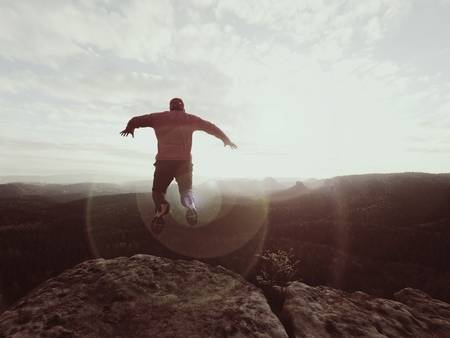 I’ve recently had to deal with an individual who had been visibly sullen, angry, and upset for a number of days. When I finally dragged it out of him, it turned out he had seen me across the shop a week ago, talking to someone and pointing at him and laughing. I was incredulous; I did recall the day of the conversation to which he had referred, but for the life of me, could not recall even noticing this individual during that moment. What I did recall was looking out an open overhead door at the sky while I was talking. Apparently this person had been walking past the door while I was staring out it. As to the laughing – work is hard; work is very hard. And I try my damnest to make it as fun and enjoyable as I can for everyone. It’s purely a question of making it as pleasant an atmosphere as possible, given the stress and daily angst.

So his perception was that I was looking at him and laughing at him to fellow employee when in fact, he was never a part of that moment. Yet it ruined his day and his week. It carried into his home life. It affected his performance and his sense of well-being. He lost his balance and fell into an abyss of self-pity and sorrow. For – no – reason. There was nothing there, at all, yet his perception of that moment threw him into internal emotional chaos.

He assumed, he knew what was going on. He took the data available to him at the moment, which was purely visual with no audible confirmation, added in some of his own internal fears and inadequacies, and drew an erroneous conclusion. And then acted upon it.

This is a danger we all face daily in our lives; assumptions, misunderstandings, and decisions based upon incomplete facts all color our perception and can lead us to dangerously wrong conclusions. Had I not perceived his extreme discomfort, our relationship could well have been irrevocably damaged for the rest of our time together. And depending upon how deeply he was hurt, and how tenacious his memory was, he could have used that to not only decline to help me when needed, but possibly hurt me out of spite.

Certainly words can hurt us, if we give them that power – allow them to. Words can absolutely be powerful, but with our permission. I try as hard as I can to arm, to load, the words in my blog with power in hopes of reaching at least one of my dear readers and touching them in a helpful and nurturing way. But certainly my words are just that to most – mere words. Those people are not in need of the words and give them no power; they either fast forward, move on, or completely dismiss the words and thoughts. It’s easy, we all do it all the time.

A possibly touchy topic to some, but take the flat earth “debate”; I can find absolutely zero credibility in the idea that the earth is flat. I just can’t grasp it; it is in complete contradiction to everything I think I know about physics, science, and our world. I’ve seen the curvature from airplanes and I’ve watched ships in the ocean disappear from my view before upper structure and masts did. So when I come across those words that offer the other opinion and try to change my belief, I give them no power and I simply move on.

But when I encounter words people intend to be hurtful to me, moving on is far more difficult. The truth is that the natural proclivity for most people is to hungrily reach out, grab those words, and wallow in them, feeling all the pain over and over. We think, we ponder, we reflect on them, over and over, all the while stinging from the power we’ve provided to them. Were we only able to let those words pass through us and continue on into the universe, life would be so much simpler.

Certainly as Socrates said, the unexamined life is not worth living. We absolutely need to take all available data, input, into consideration for evaluation and examination tin an attempt to discern if there is an opportunity for personal growth. And we must do so, to some extent, with hurtful words for there may be a modicum of truth in them. But it is a one-pass and pass deal; we consider them, weight them, and adjust if we so choose. But then we have to dismiss them. And surely, those words clearly flung towards us purely to hurt and cripple us are to be passed through immediately. Again, easy to say, hard to do.

But this is all about personal encounters. What sent my associate into orbit was 100% perception based upon visual cues. There were no words, there was no intent, because there was no connection between what I was doing and what he was perceiving. We have to be ever so cautious in our daily interactions not to allow what we think is going on to become the reality of what is going on. We have to always consider all possible scenarios and dismiss the unlikely. If the remaining alternative still holds power over you; you fear the worst and can’t eliminate that, go ask. Go talk to the person and use words to remove the visual filters to more clearly understand what is really going on. But please dear reader, never jump blindly to a conclusion.