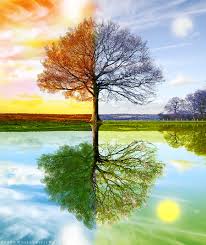 The cycles of the seasons are readily apparent to most of us; some see it more and some less depending upon their geographical location, but we all see it. Up here in New England it is remarkably pronounced, but never predictable. Sometimes the impending season hints, hems, and haws before shyly sliding in. Other times it explodes upon us, literally erupting seemingly out of nowhere.

Life is much the same, as we transition through it. While it definitely does not work so simplistically, as we often do, consider it in blocks of ten. Our 20’s are full of self-discovery, self-fulfillment, and self-satisfaction; we can’t typically see much more than ourselves and we revel in ourselves and our freedom and youth. And so on through each successive block of ten (more or less) as we (hopefully) grow and mature. We amass wisdom, friends, and loss – all inevitabilities of aging for most. But the changes through to, and even part of, our 50’s are mostly emotional and spiritual. We grow in compassion, understanding, acceptance, and altruism. Our capacity to love deepens, our ability to forgive expands. We become more than the bodies we so easily play within. I was (give or take) as fit in my mid-50’s as in my 30’s……sure, I had lost a step or two, but I could run, climb, and jump as freely as ever.

But like the seasons explosively changed with our waking one morning, so does age suddenly “catch up” with you. It is astounding how our bodies change. Granted, some folks can fend it off for awhile, some for quite some time. But like the darkness of night slipping in behind the sunset, the time will come. Physical acts that you did without so much as a thought for your entire life, now challenge you to your core. Think about that!!! There are countless personal examples I can offer. For longer than I can remember, literally, I’d been able to get from flat on the ground to my feet with a flip, a jump, a hop, a tuck, roll, and leap. Now I need to break out a calculator to figure the best angle at which to approach a rising! OK – some hyperbole perhaps, but you get the idea…..And running? I’ve always run as easily as I breathed. Now you need some fairly creative adjectives to be able to describe it as “running”!!

Yes dear reader, of course I know that loss is inevitable; if you’ve read my scribblings, you know I have written of it already. The loss is not the point of this rambling; it is the suddenness that has me caught so off guard. It is very much like a switch has been flipped; some large and ethereal hand has reached down and thrown some lever removing what has been a part of me for so long. Oh it could be far worse, of course I know that; I am still quite fit for a “man my age” <grimace>. The level of fitness, the magnitude of loss, is not the point. Loss is not linear and like the seasons, is not predictable.

But even that is not the whole point of this missive. Every equation in this universe balances. Mathematical, electrical, chemical……all of them. There is pure and undeniable balance in the laws of physics. The laws of conservation of mass, of energy, of momentum, and of matter; they all ultimately balance. The lesson today dear reader, is that this very fact applies to everything!!!! I can’t run as fast or far as I used to; I can’t lift as much weight as I used to; I can’t climb a tree as fast or high as I used to (OK, the high part is really wisdom J); and I can’t wrestle with the woods in the heat as long as I used to. But that is only one side of the equation. With loss comes gain. IT HAS TO!!! Reconsider those laws of conservation please; reflect on them. We simply can’t lose something without gaining something else somewhere else. That’s just how it works! The beauty of this simple yet elegant concept is critical to each our eventual transitions through our respective “blocks of 10”.

We suffer loss. But those losses will be paid back to us – in equal value – as we continue through life. For me, there is a new introspective component to my soul. There is reflection and learning on perspective and perception and on how they touch every part of each of lives and how they alter world events. Of course, to be honest there are other things I still struggle with such as patience behind the wheel, but that is probably not a loss but a lifelong deficit; perhaps I shall someday loss that and have it replaced with something more noble!

This then is today’s lesson of life I have discovered. I think the hard part is reconciling the loss with whatever gift replaced it; finding it, recognizing it, valuing it. Let go of the loss, no matter how violently it burst into your life, and go seek the gift life provided you to replace it.