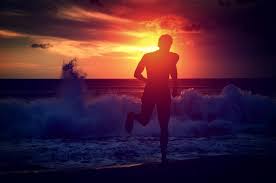 I was a runner for most all of my life, I ran for fun, sport, and then in later years also for fitness. One of my greatest joys as a kid was to just run in the woods – no paths, no trails – just run…..run and jump and hurdle and duck and dodge and go until the forest grabbed me and threw me to the ground. Or to run downhill until my legs couldn’t keep up and I’d tumble and roll to the bottom. I was born blessed with a unique mix of muscles in my legs – long and lanky and great for running long distances – but at the same time I had the ability to generate great speed in a sprint. And I enjoyed those gifts most all my life.

Because my school did not have a “track” team, the only running option if I wanted to run was cross country, so I did that. And we’d run hard and far and sometimes, on some road courses, it became really difficult and you’d see the pain in the other’s faces and every so often you’d see one just stop and bend over – head down and hands on their knees. And I’d suck in a little more air and keep running, with that image pounding through my brain – taunting me…..like a siren on the rocks trying to draw my ship to crash on the reef and make me quit the race. And I am sure that there were times in practice that I did stop and walk for a few steps before struggling to regain that momentum and start running again. But never in a race.

I ran until my knees denied me any more of it. I always ran alone but at one point, I thought it would be nice for my wife to join me; thought it would be good for her as well. So I convinced her to try. On our first run she threw up and essentially collapsed – after only a half mile – wouldn’t talk to me for the rest of that day or night. But she came back a couple of days later and ran again. And again, after that. And within a few months, she was able to do 5 miles at a decent pace, without stopping, and was able to have a conversation while doing it.

Partly because I am just too damned competitive and partly because I like to play and partly because I try to always push the envelope, at the end of every run I would always sprint ahead and beat her to the car. And she would get discouraged or frustrated. But one day it occurred to me to remind her of where she had started and of how far she had come. Strength, growth, and stamina come slowly, often barely discernible. It’s so easy to get in the daily run and end up finishing second that you lose sight of your remarkable progress. You have to stop and look back once in a while.

And I want you, dear reader, to do the same. You could not have possibly been accomplishing whatever it is you do daily now, a year ago. You didn’t have the tools, the strength, the stamina to do so. But you are doing it now. And those gains came slowly, unoticeably. Yet over the course of a year, look how far we have come. Never think you are not moving forward, the needle on the progress scale can be hard to discern sometimes; so once in a while, look back where you were. You’ll be surprised how far you’ve come.

But more than ever before, the weight, the drag, of age feels like a deep and torturous mile on one of those multi-mile runs. And more and more that siren keeps calling to me. You get deep into the run, only a few miles left, you’re tired and you hurt and you just want to stop and put those hands on those knees…….I work so hard to focus on the cadence, the rhythm, one step, another step…..keep the pace and ignore that siren over to the side……

I so wish a downhill stretch comes along soon