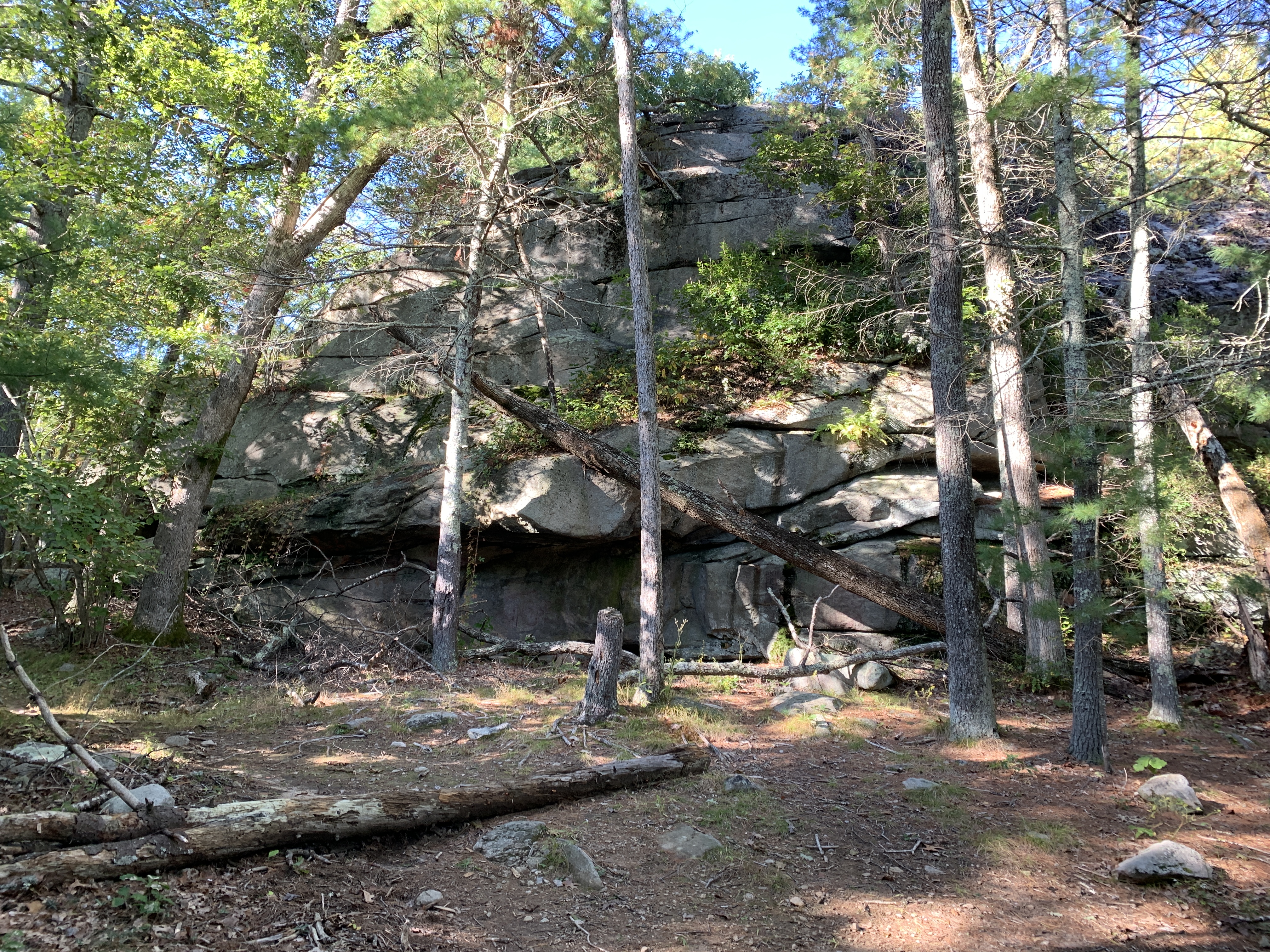 Another magical stroll through the deep woods Friday. This 12 mile hike was mostly on land now controlled by the Nature Conservancy; beautiful land and well protected against the ever-spreading sphere of expansion. We are blessed in Rhode Island in a lot of ways, but especially in how much open land has been preserved and protected as wild and natural; estimates are 70% of the near 400,00 forested acreage is protected. And the land is stunningly beautiful.

This particular hike was mostly new to us, but at least one section was a trail hiked many years ago. Back then, Wickaboxet Forest was State land, but not well maintained – if at all. The trail was sparsely blazed and heavily grown over in numerous areas. In fact the parking area for the trail head had not sign or other marking of any kind. I was there on that first hike for a specific reason; Rattlesnake Ledge.

For years I was a member of the Narragansett Archaeological Society; in fact president for a few years. And in 1939, the Society excavated the ledge. The results were not published until 1962 and I was, of course, still a child then, but I read about the excavation once I joined the Society. And I always wanted to see the site once I read about it. So many years later, maybe 15 years ago or so, I finally managed to get there. It was a horrendous hike, beginning with the aforementioned no signage for the trailhead, poorly blazed trails, and overgrown sections of trail. Atop that, it was horrifically hot – humid too – a right from the books RI late-July summer day. And the deerflies: oh my, the deerflies! Worst I have ever experienced in my life. For that hike of approx. 5 miles, they circled me, attacked me, besieged me, assaulted me, and bit me near to the bone. Worst hike ever. But I did finally get to see Rattlesnake Ledge, so some payoff there.

Since then, the Nature Conservancy took stewardship of hundreds of acres of adjoining land, including all of a good sized pond, and created multiple trails throughout. Adding in the State land at Wickaboxet, the trails can joined and done in a contiguous manner that would total 17 or 18 miles. And they are well maintained and well blazed. The State was stepped up their game since I was last there with a nice marked parking area complete with a signboard and trail maps. And being late September, no deerflies!

There is a long list of what made this hike so nice, but for me, the apex of that list was the privilege of seeing something like 8,000 years of human habitation. Rhode Island was heavily influenced by the last glacial advance and retreat around 12,000 years ago. Narragansett Bay was carved but was merely the effluence of several major rivers – what is now the bay was then a fertile river valley. Native inhabitants were scarce and nomadic back then and would be found mostly inland on the (slightly) higher ground, as they hunted the food sources that was following the glacial retreat and the plants growing in the wake. But over thousands of years, the sea level rose and flooded the river valley with seawater. And with that came a vast new food source: shellfish. Once the natives discovered this, they quickly took advantage of it. Around the same time, they were in the midst of a long transition of culture, settling down and creating villages: a society. Of course as history shows, this led to a whole host of other problems for them, but that for another time.

Rattlesnake Ledge was a rack shelter; a campsite, an overnight stop, a rest area for the nomadic natives. Primarily Early Archaic in occupancy, it would be on the short list of the older sites in RI, the bulk of which are Late Archaic and Woodland (Ceramic), with each passing millennia exponentially increasing the population here. There was, as I recall from the report, some evidence of occupancy even through Woodland, but it was primarily a extremely old and early site in our area. And it always affects me when I stand on ground that the earliest inhabitants also stood upon. That tie, that bond, that transcends thousands of years, is strangely calming and deeply satisfying. Hard to explain why, frankly not sure I know, I suspect it has something to do with how I imagine they felt looking out over the exact same landscape all those years ago and feeling much the same way myself – appreciative for the  chance to enjoy its beauty.

This hike is special thanks to that early native campsite; but frankly there are similar sites literally littering the State, certainly tens of thousands more closely to the coast where the occupancy density is pretty much maxed out, but still heavily occupied in the non-coastal areas. There is no doubt that I have walked and gazed upon dozens of other such sites in previous hikes; just didn’t know it not having read a site report on them to know so. No, prehistoric occupancy is not uncommon here in RI; not at all. So while the shelter being there made it nice, that wasn’t the icing on the cake. For on this hike, there are cellar holes aplenty. Based upon my limited knowledge of the history of cellar holes, and using dates form a couple of historic cemeteries on the trails, these range from late 1700’s right through early 1900’s. Coupled with the bands of occupancy in the rock shelter, that results in near continuous (albeit limited) occupation for the last 8,000 years. And that is remarkable. The land is the same land, essentially at least. Obviously many generations of tree growth come and gone, but the same basic wooded land littered with the countless rocks and boulders; Rattlesnake Ledge being the centerpiece here.

I always leave hikes tired of course, but greatly fulfilled spiritually. Nature replenishes and renovates the soul; always. But this hike even more so, to me, thanks to the commonality of the love of nature that runs through all of us, not just vertically and horizontally through society and geography in this plane on this earth, but also the 3rd axis of time. It is a thread of commonality and community that knits us all together through time. We are all the same – always have been. And that is a warm and reassuring feeling. And gives me great satisfaction on where we are as well as great hope on where we are going as humans.